A Winter to Remember on the North Shore

On the road again.

Just can’t wait to get on the road again.

The life I love is making music with my friends

And I can’t wait to get on the road again.

On the road again

You can hardly blame Greg Cole for not including this Willie Nelson tune on his top 10 list. Cole recalls spending just three nights sleeping in his own bed over a six-week period this past winter. He says his operations manager Shaun Powers and several other key employees also found themselves on the road rather than at their homes much of the winter.

Were they making music together as friends? Heck no. They were battling snow on Massachusetts’ North Shore—like just about everybody else at Cole Landscaping & Irrigation Inc.

By Feb. 15, Mother Nature had already pounded Cole’s North Shore service area with four major storms, dumping more than 114 inches (9.5 feet) of snow on the region. More storms and snow followed, and kept everybody busy into March, which recorded an additional 8 inches of snow. 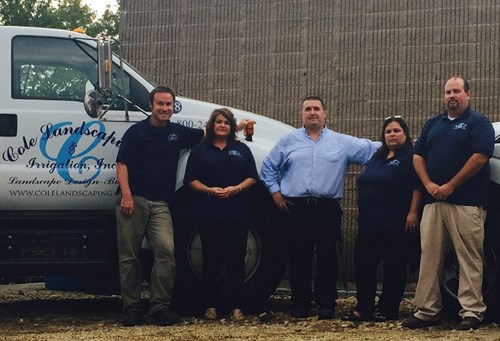 Here are some (but not all) of the folks taking Cole Landscape & Irrigation to the next level. From left to right: Kenny Burke, Barbara Evans, Greg Cole, Jackie Guyotte and Shaun Powers.

“It was nothing like I had ever been through before,” says Cole. “We would sleep in parking lots. We put guys in hotels. We fed them. You name it and we did it just to keep our guys going. Other companies did the same thing, arranging transportation for their guys, putting them up in hotels, buying their food; they did fine. Companies that didn’t do those things had people walking off of their jobs.”

The snow piled up so fast, he and other snow management company owners had to find places to put it. They ended up dumping the snow in the empty lots owned by other contracting companies. “They were charging $100 to $150 a load to dump the snow. There was nowhere else to dump it,” says Cole, who gladly paid the fees.

“We would go home to eat and take a shower, but that was about it,” recalls Cole. “We were running operations 24 hours a day, seven days a week through February and into March. We service several medical buildings, HOAs and many office parks. They must be done on time with no excuses.”

All of Cole’s snow contracts, which are capped according to snowfall totals—one price at 40 inches, another at 50 inches, etc.—are commercial.

Cole looks back on this past winter with pride (and dare we say, a touch of wistfulness) given how loyally his employees performed.

“I love interacting with my staff and my employees,” Cole says. “It is truly a great high for me. Although we sometimes yell and scream at each other, like any dysfunctional family we always come out smiling and always get back to what’s important—focusing on each client getting the results they deserve and expect from us.

“Outside of our great field staff, I have a solid core of managers. Shaun Powers, Barbara Evans, Jackie Guyotte, Kenny Burke and Ronnie Martineau work right beside me at all hours,” he continues.

“Despite the long hours demanded by weather, the Cole Landscape & Irrigation team rises to the occasion. I feel very fortunate to have the best time I’ve had in my 20-plus years of business.”

Cole founded his company in the early 1990s after stints framing homes and then mowing lawns for a small Boston-area landscape company and earning $10 an hour. Sensing that he wasn’t going anywhere in that job, he decided to strike out on his own.

Cole Landscaping is headquartered in Ipswich, Massachusetts, a coastal city of about 13,200 people located about 28 miles northeast of Boston. The region, which includes other historical cities, such as Salem and Gloucester, is known locally as the North Shore.

“We are extremely fortunate to be in one of the best areas of New England where homeowners truly care about the benefits of great landscaping,” says Cole. “We work in a 15-mile radius from our headquarters. There is a lot of traffic in our market, but it’s not as bad as in Boston.” 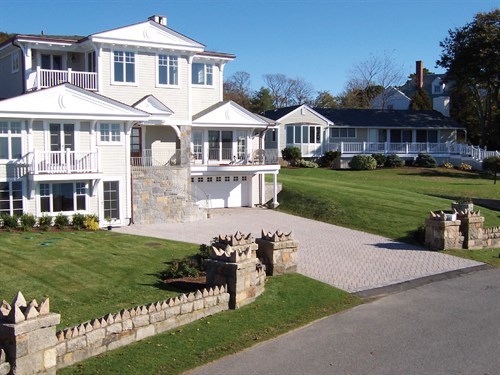 But this season, the Cole team had to wait until the snow quit falling before breaking out the mowers and the construction equipment. The winter storms, which didn’t peter out until mid-March, challenged every employee of Cole Landscape in making the transition into spring services.

“We had to get our maintenance, construction, irrigation and lawn care crews up and running, and all of their equipment serviced and ready to roll in about two weeks,” says Cole, still wondering how his mechanic managed to turn this all around. “It was truly amazing.”

“Our employees picked up the pace and pulled long days and weeks,” recalls Cole. “It was a little crazy, but it was a good crazy, too. It’s something that when you look back on it, you say, ‘Geez, everybody produced. Everybody did their jobs.’”

Of course, the company expects employees to reciprocate by delivering a consistently high level of customer service—even when it’s beyond their customary duties.

“We got a call at 4 o’clock recently from a client who has a commercial building,” says Cole. “He told us he needed a full cleanup within 24 hours for a company event taking place the next day. It was a monumental effort to schedule and make his deadlines. The Cole team pushed to get it done on time and in the quality expected.”

Even so, he admits: “Just like every other landscape company, we have issues to deal with involving employees and clients. We deal with them quickly, learn from them and move forward. 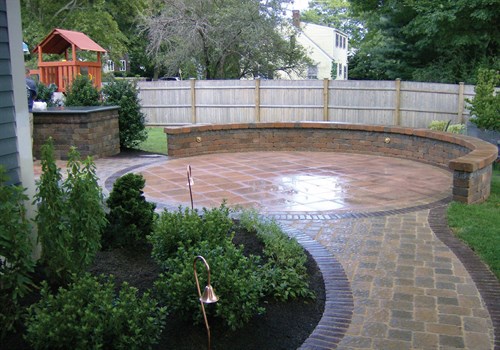 Greg Cole, founder and owner of Cole Landscape & Irrigation, is encouraged by the renewed interest homeowners in his market are showing for outdoor living projects.

Cole has been working with business consultant Bob Coulter with JP Horizons, focusing on building his company’s front-line employees, as well as its management team. Bob has been teaching us “to stay in our lanes” and challenges us to perform the best we can.

“Our biggest challenge this season has been not promoting people fast enough within our company,” says Cole. “We have some great talent here, and I feel we could have been further ahead if we had promoted faster. That would have allowed us to bring on more talent and grow.

Cole says, based on his company’s year-to-year revenue growth these past few years, he is planning to add an additional 18 to 20 employees to his company by the end of the 2018 season.

“Our goal is to continue to hire the best people we can and treat them the best we can, and not just financially,” says Cole.

One of the most encouraging signs he’s seeing in his market is the rebound in high-end design/build projects. Cole Landscape picks up most of its new projects through referrals.

“Outdoor kitchens are hot right now, as well as other features that keep people entertained at their homes. People love to be outside,” says Cole. “It seems like many people are now spending more money on their properties more so than they have in the past five years.”

One of the most valuable lessons Cole says he has learned—and the best advice he would offer to anybody else starting or running a small business—is “always know your numbers and hire the best team you can.”

He says a friend once told him “business is won by the pencil, not the mower.” It’s something he’s taken to heart. “Without knowing your numbers you cannot grow profitably,” he says. “And without a really good team, it is infinitely more difficult to get the quality your client wants.”