Getting Employees To Rest After Snowstorms

Managing the welfare of your employees is as important as managing the snow during a storm.

One big difference between routine snow operations and responding to long-duration, major storms is the need to consider the toll that the work takes on employees. “We try to plan in some downtime for people,” Tim Gibbons, CEO and president of The Service Innovators in Chicago, explains.

For example, if there’s no second-shift operator available to run a particular piece of equipment, he may shut that equipment down during the night for six hours or so to give the primary operator time to rest.

“We’ll get a place under control; we’ll keep it manageable during the prime business hours, and then we may reduce the operation,” he explains. If a parking lot at a mall needs to be kept clear during the day, perhaps after-hours is the time to give the crews a break. “Or I may shut the machinery down and put a couple of trucks in to run the main roads, so access is always there,” he adds. 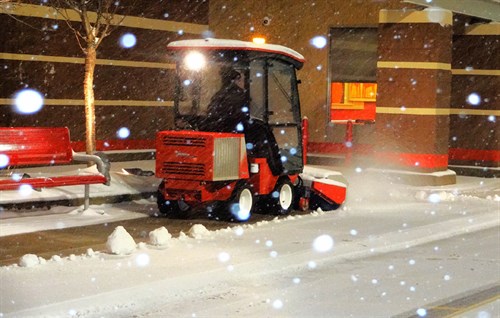 Larger sites and bigger clients should be assured that there will be a constant presence during a storm. Photo: Empire Landscaping and Snowplowing

It’s critically important during storms to be aware of “the human fatigue component — how far can you stretch people,” Gibbons continues. After all, managing the welfare of employees is as important as managing the snow. Leading up to forecasted storms, Gibbons tries to give crews as much rest as possible. Then, during storm events, there are constant reminders for crews to take breaks, drink water and carry snacks in the truck, “so they can stay alert and sharp.”

And he identifies convenient places for crews to rest so they don’t have to go home, sometimes even renting hotel rooms for them. Storm response can mean long hours on the job — 36 or even 48 hours, in some cases — and the more fatigued employees get, the greater the potential for a mistake or accident.

That isn’t necessary during smaller snow events, but during bigger storms, says Tom Canete, president and CEO of Canete Snow Management. “It’s easier to switch your crews out of a hotel room,” he explains. “than to send them home and hope they come back.”

Next post New Life for an Urban Texas Park