If you want things to run smoothly during snow events, you need to develop a strategy for the off-season.

With snow event after snow event descending on the Great Lakes region last season, snow-removal companies had to run hard every day to support their continuously active crews. But that’s what makes the off-season so important, experts say. If you want things to run smoothly during snow events, you need to develop a strategy for the off-season. To get a better understanding of what that entails, we talked to four successful snow-removal organizations operating in the Great Lakes snowbelt. Those are the cities that often land on the top-10 list of the snowiest U.S. cities, year-in and year-out, so they know what they’re talking about.

We learned that as soon as the snow season ends, the leaders of the business don’t take off their boots and put their feet up. In fact, at the first hint of spring’s thaw, they kick preparations for the next season into high gear. Greenwise Organic Lawn Care and Landscaping in Chicago thanks their current customers and incentivizes them to get on-board early for the next season, then crunches numbers, checks equipment and evaluates ops during their off-season. 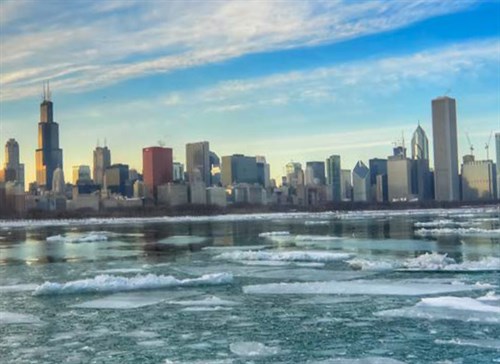 “As soon as snow season is over, we reach out to all our clients to thank them for their business and offer them an enticement to pre-pay and sign up for next season while it’s still fresh on their minds,” says Michael Kormanik, Greenwise marketing director and snow dispatcher. Internally, Greenwise takes the time to recognize the efforts of its winter crews.

“We spend the time doing what it takes to make sure we don’t have to replace our crews,” he explains. “We take the time to give pats-on-the-back, say thank-you and dole out Starbucks gift cards to sow goodwill.”

It’s also the time for Greenwise to sit down and analyze its just-completed snow season and put together an accurate budget for next season. Kormanik ask himself the following questions: “How’d we do? What were the most profitable routes? Most profitable services? Where were the unexpected expenses? Did everything get billed? Did all the bills get paid?”

The company then determines what equipment needs to be replaced before the next snow season arrives. Management talks to the crews about what brands performed best and what equipment was loved — and what was hated. It’s also a time for them to look at the routes: Are they too long or too short? How effectively was snow cleared at optimal times for its clients? 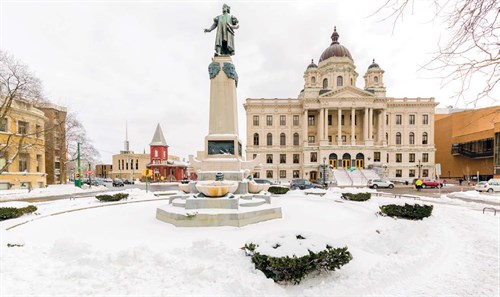 Getting Ready For The Brutal Syracuse Winter

Now it’s time to move on to two major snow-removal companies operating in Syracuse, which consistently gets more snow each year than any other city. 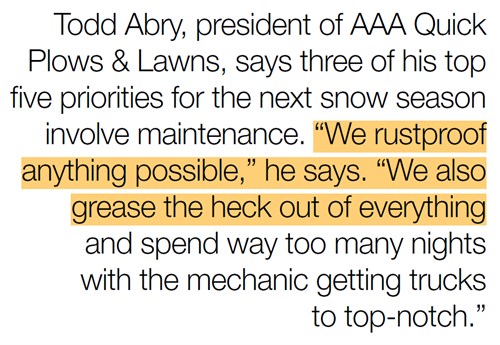 AAA Quick Plows & Lawns derives 60 percent of its snow-removal revenues from several large condo complexes and a mix of residential and commercial accounts. They had their eight trucks out 27 times during the last snow season.

Todd Abry, president of the company, says that three of his top five priorities for the next snow season involve maintenance. “We rustproof anything possible,” he says. “We also grease the heck out of everything and spend way too many nights with the mechanic getting trucks to top-notch.” Rounding out his priorities are buying salt before supplies run out, and performing the rustproofing and greasing a second and third time.

Another Syracuse-based company, Yardsmith, brings in 30 percent of its revenues during the snow season, when it employs a crew of 14. Residential clearing makes up for 70 percent of its client mix.

During the off-season, the first step for Yardsmith is to evaluate its client base. “This is the time we consider limitations on who we’ll provide snow services to,” explains Yardsmith President Craig Smith. “Many driveways equal many headaches.”

The next tasks on Smith’s list include lining up and pre-qualifying new subcontractors, considering new vehicle and equipment purchases, and planning driveway routes their newest snowplow vehicle, the Wrangler. 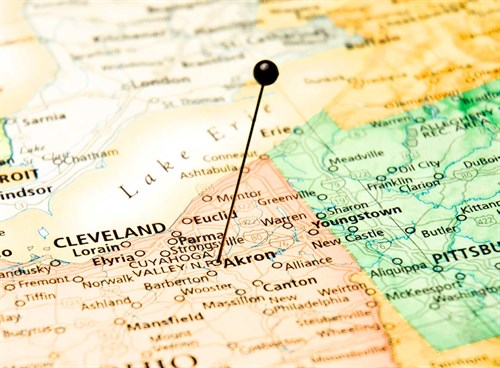 At the University of Akron, located south of Cleveland, major prep for the coming year’s winter storms starts in late spring. The school has to clear the lots for thousands of students every day, and since the campus is in downtown Akron, its crews share some snow-removal duties with plows operated by the city. When spring arrives, it’s time for UA’s management team to estimate what it will need for the upcoming winter in terms of road salt and brine; they base their budgets on weather trends from the past, as well as predictions for the future. The school also determines the order in which its numerous campus parking decks, sidewalks, and student pedestrian pathways will be cleared.

“We are fortunate that we have two salt domes that hold up to 600 tons of supply, and are able to keep all of our vehicles and equipment in a heated garage,” says Andy Henry, manager of grounds, special services, recycling, athletic and parking maintenance. The leader of a 30-person snow removal team, Henry starts his off-season planning by focusing on education and networking. His team members regularly attend seminars and conferences, and spend time networking with major snow-removal management professionals at the other northeast Ohio campuses.

“It’s amazing how much you can learn from placing a few phone calls and attending training with your peers,” Henry says. His other off-season planning activities include repairing all vehicles and equipment, and going over documentation and evaluation of the snow event history for the previous year.

Next post Story Of A Landscape: Designing A Colorful Landscape Despite A Blend Of Shade And Sun

Previous post Is It Worth Your Time And Effort To Blog?