Home » PLOW » Scaling Up On Manpower Before A Big Storm

Scaling Up On Manpower Before A Big Storm

Sometimes manpower is needed more than equipment when ramping up for big snow events.

When weather models agree that there’s a high likelihood of a major snow event, Tim Gibbons, CEO and president of The Service Innovators in Chicago, says he leases additional equipment such as skid-steer loaders. “We have them dropped off in strategic locations. We double down,” he explains.

He also calls up extra drivers who have their own equipment, as well as other contracted workers to operate the supplemental equipment he leased. The process of identifying drivers and equipment that can be called upon when needed begins in the fall, Gibbons says. In some cases, they are retired drivers who are willing to be called in during an emergency; in other cases they are working jobs in construction and know their regular job is going to be shut down due to the incoming storm. 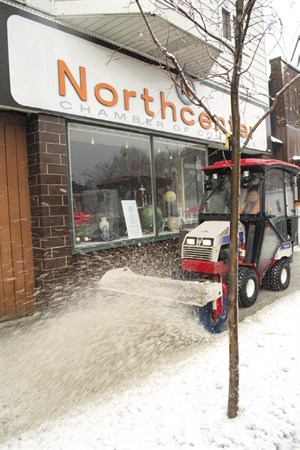 Keep a property manageable during peak business hours knowing you can redeploy those resources elsewhere during slower times. Photo: The Service Innovators

“We also get additional laborers, including through temporary labor companies. I tell them that I need snow shovelers, I need them properly dressed, and I need X-number of them at these locations at this tentative time. So they go to work on getting that personnel for me, and then let me know what the numbers look like,” Gibbons says. Workers who are recruited this way may not be experienced in snow removal operations, but “when you’re supplementing an existing crew, you can drop in an able body and they can get direction from the crew on-site.”

Vincent Di Leonardo, president and CEO of Empire Landscaping and Snow Plowing in New York, says he always prepares for the worst and maintains enough big equipment at each site to handle the storms when they come. He needs manpower more than equipment when ramping up for big snow events. 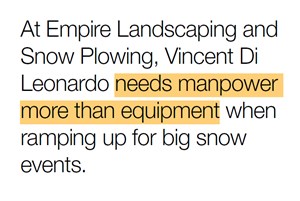 He has developed relationships with subcontractors who are not necessarily snow contractors, like painting and roofing companies that have heavy equipment available and employees they want to keep employed during the winters. “I like to go that route for big events,” he says.

Tom Canete, president and CEO of Canete Snow Management in New Jersey, says when a big storm hits, his preference is to almost double up on everything he needs, from equipment to manpower.

“If you don’t have spare equipment around and extra drivers and operators, that’s challenging to do [at the last moment],” he says. That’s why he has worked to build relationships with companies in other industries that have extra equipment and drivers he can call on when needed. “We mobilize that equipment and have it on our sites,” he says.

Another strategy that Canete uses during big snow events: Try not to move a lot of equipment from one site to the next. “A truck that normally goes to three lots stays in one,” he explains. And when there’s big snow in the forecast, employees are called in well before the snow starts so they can be sitting on their lots, ready to roll when needed.

In addition to ensuring he has enough equipment and manpower in place, for example, his pre-storm checklist includes smaller items like fuel (make sure the tanks at your yards are full, as well as the transfer tanks on individual trucks) and spare cellphones.

Canete tries to plan for every contingency. “I’m a big procedure guy,” he says. “During a storm, you have to think of everything.”