Companies introduce new developments in equipment every year, but which ones should you have your eye on? Turf editors think these 5 are the top picks.

Thousands of contractors travel to Louisville the third week of October each year seeking new products and other innovations to help them save time, reduce costs and produce more with less effort and fewer inputs. The recent GIE+EXPO at the massive Kentucky Expo offered up 75 new products — an unusually large number, even for such a large trade show. Investigating 75 new products in two short days is a tall order. Even so, Turf’s editors winnowed what they saw and picked five of the most significant or unique products.

Here are the coolest products we saw at this year’s GIE+EXPO: 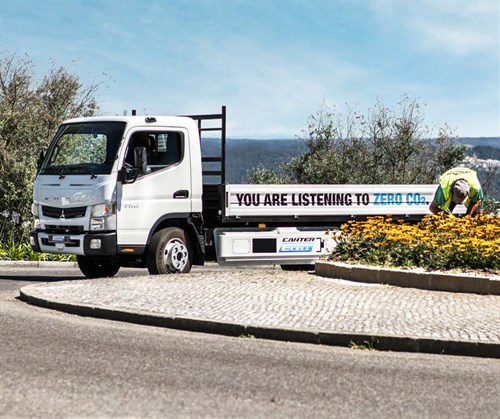 Don’t count out adding all-electric trucks to your work fleet in the near future. Mitsubishi Fuso Truck of America (MFTA) displayed its FUSO eCanter all-electric truck at the GIE+EXPO, and claims the battery-powered truck can return a 64 percent savings in operating costs compared to an equivalent diesel-powered vehicle. The company bases its claim on the performance of eight prototype vehicles in real-life route service this past year. MFTA said that beyond the impressive operating cost savings, the trucks also produced zero CO2 or other tailpipe emissions, and even delivered a 37 percent reduction in CO2 emissions compared to diesel-powered trucks — and this after accounting for emissions generated by the power plants creating the electricity needed to recharge the batteries. The company is starting a small production run of these environmentally friendly vehicles for several markets around the world and expects the first all-electric trucks to reach the U.S. in 2017. 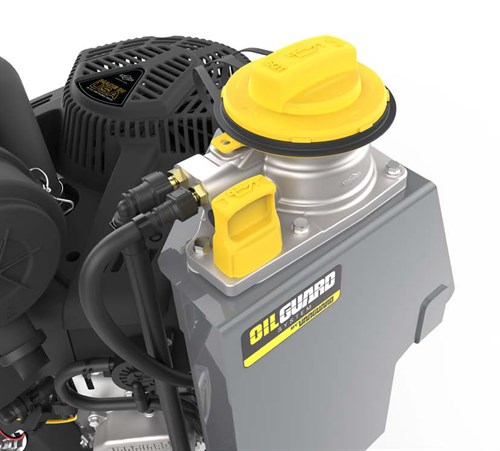 When we arrived at the Kentucky Expo Center the day before the GIE+EXPO’s official start, we saw a row of five or six bright red Ferris commercial mowers lined up in the parking lot in front of one of the building’s entrances. Venturing over to look at the mowers we saw that each of the engines had a 5-quart rectangular aluminum tank neatly fitted to the mowers’ engines. We were puzzled.

It turns out we were looking at Briggs & Stratton’s Vanguard Oil Guard System fitted to Ferris mowers powered by Vanguard 810cc EFI and Big Block engines. The Vanguard “dry sump” system (because the oil is stored externally in the aluminum oil tank) offers significant advantages over standard “wet sump” systems where the oil stays in the engine’s sump, Briggs & Stratton folks told us.

Because the system continuously exchanges oil between the engine and the reservoir external to the engine, the oil will stay cleaner, resist thermal breakdown and the engine will run cooler, explained Rick Zeckmeister, vice president of marketing and planning at Briggs & Stratton.

This means that instead of having to change the oil after every 100 hours of use, an operator can extend oil service intervals to every 500 hours. Also, because the tank is external to the engine, oil changes are a snap because the filter is easy to access and changing the oil is a tool-free process that can be accomplished in 10 minutes or less.

The Vanguard Oil Guard System is available on Ferris commercial models for the 2017 season. 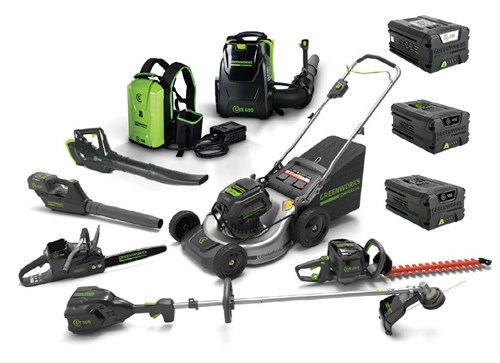 Landscape pros wanting to check out and test the firm’s electric products won’t have trouble finding them. At the GIE+EXPO, Greenworks announced it is partnering with SiteOne Landscape Supply for nationwide distribution. 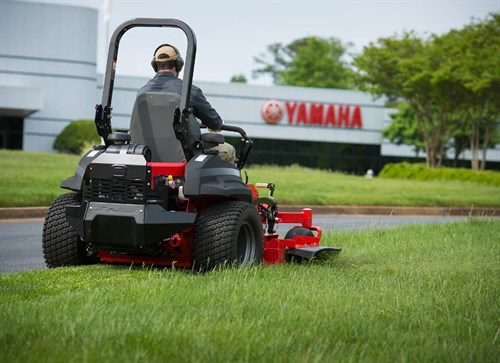 Yamaha is the latest major engine manufacturer to see commercial landscape contractors as a fit for its engines. At the GIE+EXPO, Yamaha launched its first-ever V-Twin EFI engines on select models in Gravely’s Pro-Turn 200 and 400 lines. The two Yamaha engines for our market are the MX775 V-Twin EFI (29-hp) and the MX825 V-Twin EFI (33-hp). The larger engine will be an option on Gravely’s Pro-Turn 360 and Pro-Turn 472 mowers, while the 29-hp Yamaha engine will be available on the Gravely Pro-Turn 260 and Pro-Turn 452.

“We’re honored that … Yamaha has chosen Gravely to be their initial launch partner,” said Matt Medden, Ariens Co. vice president of marketing. “This project has been several years in the making, and Gravely, together with Yamaha, can’t wait to see how our customers respond to these new engines.”

Jim McPherson, Yamaha’s Outdoor Power Equipment division manager, said that his company’s vertical V-twin engines provide a smooth, even cut with consistent speeds even in difficult high-grass conditions. Unique features of the engines include easily accessible hatches that make for quick and simple maintenance, a protective grass screen that protects against debris clogging, and a specially designed stainless steel muffler.

Gravely Pro-Turn zero-turn mowers equipped with a Yamaha EFI engine will be available in Gravely dealerships in early spring 2017. 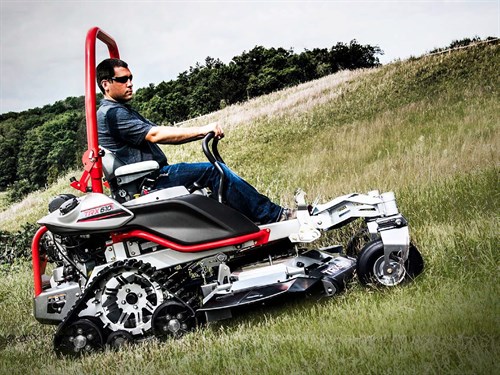 5. Altoz is right on track

You wouldn’t expect a mower to become a social media star, but that’s just what has happened with the industry’s first tracked zero-turn mower. The TRX, introduced this fall by Minnesota-based equipment manufacturer Altoz, racked up 3.7 million video views on its Facebook page as of mid-December. Altoz, which made a splash several years ago at the GIE+EXPO by entering the commercial mowing market with zero-turns featuring both solid engineering and style, is promoting the TRX as the best (and safest) option for commercial cutting on slopes or over wet and rough terrain, because of its rear-mounted tracks and torsional suspension system.

The TRX is available with 61- and 66-inch cutting deck widths, and the option of either Kohler Command Pro EFI 33-hp or Vanguard EFI 37-hp engines.