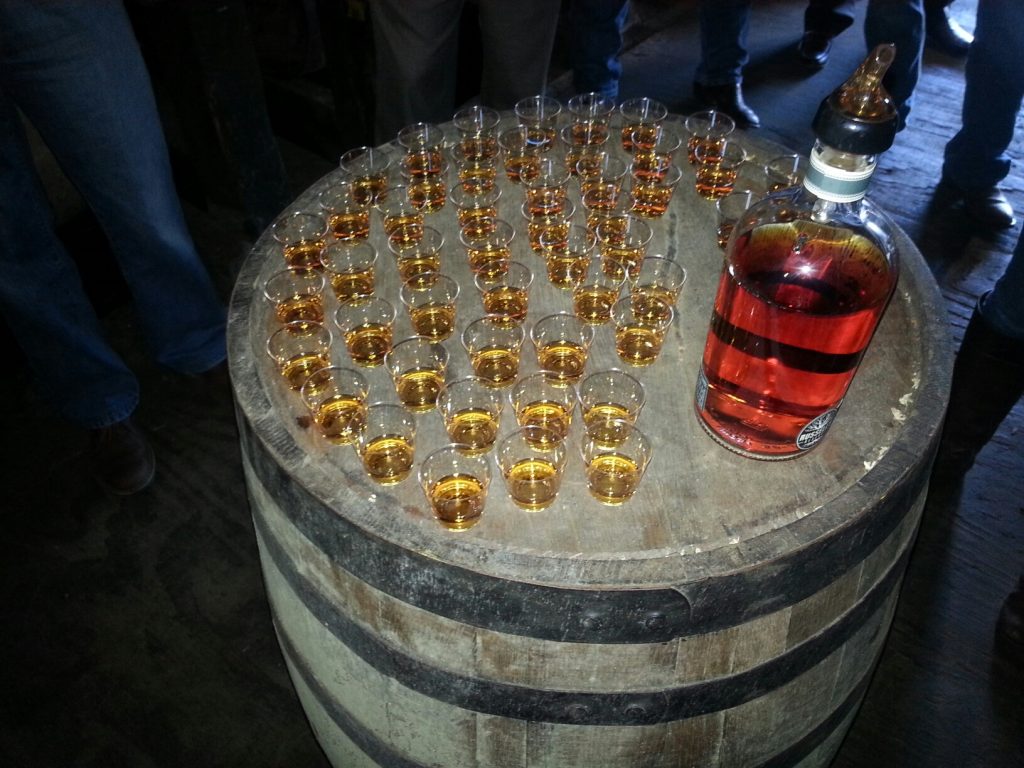 What do you do when you turn 100? You celebrate it with a wee dram or two of great bourbon whiskey, right?

The folks at equipment manufacturer Ariens, based in Brillion, Wisconsin, jumped the gun by a couple of months on Tuesday, October 20 at the Wild Turkey distillery in prim little Lawrenceburg, Kentucky. But who cares? There’s never a bad time to celebrate being around for 100 years.

Ariens kicked off the centennial celebration of Gravely, a company it acquired in 1982, with the rollout of the most impressive line of shiny new orange Gravely grounds management equipment ever. Members of the media and a small number of landscapers put the equipment through its paces on the 100-acre grounds of Wild Turkey property. We couldn’t have asked for better weather—temperatures in the 70s, blue skies and gentle breezes. Nor could we have asked for more gracious hosts. But, let’s get back to Gravely and the new stuff.

Benjamin Franklin Gravely of Dunbar, West Virginia, introduced his power-driven push plow in 1916. It used belts to transfer power from an Indian motorcycle engine. He called it a motor plow. He incorporated the Gravely company and, in the middle 1920s, marketed a 2 ½-horsepower Model D tractor from a manufacturing plant in Dunbar. According to several sources, the Studebaker company eventually bought a majority interest in the company, which was moved to Clemmons, North Carolina. Using a rear-engine design, Gravely began marketing a four-wheel garden tractor in 1964. The Ariens company bought Gravely in 1982 and eventually discontinued production of tractors.

In a real sense, the Gravely event at Wild Turkey marked a return to Gravely’s roots as it introduced a two-wheeled tractor, the Pro QXT. Ariens had two units to demo, one affixed with a 48-inch blade and the other with a 44-inch power brush. Attaching and reattaching the labor-saving implements was a snap, even for us desk-bound editors. The walk-behind tractors—powered with 14-hp Subaru engines—offered more speed and power than any operator would ever need to move snow or other debris from a sidewalk or surface. The poly blade of the blade will be particularly useful in clearing pavers or other delicate hardscaped areas of debris without damaging them.

Here’s a brief rundown of the other new stuff from Gravely, most of which will be available at dealers now or by this coming January:

Gravely showed off its re-designed Pro-Stance series of mowers.

Stand-on mowers are the fastest growing category of professional cutters on the market, and for good reason—their easy to operate, they have a lighter footprint to similarly sized sit-down zeros and they are (for most operators anyway) more comfortable to use over the course of a long day on lawns. 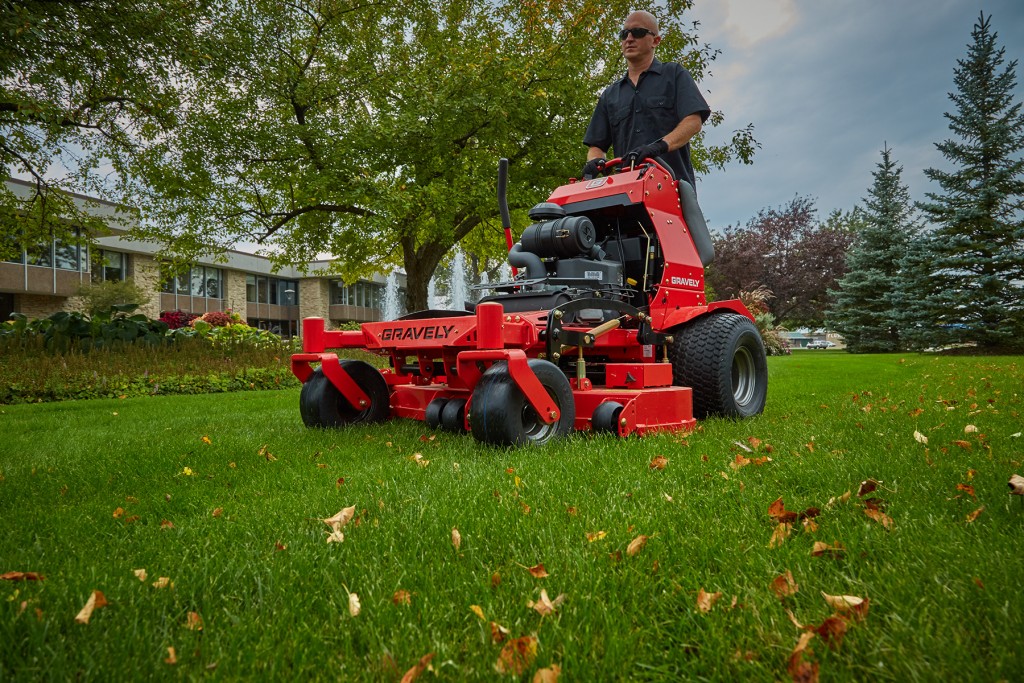 The Gravely Pro-Stance features a large operator pad, foot pedal height adjustment, and flip up suspension platform to help reduce fatigue during all-day jobs. The unit’s foot pedal height adjustment allows operators to easily change the height of cut or feather the deck over obstacles while mowing, and the foot pedal provides greater leverage for operators of all sizes and for those who may have difficulty with a traditional hand lever lift.

In addition, the new deck level system features an exclusive design requiring only a four-point adjustment, reducing parts by 50 percent, which helps the mower maintain its best cutting performance. The deck level system also eliminates deck hanger welds, resulting in a flat deck and improving cut quality. A flip-up deck pin was added for easy access to the vital areas on top of the deck.

The Pro-Stance also features Gravely’s new X-Factor II Deck, a seven-gauge, all-steel welded deck that comes backed with a lifetime warranty. The half-inch deck has an integrated wear bar on its front with two additional gussets to guard against the leading edge and to prevent baffle bending. The deeper deck also allows grass to move more freely through the space, improving efficiency and quality of cut.

Also new on the Pro-Stance is the Hydro-Gear ZT-3400 transmission.

It boasts an 1 1/8-in. axle for heavy loads to take the wear of any commercial cutting condition. The transmission also supports speeds of up to 13 mph and is strategically positioned on the machine to provide a lower center of gravity for increased hillside stability. In addition, the 3400 transmission has 89 percent fewer leak points than a traditional pump and wheel motor system.

Other performance upgrades to the Pro-Stance series include improvements to the transport lock out, thigh pad, and grip on the dial height-of-cut. The Pro-Stance features Superior Traction Technology (STT) radial rear tires, to help operators overcome challenging mowing conditions with less damage to the turf they are working on. Puncture-proof semi-pneumatic front tires make the Pro-Stance a long- lasting, durable machine. 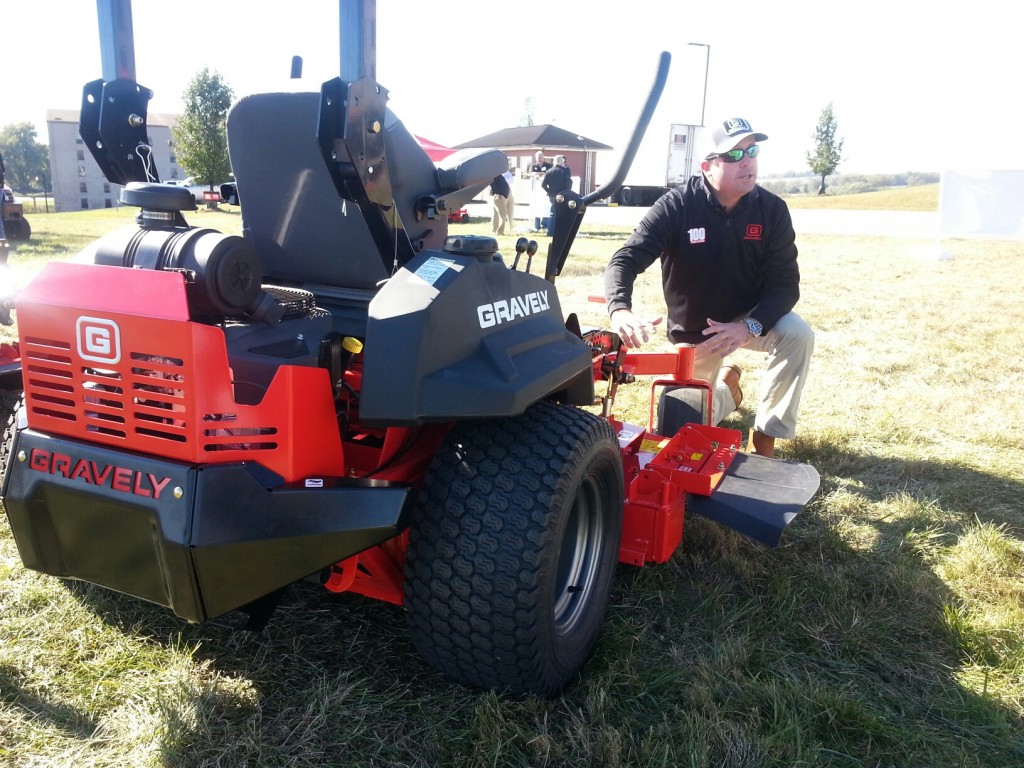 Finally, let’s get into the re-designed Pro-Turn 200 and 400 Zero Turn lineup, which we got a chance to operate.

Features of these sleek work machines include: