Fond Memory of the Gift of a STIHL Chain Bar

I have in my possession a guide bar for a STIHL chain saw. The guide bar, which Hans Peter Stihl signed in a small, neat script with a black Sharpie, measures precisely 18.5 inches long. I keep it on a ledge above my desk in my office. As I don’t own a chain saw, the guide bar has no practical value to me. I keep it because of its uniqueness and the signature, of course, but mostly because of the memory of a panic-inducing event leading up to receiving it.

As you continue reading this short account, you will learn that the event revolved around the purchase (unintended) of a cheap blue sport coat. We’ll get back to that presently.

The memory of acquiring the chain bar popped into my mind upon receiving a recent press release from STIHL Inc. announcing Hans Peter Stihl’s birthday. He turned 85 this past April 18. It’s not often I receive a press release announcing someone’s birthday. In fact, that was the first such announcement I can ever recall receiving. (But, then again, I’d never been gifted a signed chain saw guide bar before either.)

While you certainly recognize the name STIHL through the bright orange outdoor power equipment products it manufactures and sells, likely few of you have never had the pleasure of meeting Mr. Stihl himself.

Meeting during a special occasion 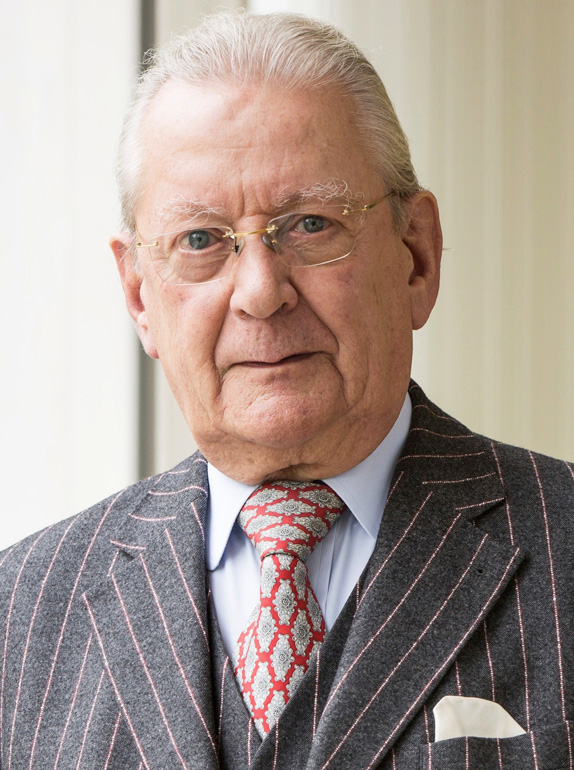 I have had that pleasure. And I can tell you he’s a gentleman, a real sport. I met him on a pleasant, sunny November morning in 2007. I was one of about eight or nine journalists invited to report on the dedication of the company’s state-of-art, $25 million, 60,000-square-foot chain bar production plant in Virginia Beach, Virginia. Mr. Stihl came from Germany to participate in the dedication.

Hans Peter Stihl is the son of Andreas Stihl, the founder of the company, who began developing chain saws in Germany in 1926. When demand for the saws increased, he built a factory.

In 1971, his son, Hans Peter Stihl, who had earned a degree in mechanical engineering, was made a general partner alongside his father. In the following decades, he and his sister Eva grew the company’s manufacturing and sales worldwide while also driving the steady expansion of the product portfolio. STIHL has been the world’s biggest-selling chain saw brand since 1971.

Although Hans Peter Stihl withdrew from the company’s day-to-day operations in 2002, he still goes to the office every day. I can also share with you that he’s a very sharp dresser, and that’s where the cheap blue sport coat figures into this short tale.

Over breakfast and prior to the small group of us journalists meeting Mr. Stihl in person, I noticed that my male colleagues were attired in sport coats and ties, which struck me as odd. You will rarely hear the words green industry editor and fashionista uttered together in the same sentence.

“Why the sport coats?” I asked a friend.

“It was requested when we received our invitation to the dedication,” he responded.

What to do? I panicked.

Rushing to a big retailer

Excusing myself from the group, I flagged a taxi and told the cabbie to find the first place I could buy a sport coat, any sport coat. And he did. He whisked me to the huge retailer where folks wear blue vests.

“Wait here. I’ll be right back,” I instructed the driver as I rushed into the store and grabbed the first 46R that I could find, an inexpensive blue blazer. But, as I already owned three or four other blue blazers, it occurred to me that perhaps I could wear the blazer only during the face-to-face with Mr. Stihl, and then return it for a refund later that same day. After all, I would only need it for perhaps an hour, if that.

It was a bad call. One huge challenge immediately presented itself – hiding the two sales tags hanging from the jacket. One tag dangled on the left sleeve and another was attached to a plastic thread on the jacket’s collar. I tucked the first into the left sleeve and the other I attempted to hide under the left lapel, which, disconcertingly, caused a small but odd fold to the top of the blazer.

Even so, all seemed to be going well as our small group met with Mr. Stihl at the company’s facility, and he patiently answered our questions regarding the company and the new factory. Then it was my turn to ask the three or four questions I had prepared.

Caught up in the moment and engaging with Mr. Stihl, I noticed that he, without hesitating to politely respond to my questions, for a blink or two seemed to glance to the top of my new jacket. A sliver of dread flashed through my consciousness. It wasn’t unfounded. There it was dangling in all its glory, the sales tag. While I ­(as nonchalantly as the situation allowed) re-tucked the evidence of my perfidy back under the top of the lapel, Mr. Stihl, nonplussed, graciously answered the remaining question or two I offered up.

Did I return the blazer for a refund? No, I did not. Following the meeting with Mr. Stihl, the small group of us editors toured the guide bar factory where, as unobtrusively as I could, I ripped the sales tags from the garment and put them in a pocket.

Did I make the decision to keep the jacket out of conscience or convenience? I can’t recall now. I do vividly recall meeting Mr. Stihl, in particular his graciousness, and touring the chain bar plant. I guess that’s the reason I’ve kept the guide bar that he signed for me that day. The guide bar is still in pristine condition. 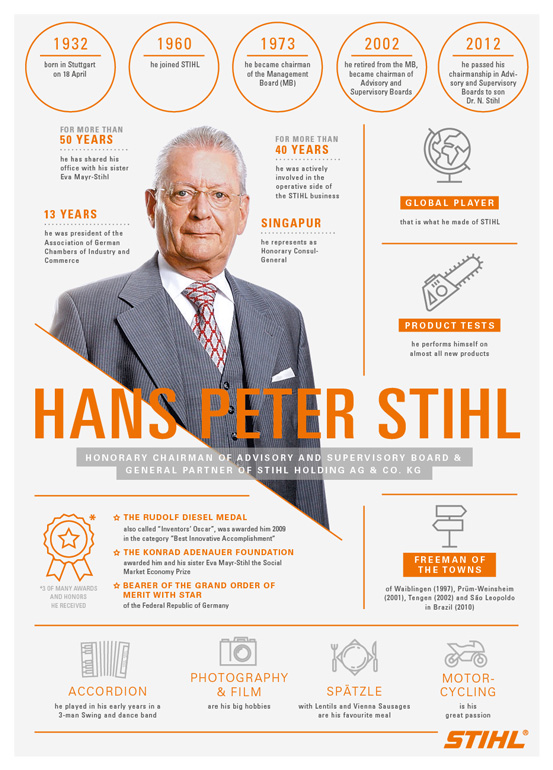