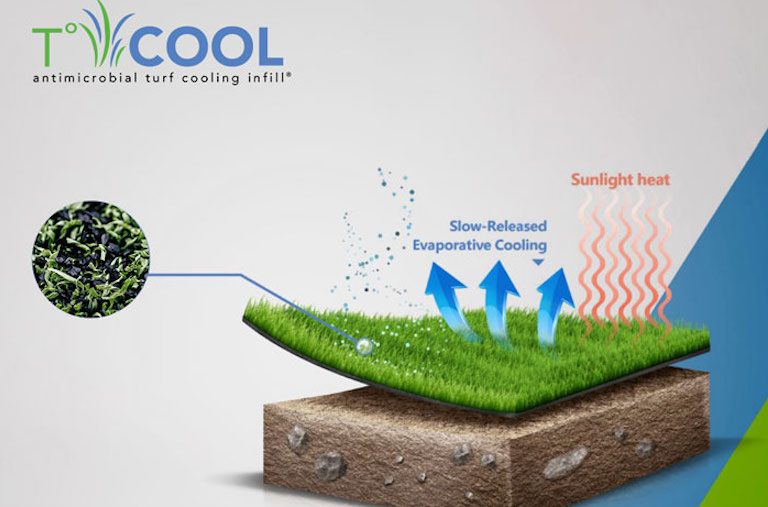 With nearly 20,000 synthetic turf fields in the U.S., and with approximately 1,500 new fields built each year, thousands of athletes, coaches, and officials must cope with oppressive, dangerous heat that consistently exceeds 140 degrees – and often reaches the 160 degrees – during the spring, summer, and early fall seasons.

According to The Centers for Disease Control and Prevention, heat illness is a leading cause of sudden death among high school athletes. Since 1995, 64 football players have died from heat stroke. Of these, 47 were in high school, 13 in college, two professional, and two organized youth. In 90% of these cases, the fatal incidents occurred during practice.

A new technology, T°Cool®, is combating excessive field temperatures and making the artificial turf cooler, safer, and more playable. T°Cool, which resists bacterial attack, is an eco-friendly evaporative cooling technology that provides a cooling effect on synthetic turf surfaces by coating the black crumb rubber infill. Today, approximately 80% of synthetic turf fields nationwide use black crumb rubber infill, due to the benefits of fiber support, cushioning, and consistency for performance. Once treated, the T°Cool solution continuously activates through rain, dew, humidity and/or watering the field, thus reducing the infill temperature/field temperature by an average of 30 to 50 degrees and bringing the overall field temperature closer to that of natural grass.

“Synthetic turf fields get dangerously hot, but there has never been a formidable and safe solution to tackle the oppressive heat. Most people don’t realize that watering a field provides only a very brief reprieve and often exasperates the heat issue,” said Chris Tetrault, inventor of TCool®. “With TCool, we can now pre-treat the black crumb rubber infill for synthetic turf and deliver a proven solution to make these fields cooler, safer, and more playable, and without compromising any of the key benefits.”

Tetrault adds, “According to the Synthetic Turf Council, key benefits of synthetic turf fields include less maintenance than natural grass fields, and the ability to dramatically increase usage and playability — independent of most weather. However, failing to address the dangerous heat issue that causes synthetic turf fields to exceed 140 degrees temperatures in warm weather months, and become unplayable, negates some of these utility benefits.”

As an added benefit, T°Cool’s evaporative cooling solution for artificial turf fields also reduces the coefficient of friction, thus diminishing the severity of turf burns, while effectively resisting the growth of harmful bacteria that grow on open wounds.