Attachments Are Abundant for Skid-Steer and Compact Track Loaders

With the multitude of attachments they can power, skid-steer loaders and compact utility loaders have only grown in popularity.

The Swiss Army Knife of the landscape design/build equipment world is hot. Or so says Paul Wade, marketing manager — construction for New Holland. For the last five years, sales of skid-steers have been on a steady climb upward, peaking for New Holland last year with 3,900 sold. The year before, they sold 3,700. Compare that with 2,500 skid-steers sold in 2011 and you have numbers that would make even the most hard-driving CEO smile.

So what gives? Is it because the skid-steer and its attachments have become even more beloved as the No. 1 tool a design/build business can have? Or is it that the economy has steadily improved since 2009 and housing construction has rebounded? Probably all of the above.

“There are more attachments being offered out there for design/build companies to utilize, and the skid-steer is the power source for those attachments,” says Wade. “Plus, the landscape industry is an increasing segment within the skid-steer industry, having doubled in volume over the last five years.”

Like New Holland, The Toro Co. has seen strong growth in the skid-steer category, especially over the last two years. Because of that growth, their compact utility loader business has grown along with it.

“The same contractors who are looking at skid-steer loaders are also considering compact utility loaders, and we attribute our success to delivering technological innovations within the compact utility loader category,” says Josh Beddow, marketing manager, The Toro Co. “Technology is taking a front seat in heavy equipment for the landscape industry and because of that contractors are looking for innovative solutions to streamline everyday tasks.”

Skid-steer manufactures also offer an abundance of attachments for their machines. For instance, New Holland offers more than 40 attachments, which is why the skid-steer has earned the nickname “Swiss Army Knife.”

In fact, in many cases, the attachments can make the machine, taking a landscaper’s investment to a whole new level.

What’s driving the purchasing of skid-steer loaders and CTLs in the landscape industry? One word: efficiency.

“The majority of landscapers and nurseries have one — if not a skid-steer than a CTL or maybe just a compact tractor,” Ward says. “Everyone sees the need to have the machine because it makes you so much more efficient, especially with the breadth of attachments out there. If you have to dig up a tree, there’s a tree spade. If you have to clear a landsite, there’s a root rake and a four-in-one bucket can help you spread topsoil. The machine is so much quicker than having guys do it by hand.”

Speaking of “guys,” Ward estimates a skid-steer can replace three to four workers — another perk for adding one to the fleet.

“If you look at the productivity you get out of digging, moving a pile or having someone dig a hole, with an attachment, you can do that in seconds compared to a couple guys digging a hole for planting a tree,” says Ward.

Beddow agrees, attributing the growth in compact utility loaders to contractors realizing the increase in jobsite productivity they can achieve through the use of these machines and their attachments. These machines may not be able to replace manual labor completely but can complement crews to increase overall productivity.

“There are many factors that come into play when determining how a compact utility loader fits into the daily workflow,” Beddow says. “Some of these variables include the specific application, local average costs of manual labor and skill level of the operator(s).

“Anyone who has ever utilized a compact utility loader and its attachments to complete a job can speak to the increased efficiency when compared to manual labor,” Beddow adds. “Over the next five years, equipment manufacturers will be striving to deliver innovative solutions to the marketplace by providing equipment that will ultimately allow the contractor to do more with less.” 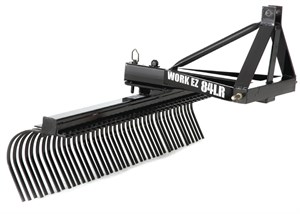 Most skid-steers will set you back $35,000 to $45,000, depending on how you get the machine equipped and how big of a machine you need. A larger one could cost $65,000. But looking at the range of attachments they have and the myriad things they can do, it is one solid investment.

Box rakes can let you prep the ground for laying down seed or sod. A landscape rake allows you to pick up roots and rocks so you don’t have to do it by hand. The aforementioned tree spade helps you avoid digging out roots by hand.

“There are just so many specific applications,” says Ward. “You can control the hydraulics from within the cab where you don’t have to get out of the cab to change out the attachments. You can go from pallet forks to tree spades quickly and easily. If people have a specific need, they can pretty much find the attachment for it. It’s amazing how far the technology has come.”

And it’s going to go even further. Five years down the road, Ward envisions telematics playing more of a role in machines on job sites or road and bridge applications, resulting in more precise grading.

“You’ll be able to grade down to an inch of what you want,” Ward says. “It just makes the job much quicker when you take away human error and plug in a grade or angle and the machine automatically does it. When you’re talking skid-steers, you’re not talking hundreds of thousands of dollars, so the sticker shock of some of those systems kind of prevents that. But, as we move forward, it will be something that will have benefits in the future.”

Dealing with the present day, most landscapers will buy a set of forks to go along with the bucket on their skid-steers as a start. The average landscaper has at minimum four to five attachments for their skid-steer (typically a four-in-one bucket where the bottom of the bucket comes out so it’s easier to spread out material evenly; a mulcher for going over bushes and branches; rakes for snagging roots, digging them out and clearing land; and a tree spade). But Ward has seen a trend of more landscapers looking at snow removal as a great way to supplement their businesses. Thus, snow blades, pushers and blowers have become popular attachments. 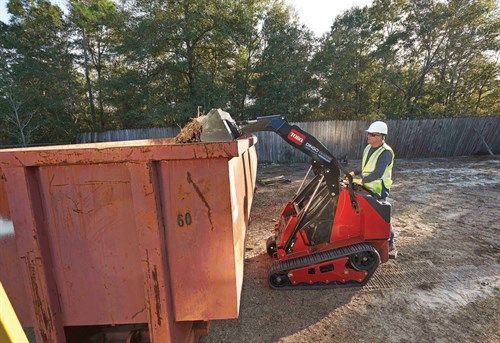 “As landscapers grow their businesses and expand what they’re doing, that’s when they start adding attachments on a case-by-case basis,” says Ward.

The more popular attachments include forks, four-in-one-buckets or side-dump buckets, and anything for snow removal.

“Our machine has always been more of a lift-and-carry application, so forks are popular because you can lift them higher and a little farther out,” Ward says. “Side-dump buckets are popular, especially for those who have to load trucks.”

Beddow believes that a compact utility loader or skid-steer loader is only as good as its attachments. It’s important for the contractor to consider the features of the base unit, but also the manufacturer’s breadth of attachments and their potential, capability and willingness to grow with their businesses.

“A few of the most popular attachments in landscaping applications are augers, trenchers, soil cultivators and bucket attachments, which allow the machine to serve as a material handler,” says Beddow.

A contractor’s investment will vary depending on their needs, and each landscape contractor will be looking to use the machine for different applications.

“Generally speaking, compact utility loaders can perform many of the same functions of their heavy-duty cousin, the skid-steer loader, at a fraction of the investment,” says Beddow. 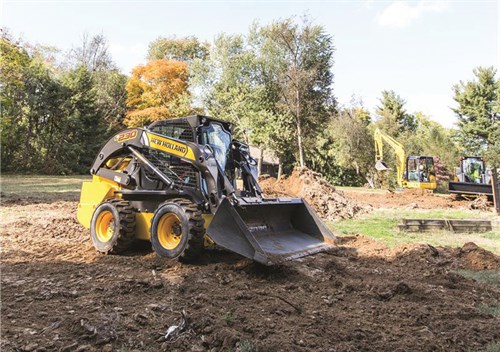 Choosing the right attachment depends solely on the application. That being said, the most popular attachments Toro sees as a manufacturer are those that significantly impact productivity out in the field.

“For instance, if a landscaper is planting a row of trees, an auger attachment is extremely useful,” Beddow says. “The auger can dig a perfect hole in a matter of seconds, as opposed to workers with shovels that may take several minutes. Another useful attachment on the jobsite is the grapple rake, which can grab, drag, lift and place brush, debris or large objects like boulders or timber. The Toro grapple rake can lift with up to 3,000 pounds of clamping force at the tine tips. Finally, a tried-and-true bucket attachment is ideal for hauling soil, sand, gravel or other landscaping materials on the jobsite and is one of the most common compact utility loader attachments out there.”

Non-traditional uses for attachments? How about angle brooms, which are typically used for street or sidewalk cleanup, but landscapers are using them more and more for snow removal to brush parking lots off.

“As snow removal gets more popular, you’re going to see a different set of applications for a broom,” says Ward.

Landscape rakes are great for picking up rocks and sticks, but they also prep the soil for seeding, allowing you to prep and pick up at the same time.

Ward says one of the most common mistakes he sees is landscape contractors not selecting the right attachments for the applications they’re doing. Or, they try to do something with one attachment, say a bucket, when a four-in-one bucket would be easier, but they just don’t see the need to spend the money and so they try to make do with what they have.

“Manufacturers are getting keen into promoting attachments now because a skid-steer isn’t just a bucket and forks anymore,” says Ward. “If you’re a serious manufacturer, you have to show what the skid-steer can do. You’re trying to entice landscape contractors to make it more reasonable to buy attachments.”

Ward advises contractors to demo the machine and find something that you’re comfortable with that has the right controls for you, whether that’s mechanical hand and foot controls, hydraulics, etc.

“You’re going to be in the machine all day – that’s your office. So for you to be productive, you need to be comfortable, so it must suit you and ergonomically not make you feel beat up at the end of the day.”

One bit of advice Beddow offers contractors when they’re shopping for skid-steers, compact utility loaders and their attachments is to carefully select a dealer.

“The relationship between the contractor and the equipment dealer is crucial to the success of a landscaping company,” he says. “A great equipment dealer will take the time to understand the needs of the contractor and be able to suggest solutions for any application. With the wide variety of compact utility loader attachments on the market today, an experienced and trusted dealer should have no trouble suggesting the right attachment for the job.”

Previous post 6 Steps to Set Employees Up for Success