Is It Time To Retire Your Zero-Turn Mower?

Keeping your mowers in tip-top shape also means running an efficient mowing business. Is there a point when mower maintenance outweighs the benefits of investing in a new machine? How do you make those big-purchase plans in your business? These www.expired-link.com members share their experiences on the life of a mower.

Another question: Do you guys replace motors or figure the mower is done once the engine goes? Does the mower typically out-last the engine (assuming regular maintenance, replacing parts as they break, spindles, bearings, etc.)? I am not opposed to doing things like changing an engine or replacing a deck, if the juice was worth the squeeze.

I know that this question has no definite answer, but I’m just looking for an average. I’m working on a five-year business plan, and need to know roughly when I will need to buy a new one. Would it be too much to expect 3,000 to 4,000 hours out of a commercial zero-turn, if I was not worried about resale value? Have any of you run yours that long? If so, did it have the original engine and deck? I’m guessing the hydraulic pumps will outlast everything else.

haybaler: I do a lot of maintenance and I’m a little optimistic, but I plan on getting at least 3,000 hours on my zero-turns. But I’m not planning on selling them; I just run them until they die and then keep any parts that are still good.

GreenN’Clean: It depends on how well you keep your equipment. If you take care of it, then it will last you a long time. But if you beat the heck out of it, then it won’t last as long.

fiveoboy01: Without considering resale or trade-in value, 3,000 hours would be doable with a good maintenance schedule. In my opinion, 4,000 hours is really pushing it, at least for an air-cooled gas engine. You’ll get more life out of a liquid-cooled gas or diesel engine. I’ve seen numerous mowers with a second engine on them and the mower itself (frame, deck, etc.) is still in pretty decent shape. Regarding pumps and wheel motors, I have no clue there.

Swampy: Ten years for diesel zero-turning radius mowers and front mounts. Starts becoming a reliability issue when it gets that old. Plus, you get somewhat of a trade in/bigger down payment toward a newer machine. We put on about 500 to 600 hours in one season.

New2TheGreenIndustry: I would plan on a mower running 2,000 hours minimum. How long it lasts after that depends on how well it’s been maintained.

PenningsLandscaping: Maintain the mower and put about 2,000 hours on it, then sell it and buy a new one if you don’t want to dump money into it. Two thousand hours is generally the number you’ll hit without any major repairs. One guy hit 7,000 on a Ferris when another guy’s Exmark only hit half of that. My cousin’s Ferris started having problems at 1,800 hours. You just don’t know.

corriepick: We put 1,000 to 1,200 hours a year our diesel Walkers. Generally, the engines never give us problems but everything else wears out. Blowers every 1,000 hours, hydro at 2,000 hours, etc. I usually flick them at 4,000 as that seems to be the point at which maintenance costs more than repayments on a replacement. I do have an old one at 6,000 hours but that had an operator that treated it like he owned it for most of its life. We’ve recently moved to leasing mowers; after the lease period, you just hand it back and get a new one. It’s well used by then anyway. There are some tax benefits to it, too.

Mow-Daddy.com: For a five-year plan, at about year three or four, I would look at buying a new one and keep the one you have as a backup mower. Or if you get help, you always need more mowers. Don’t just park it though; use it every couple of weeks for a day. It’s not good to just let them sit unused.

ashgrove landscaping: Between 1,500 and 2,000 hours and about three to four years. Downtime costs much more than a payment and the financing is interest free. Also, when you sell it, you get liquid cash to do what you want with – put it toward a new one for a smaller payment or pay off some interest-bearing debt, whatever you need. And you’re right back into warranty land. 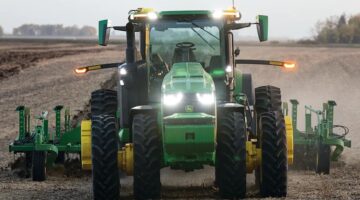