In most areas, the emerald ash borer (EAB) has a one-year life cycle. In cooler regions such as northern Michigan and Canada, two years may be required to complete a life cycle. Beetles begin to emerge in early summer and depending on the locale, emergence may continue through midsummer. Adults are roughly a half-inch in length and have elongated metallic green wings. They mate during the day, especially when conditions are warm and sunny. Unlike many insect pests, EAB feed in both the larval and adult stages, although they cause little damage as adults.

A few days after the initial mating, females insert eggs into bark crevices on tree trunks and branches. This can be repeated many times for each beetle, for a total of 60 to 90 eggs. Eggs hatch after seven to 10 days, and the tiny borers chew through the bark and move into the cambium. For several weeks, larvae feed on phloem tissue in an S-shaped feeding pattern. As they feed, a flattened tunnel or gallery is formed, which becomes packed with a finely powdered material called “frass.”

Feeding continues until late fall, when larvae transform into the resting or pre-pupal stage for the winter months. They spend the winter in outer sapwood or bark, depending on the bark thickness, age of the tree and the ash species being fed upon. In early spring, they change into pupae within pupal chambers. After approximately two weeks, adults emerge through 1/8-inch-diameter, D-shaped exit holes in the bark, and the life cycle starts over.

Because EAB larvae tunnel inside the tree, hidden from view, it is often very difficult to detect their injury. This is especially true for newly infested trees. One sign of EAB infestation is the presence of jagged or irregular holes in the bark, the work of woodpeckers seeking food. After a year of infestation, the D-shaped exit holes will be present on various trunk and lower limb bark surfaces. Because of disruption in the cambium layer, the bark may split vertically above larval feeding galleries. Removing this bark will reveal the characteristic S-shaped galleries filled with frass. It is common for the sapwood to be discolored as a result of secondary infection from fungal pathogens in these locations.

Compared to leaf-feeding insects such as leaf beetles or fall webworms, the damage caused by EAB is much more serious. Not that leaf feeding is trivial, but borers feed on the conductive vessels of the tree. The phloem and xylem are essential for the transport of water and nutrients throughout the tree. When EAB larvae disrupt this system, the foliage wilts and the tree canopy becomes increasingly thin as branches begin to die.

While leaf feeders cause lots of short term and unsightly damage to which many clients seem to overreact, borers cause extensive, unseen and long-term damage, which to customers, often looks like there is no problem.

Some observers have suggested that drought, compaction or various root system stressors contribute to the vulnerability and rapid decline of EAB-infested ash trees. While this is likely true, other arborists and landscape managers have noted that seemingly healthy ash trees (all species of ash are susceptible to EAB infestation and injury) have become infested at the same rate as stressed ones. These observations speak to the tenacity of this pest.

Control of EAB is not an easy matter. However, by increasing species diversity in the landscape and the judicious use of insecticides, an acceptable level of EAB control can often be achieved.

Every landscape contains a variety of trees. On some properties, the level of diversity is poor, consisting of only a few different species. Ideally, species diversity in a landscape should include many different species of both conifer and broadleaf trees. A healthy target to shoot for is to have no more than 10 percent of all trees in a landscape made up of the same species. Considering the aggressiveness of EAB, it is probably wise to consider alternatives to ash when planting. Kentucky coffeetree, golden raintree, yellow buckeye, crabapple, honeylocust, Dutch elm disease-resistant elm cultivars, Japanese scholartree, tuliptree, hickory, yellowwood, beech, ginkgo, Carolina silverbell, sourwood, amur corktree, black locust, zelkova and hornbeam are all species with a somewhat similar habit and shape to ash.

John C. Fech is a horticulturist, certified arborist and frequent contributor located in Omaha, Neb. Frederick P. Baxendale is a professor and extension entomologist with the University of Nebraska-Lincoln. 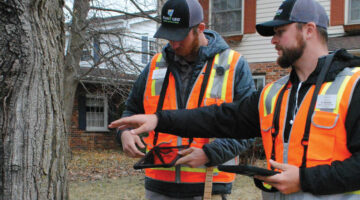