Soil aeration is one maintenance practice that can truly improve turf health.

This is the time of the year when baseball players head south for spring training, knowing full well that it takes preparation to ensure a successful season. The same is true with turfgrass: early-season prep work will make a big difference in the challenging months to come. Much of that work is targeted not at the grass itself, which may still be dormant, but at the soil below.

“There’s no doubt that people can get so excited about seeing grass grow in the spring that they forget about the importance of the soil,” says Mike Goatley, Ph.D., extension turfgrass specialist at Virginia Tech. “We’re constantly preaching the importance of soil testing, and soil tests can be taken at any time of year. If a lawn hasn’t had a soil test in three or four years, there would be no money better spent than to do a soil test before you enter the growing season so that you’re not applying nutrients that are unnecessary.” That approach can help save money, protect the environment and give the plant what it needs, he explains.

The excitement of spring, and the anticipation of the scent of freshly mowed grass, can be a pretty powerful force. That can sometimes impact cultural practices that have consequences for soil and turf health. “I think many times there’s so much excitement about returning to managed turf, that people tend to overdo it with spring nitrogen. And, that’s the case with both warm and cool-season grasses,” says Goatley. In addition to possibly applying too much nitrogen in the spring, another common mistake is putting down fertilizer too early in the season. “You need to have temperatures stabilized and moderated, you truly have to have entered a growing window in order to benefit from spring nitrogen fertilization,” he adds. 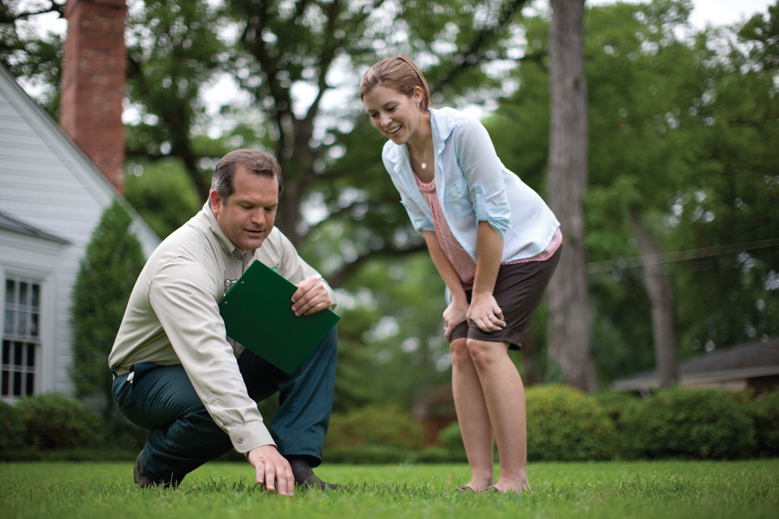 Performing aeration, fertilization and other cultural practices early in the season can improve soil health and lead to improved turfgrass throughout the long growing season ahead. Photo: Trugreen

Particularly with cool-season grasses, “a little nitrogen goes a long way,” Goatley points out. “We usually tell people that fall is the best time to emphasize fertilization of those grasses with nitrogen, and no more than 1 pound of nitrogen per thousand square feet in the spring is all that those cool-season grasses need. When warm-season grasses get going, I like to see the grasses 75 percent to fully green before initiating spring nitrogen applications, because there’s always a risk of a late frost.”

While caution needs to be used in the amount and timing of spring fertilization, there is value in putting nutrients into the soil at that time of year, says Goatley. “The problem is that shoot systems get first dibs over roots at that time of the year, so the value comes from using the appropriate rates, so you ease the grasses into the spring growing season by balancing shoot growth and root growth.” 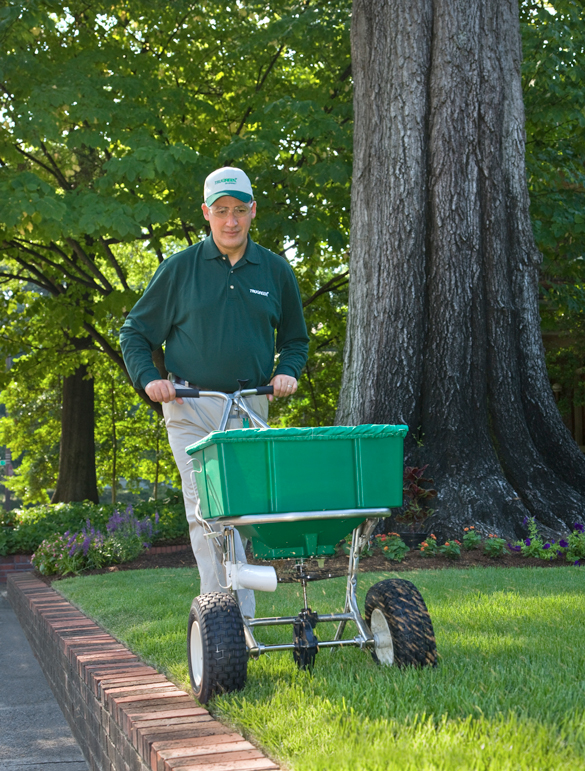 Properly calibrating spring fertilization is critical. “I think many times there’s so much exciting about returning to managed turf, that people tend to over-do it with spring nitrogen. And that’s the case with both warm- and cool-season grasses,” says Mike Goatley, Ph.D., extension turfgrass specialist at Virginia Tech. Photo: Trugreen

Too often, testing is put off until a turfgrass problem is observed, and many times that problem can be traced back to soil health, says Goatley. The health of grasses persisting in the summer will depend on the root systems they’ve been able to establish, he emphasizes. One final note on the topic of soil tests: many labs can be busy in the spring conducting agricultural soil tests for farms, so be sure to plan ahead and allow enough time when sending samples in. “Early spring is the ideal time to make pH adjustments, which will take weeks or months to take effect,” he explains. “Making applications early, before the grass becomes active, would be better because the chemistry is taking place in the soil during that time, so the plant will benefit from that application when it becomes active.”

Struyk Turf, which covers southwest Iowa and southeast Nebraska, services a number of athletic fields, in addition to its work on residential and commercial lawns. For these high-use areas, there’s an even greater need to prepare the soil for a healthy growing season, says Garry Struyk. The company follows a set program of aeration, overseeding, deep tining, more seeding, more aerating and a final deep tining. “We also fertilize them and apply lime and gypsum,” Struyk explains. This turf program typically takes place in late November, after the football season ends. This gets the soil ready for the following spring, he points out. They don’t deep-tine residential lawns, but the aeration/overseed/fertilize approach is otherwise pretty similar. “We try to tell people to only seed in the spring if it’s absolutely necessary, because otherwise you leave yourself wide open for crabgrass problems,” he states. 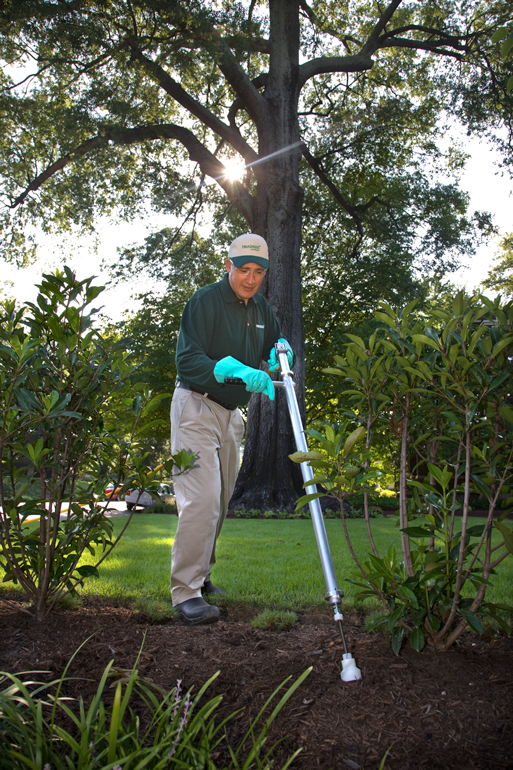 While performing early season turf maintenance, don’t forget other aspects of the landscape that might also need attention after the winter. Applying new mulch and any necessary soil amendments will keep trees, shrubs and other landscape plantings healthy during the growing season ahead. Photo: Trugreen

For existing customers, the goal is to get this work done in the fall, which gets the soil and lawn in good shape for the following growing season. “We aerated nearly 800 lawns in the fall, and we’ll probably do another 300 or so in early spring,” he states, adding that aerating really improves soil health. “We use Ryan aerators; we like them a lot, some of them I’ve had over 20 years and we keep rebuilding them.”

In early spring, Struyk Turf applies fertilizer with a preemergent on clients’ lawns. “We start that as soon as we can, hopefully between the first and 15th of March, depending on the weather,” Struyk explains. “We sometimes follow up around the middle of April to the first of May, because we have to put our Pendimethalin down in a split application.” Struyk uses a 17-0-5 fertilizer at 4 pounds per thousand square feet. The split application also provides benefits when it comes to fertilization, he adds: “That gives us about three-quarters of a pound of nitrogen both times. Then we don’t have to worry about fungus problems, because we’re not overdosing it.” Lime and gypsum are applied on lawns when needed, and only at the time of aeration.

TruGreen, which provides custom lawn care and landscape services through more than 200 branches throughout the U.S. and Canada, has developed comprehensive agronomic programs for each area of the country. In the spring TruGreen teams are often working on lawns they serviced the previous fall, so they’ve got a head start and know exactly what the lawn needs. “When we’re back on those lawns, we make sure that the products we use, whether it’s a liquid form or a granular form, are chosen to match the lawn’s requirements,” explains Ben Hamza, Ph.D., director of technical operations at TruGreen. 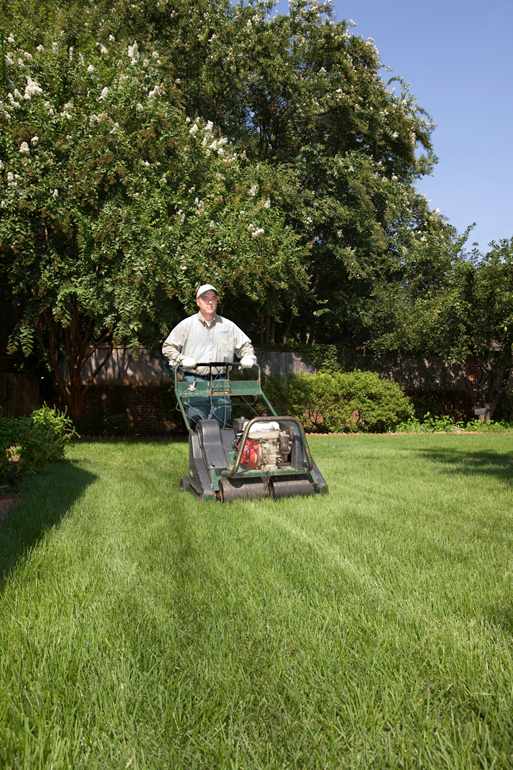 For new accounts, TruGreen begins by evaluating the health of the lawn. “If the lawn doesn’t look like it’s in good health, if the color or density is weak or it’s infested with weeds, we time the application to ensure that the turf is thickened up and the weeds present are targeted,” says Hamza. In areas of the country where annual grasses, such as crabgrass, are a concern, preemergent herbicides are also applied. If the lawn doesn’t respond to these treatments, or the soil appears sandy or otherwise deficient in nutrients, TruGreen will send soil samples to an accredited lab. “When the results come back, we have regional technical managers in the field who are agronomists. They look at the results and make recommendations based on whether it’s pH adjustment that’s needed or whether certain nutrients are lacking,” he explains.

One common mistake made in early season turf and soil treatments is starting too early, says Hamza. “Sometimes the snow melts and the lawn still looks brown. There’s a temptation to get out there and start fertilizing, but you want to be sure that the soil is not saturated,” he cautions. “And, you want to make sure the soil isn’t frozen.”

Once the grass does begin to grow, “on the first mowing of the year, you want to reduce the mowing height by a little bit to remove any dead grass or debris or leaves that have become matted under the snow during the winter,” advises Hamza. If your standard cut for bluegrass is 3.5 inches, for example, mow at 2.5 to 3 inches only for that first cut, he explains. “Removing that debris allows sun to penetrate the turf and warm up the soil, so the turf can recover from the winter and start regrowing.” Even raking will allow the sun to heat the soil and move turf growth along.

There are other cultural practices that can benefit the soil in the spring, Hamza points out: “If a lawn has a lot of thatch, we may go ahead with a core aeration to help alleviate the thatch, reduce compaction, encourage root growth and improve the soil biology. Soil microbes benefit from aeration.”

Mike Goatley with the Virginia Tech Extension agrees that spring aeration can be a helpful practice, but cautions not to wait too long for summer stresses, especially with cool-season grasses. The combination of aerating, heat and other stresses can overtax the plant in the summer. “We actually have greater root growth in the spring, so you can get greater benefit from spring cultivation and spring fertilization, within reason and appropriate amounts,” he explains. “Especially in the spring, a little bit goes a long way.”