If you walk through a retail store in October, you’ll see lots of decorations for sale. Not just witches and pumpkins, but also trees and bells. Retailers, it seems, are intent on pushing the start of the holiday season earlier and earlier. For landscape companies that offer holiday lighting services, the season has to start even sooner.

“Most people want them up by Thanksgiving, so they can turn them on the following day, so you have to start early enough to make that happen,” says Aaron Wiltshire, president of Oklahoma Landscape in Tulsa, a 32-year-old company that added holiday lighting services in 2010. That means that sales and marketing begin during the summer, with orders for lighting materials placed shortly thereafter. And the installation work itself takes weeks and weeks to get all customers serviced.

“Christmas really starts early for us,” agrees Alan Marchant, co-owner of A & K Landscaping in Eugene, Oregon, which has been handling holiday lighting for a little over a decade. And, really, that’s part of the reason it works for many landscape companies. A & K Landscaping got into the holiday lighting business a little over a decade ago as a way of keeping its crews working during an otherwise slow time of the year.

The same was true for Oklahoma Landscape, says Wiltshire, who says that his main objective was to keep employees on longer during the slow season. (“And, of course, to make a profit,” he adds.) Wiltshire found that it made sense to repurpose irrigation crews after their season had ended and put them onto holiday lighting.

“We just put together some black and white flyers and passed them around to see what would happen. It didn’t really do well the first year — I think we had two customers that first year,” says Marchant with a laugh. While there’s some wisdom to getting into new services slowly, that was a little too slow. He says a large part of the problem was that they hadn’t chosen the right neighborhood to market this particular service.

A & K Landscaping had only been in business for a couple of years at that point, and while Marchant says they targeted a somewhat higher-end neighborhood, it wasn’t upscale enough to produce demand for holiday lighting services. So, the next year, “we switched up the neighborhood and dressed up our flyer with color, and from there we changed to a color door hanger,” he explains. “Once we got the right neighborhood, then it started to get some traction. It probably varies in every city, but once you get to the right home value, then people start paying for services like this.” 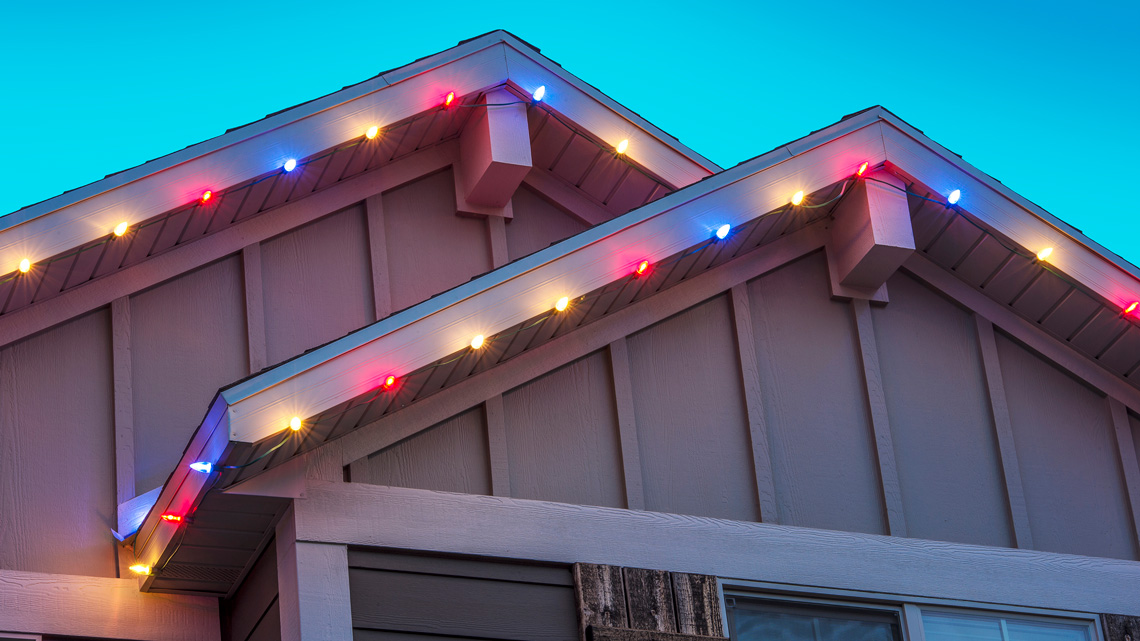 Now A & K Landscaping doesn’t advertise its holiday lighting services at all. “It’s just word of mouth; people just see our work next door, and then we end up doing the neighbors,” Marchant states.

Oklahoma Landscape got into holiday lighting by working with a local product distributor. “We signed up with them and went to one of their seminars and did some training and were able to network with other companies already in the installation business to learn a little bit about pricing,” says Wiltshire. He says that many installation companies work exclusively through distribution networks as far as purchasing the lighting materials, and that’s what Oklahoma Landscape did for its first two years offering the service. Other installation companies have signed up with holiday lighting franchises, notes Wiltshire.

But after a couple of years, he chose a different approach for Oklahoma Landscape. “We ended up choosing a lease-for-lights system,” he explains. “So all of our customers lease their lights from us.”

Wiltshire says he found that the profit margins for his company are much better when buying the lights and then leasing them to property owners rather than selling them outright. “And most people like the idea of a lease because if they move from that property, they’re not stuck with lights that are custom-cut to fit a specific home. We also guarantee the lights to function as long as they have the lease and they’re using us to hang their lights,” he points out.