Follow these technique tips to make sure the landscape you're grading not only looks good but also functions properly.

Anyone who has ever sat behind the controls of a dozer or skid-steer will tell you there’s an art to landscape grading. Trying to make things look natural, even when nature has put the high and low spots in the wrong places, takes real talent. But grading is also a science, and there are some basic techniques that need to be followed to ensure the landscape not only looks good but also functions properly.

“The grading is really the basis of any landscape design, for the plantings and everything else,” says Bruce Sharky, professor of landscape architecture at Louisiana State University. “What you want to do is have a sensitive grading plan that considers not only directing water but also complementing the building and enhancing views or increasing interest. There are both aesthetic and functional considerations.” 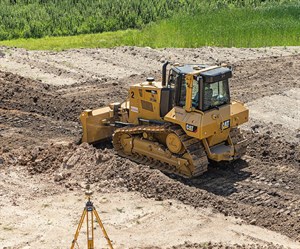 Sharky is author of “Landscape Site Grading Principles,” a comprehensive, visually oriented guidebook published by Wiley and available online through Amazon and other booksellers. Sharky says the book is designed to simplify the concepts involved in grading, both from a design standpoint and out in the field: “You don’t need to know sine and cosine in order to do the work. This book is written for people who just want to know how to grade.” Really, the only math formula that’s needed is A=B/C, “and with that you can solve any problem,” he says.

There are some very basic principles to follow: On softscape areas, like turf, “you want to, where possible, have 2 percent or greater surface drainage away from buildings,” explains Sharky. And that rule applies not just around structures; the same positive draining techniques should be used anywhere you don’t want rainwater to go, like swimming pools or paved areas, he adds.

Of course, when grading hardscape areas, it’s important that sufficient fill be excavated to allow for the proper amount of compacted backfill to be added to the area; this may differ depending on climate and local soils, the type of hardscape feature (driveway versus patio versus retaining wall, for example), and specific hardscape manufacturer guidelines. Regardless of these variables, Sharky says the grading plan for finished hardscaped areas should focus on achieving a minimum of 1 percent slope away from these features. “And you want to direct the water so that it eventually goes into the softscape,” he states.

The general approach to water management in grading has changed over the years, Sharky points out. At one time, the primary goal was to move water as quickly and directly as possible into a storm system. “Today, we’re concerned about conserving water, and we don’t want runoff with pesticides and chemicals ending up in streams. So … as much as possible … we try to slow the water down and keep it on-site in a bioswale or rain garden where it can percolate,” he explains.

The tools and technology needed to grade properly can vary. Sharky says the best starting point is a good topographic survey of the site, “so you know how the ground is shaped and you can see where the water is going in existing situations. Don’t try to do it by eyeballing it out on the site,” he cautions. In some cases the designer/builder is provided with such a survey, but in other cases contractors have to take their own measurements. 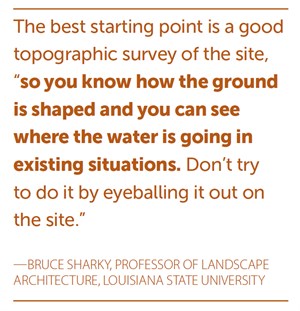 Jason McAllister, owner of McAllister Landscaping and Grading in Charlotte, North Carolina, does a lot of grading work in newly constructed housing developments and in city parks projects. “Sometimes on larger jobs they’ll have a grading plan, but most of the time we’re using our transit,” he says. McAllister uses an “old school” transit; he’s considered adding a higher-tech laser transit, which he says are great for grading pads, but in other situations require a lot of up-and-down adjustments.

Bob Pfeil, owner of Bob’s Grading, a full-service landscape contractor in Milwaukee, Wisconsin, says he typically gets a survey and grading plan to work from. “On some lots, it may be a guideline, and in others you need to follow it per regulations,” he explains. Pfeil and his crew use a Topcon self-leveling laser to check grades on the mainly residential projects they handle. “Some of the lasers now, you can actually put a slope into them or slope-match across two different points on the property,” he states. On larger commercial jobs, Pfeil says it’s more common to see GPS technology being used to grade sites with millimeter accuracy. “That can be coupled to the equipment, where you actually have grade control, which means it’s operating on its own. That’s more than most landscapers would need.”

Pfeil says that on larger rough-grading jobs, a crawler is usually used. But he’s also recently begun using a large compact track loader, which he says is more maneuverable in tight areas and has proven to be very useful. “It really allows us to get into sites when the conditions are wet. That machine has allowed us to keep our bulldozer back at the shop many days.” When it comes to finish-grading, his go-to equipment is a Harley Rake hitched to a compact tractor, he adds. The primary advantage over a skid-steer (more commonly used in the industry) is increased visibility, says Pfeil: “When we’re doing precision, finish-grading and preparing the soil, we have 360-degree visibility.”

When it comes to grading terrain that will become a driveway or some other sort of hardscape, he will typically use either the dozer, the track loader or a tractor equipped with a box blade. “That’s a tool that’s probably used less nowadays because of some of the mechanization with Harley Rakes, but it’s still hard to beat a box scraper when it comes to leveling out gravel,” states Pfeil. 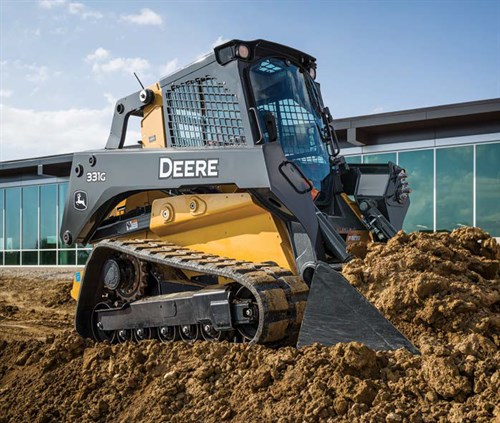 While every job is different, there are some basic tips that can help out in specific grading situations. For example, when grading around buildings: “One common mistake I see is people grading too high,” says Pfeil. “You’re really supposed to leave 6 to 8 inches below the siding. In the real world, it’s seldom that, but in some cases people are pushing the dirt right up to that siding line.” 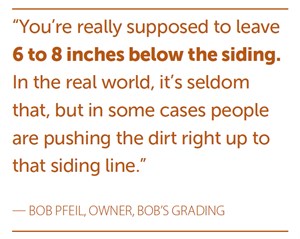 Somewhat along the same lines, he frequently sees attempts to solve drainage problems by just adding dirt around the house; trying to introduce slope in this way also results in dirt being too high on the building. “What really needs to be done,” emphasizes Pfeil, “is to establish the correct elevation of the house and then pitch away accordingly, even if it means tearing out existing bushes and regrading properly.”

When grading areas that will eventually be turfed, as a final step McAllister likes to rough up the surface: “On any type of lawn area, we try to get it to grade and then tear it back up again. A lot of times, it can get pretty slick from a skid loader. The level is good, and you have the correct drainage, but you need to prepare a good seedbed.” He likes to get down more than the couple of inches deep than a Harley Rake or other similar equipment can do. “We like to really get it loose – almost like we’re ploughing a garden,” McAllister explains. Loosening the soil is important whether the lawn will be seeded or sodded, he notes.

One other tricky grading situation can occur when trees are present on the site. “As a rule of thumb, a contractor should do whatever they can to make sure that they or their subcontractors do not do any grading, filling or cutting within the dripline of a tree that you want to keep,” says Sharky. Keeping equipment and fill away from the tree, he says, is the best way to ensure the tree survives through the project. It’s another example of how proper grading can achieve both functional and aesthetic results.