For Stephen Carr Property Services, the spring cleanup work involves a lot of raking and blowing, dethatching the lawn and removing burlap that was protecting small trees and shrubs. “There’s a lot of picking things up and tidying things up,” says Carr.

Carr began offering a spring cleanup service in the very early days of his company’s operation, after discovering that it was usually necessary to do some cleanup work to a yard before the first mowing of the season. So, Carr decided the add-on service might as well be something the company can charge for in addition to the lawn mowing package. 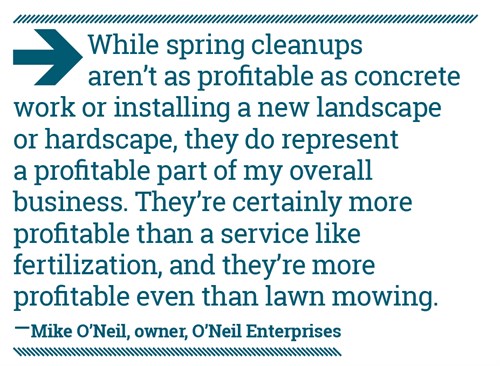 “We charge a set price for mowing, and then we quote them a separate price for spring [and fall] cleanups,” he explains.

O’Neil Enterprises, a full-service lawn and landscape firm in Clifton Park, New York, also offers spring cleanups as a standalone service. “Spring cleanups are something we’ve always done — we try to be a one-stop shop for everything,” says owner Mike O’Neil. “Some companies include spring cleanup as part of a package, but I never do. For us, every service is separate — lawn care is one thing, fertilization is another, etc. We don’t package anything.” This approach helps him to avoid having to offer discounts, and he’s found it more profitable.

It also makes sense to treat it as a standalone service because O’Neil Enterprises is made up of different divisions with dedicated crews providing different services. The company has its landscaping crew, rather than its lawn mowing crew, handle spring cleanup work, which again makes sense because the cleanup includes not only debris removal, but also landscape-related work like plant trimmings and bed treatments (including mulch and edging).

“It’s the same type of work as landscaping, just from a maintenance aspect rather than an install aspect,” says O’Neil. That crew usually focuses on spring cleanups during all of April and the first week of May. “Then, the rest of May through June we’re doing a combination of cleanups and new landscape [installation] work,” he adds.

Even in June the cleanups are a priority because it needs to be done to get the mowing crews out on properties and get the landscaping crew ready to switch gears to focus solely on more profitable landscape/hardscape jobs. O’Neil says that nearly every customer for which the company provides weekly lawn care does sign on for spring cleanup.

When he first started offering spring cleanups, Carr used somewhat standardized pricing for the service, but he says he’s found that in order to make sure the work is profitable, each property needs to be carefully evaluated before quoting clients a price.

“It depends on things like how many leaves there are, whether there are acorns everywhere, how much winter debris there is on the lawn. So, our cleanups vary in price,” he states. “If I get a call and they say, ‘Hi, Stephen, I have a house on XYZ Avenue and I need a price for a spring cleanup,’ I can’t sit at my desk and throw some numbers at them or work on averages. I need to go to the property and walk around to see what’s involved before I can give someone an accurate price.” 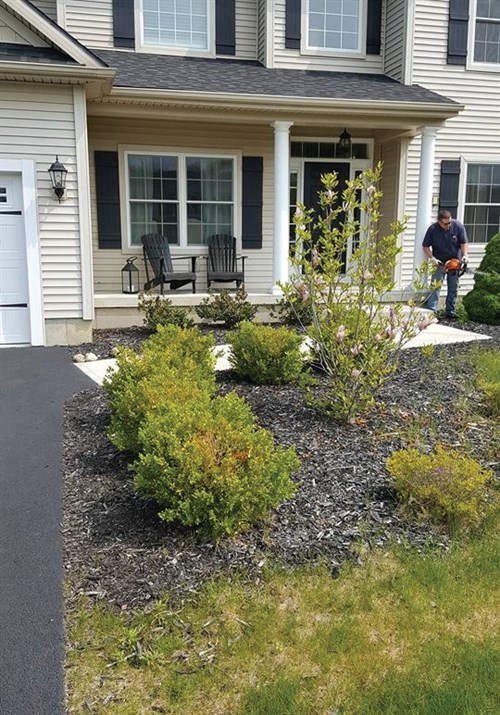 O’Neil agrees that an on-site inspection is necessary before pricing a spring cleanup job. “To be honest, the client who calls and is looking for a price over the phone, that’s not who we’re looking for,” he explains.

O’Neil says that while spring cleanups aren’t as profitable as concrete work or installing a new landscape or hardscape, they do represent a profitable part of his overall business. They’re certainly more profitable than a service like fertilization, and they’re more profitable even than lawn mowing, he says. “And mulch is the most profitable part of cleanup work,” he adds. Because mulch is included in O’Neil Enterprises’ spring cleanups, one important part of his work when quoting is to measure beds to determine how much mulch is needed. The company buys mulch in bulk and charges customers $100 per yard installed. It also is able to purchase plants from a nursery at a 20 percent discount, so if a customer wants any new plants installed as part of the spring cleanup, there’s a profit for the company on those.

Stephen Carr Property Services also has found spring cleanup services to be financially beneficial. “I would say it’s a profitable part of our business,” says Carr. It’s a service that’s become an important part of his company’s overall bottom line.

O’Neil says fall is the best time to sell spring cleanup services. “Whenever we do a fall cleanup — say a new client calls us and says they want leaves picked up — we always present them with their options for spring cleanup and a rough scale of price because there will be market changes in things like mulch,” he explains.

Since he’s already there in person because of other work, O’Neil has found that meeting in person makes a huge difference when it comes to closing sales.

Carr estimates that only about 10 percent of his spring cleanup work is done for clients who he doesn’t already provide lawn care services for.

“We usually only do that if they are neighbors of clients or we provide snowplowing services for them or we have some other connection to them,” he notes. “Otherwise, we need to take care of our regular customers first and then we can take care of additional people if we have the time.”

Carr says that doing a good job on a spring cleanup can be a way to make a good first impression and get your foot in the door with a new customer, who might later request some other lawn or landscape service. “Any service you do, if you provide a good service, you’re going to have an opportunity to do more business with that customer,” he says.

Carr points out that spring cleanup work is very labor-intensive. Aside from running a dethatcher [his company uses a Walker mower with a JRCO dethatcher on the front], most of the work has to be done by hand and there aren’t many shortcuts.

Rakes are a go-to tool for spring cleanups, and even the other equipment that’s used that is powered — blowers and power brooms — is still handheld. So there’s not much about the work that can be automated, and this needs to be factored into the price, as well. “There are a lot of man-hours involved in both spring and fall cleanups,” he states. “Good things take time, and you need to make sure you take the time to do a good job.”

Labor is a challenge for many companies in this industry. “I think pretty much everyone will say that, at least in this area,” says Carr. Because spring cleanup work is often the first work done to kick off the lawn and landscape season, it’s especially important to line up employees well in advance to be able to work early in the season.

“And you need to have time to train new employees,” Carr adds. That’s especially important because spring cleanups all have to happen in a relatively short window of time.

And there are environmental challenges to spring cleanup work, Carr notes. “We have late snowstorms, so that can be an issue, and then that snow melts, so there’s a lot of moisture in the ground — everything is wet. So, you have to let things firm up a little bit before you go out there, especially with equipment.”

In Maine, the work usually begins at the end of March and runs through April. “By May, you’d better be mowing lawns,” he says. “We can still do some cleanups in May, but we try to have 95 percent of them done by then.”

Stephen Carr Property Services doesn’t include mulch as part of its spring cleanup services, so it also needs time to begin putting down mulch for customers in May. Spring, after all, only lasts so long. 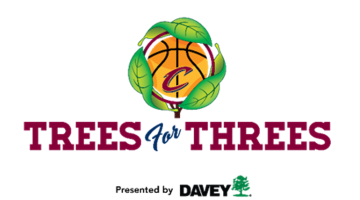