Tapping into the market for water features.

Andy Vande Hey says he never had a grand plan to build water features. “Our evolution into water features was really customer-driven,” says the president of Vande Hey Company Inc., a full-service landscape design/build firm in Wisconsin. It started many years back with clients stating that they want a more relaxing outdoor living space or maybe some calming sounds at the end of stressful days, he says, “so we began designing them into our projects, and suggesting them. And it’s kind of evolved into doing more and more over the years.” 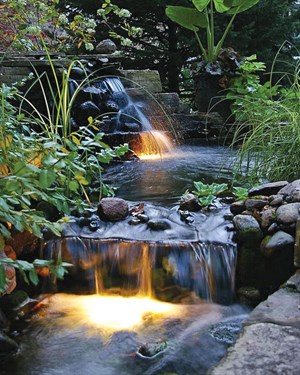 Water features were driven by customer interest, according to Andy Vande Hey.

Northey says the equipment needed to construct water features is the same as would be needed to build any other landscape or hardscape feature. “But there is some specialized training that’s necessary,” he adds. Northey says he spent “quite a bit of time” at the headquarters of Aquascape, a supplier based in Illinois, to learn some of the intricacies of water construction, as well as the various products needed. “We’ve done a lot of training with them, including at a big event they have every August called Pondemonium.”

“There are a ton of resources out there,” says Vande Hey noting that, in addition to information online, product manufacturers regularly offer classes in the construction of water features. There are also kits available, he adds. His company uses kits for some projects and also does custom installations. “It depends on the budget and the look that we’re after,” says Vande Hey.

There is some technical expertise required. Vande Hey cites one complex water feature installation his company completed for an assisted living facility. The product distributor was uncertain about some of the calculations, so he contacted the pump manufacturer directly and was able to get his questions answered. “So there’s a little bit of learning as you go,” he says, advising anyone interested in getting into water feature design and construction to start with simpler projects.

For both Vande Hey and Northey, water features have been a good fit for their existing landscape businesses. When building water features, “you use the same kind of equipment — mini-excavators, skid-steers — and the same kind of stone as you would in other hardscape installations, you just need to understand the mechanics of the pumps and the plumbing,” says Vande Hey. “And you need to make sure you’re careful with the liners in order to prevent future headaches with leaks.”

Building water features is somewhat technical, but it’s also an art form, says Vande Hey. “You need crews with a discerning eye that are careful. You can’t just pound it out — that’s when you’ll get a tear in your liner, or you’ll stretch it or jagged rocks will get on it. There are just some things you need to watch out for when you’re dealing with water.” For that reason, he says, it takes a certain type of employee to really bring them to life. “We have a couple of crews that just do a better job of interpreting the plans and, to a degree, looking at the space and designing the features on-site,” Vande Hey explains. These are general hardscape crews; they’re not dedicated just to building water features, but are utilized on hardscape installation projects that include a water feature. 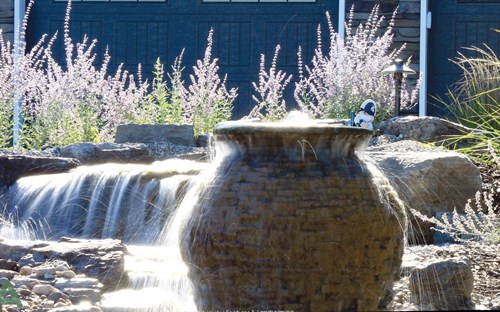 Building water features that include other landscaping work usually goes hand in hand for R&A Water Features and Landscaping.

Vande Hey Co. has built water features ranging all the way from about $1,500 to roughly $200,000. “When you get into those larger ones, there’s typically a lot of hardscaping and walls — it’s not just a pump and a liner,” Vande Hey explains. Because those types of water features tend to incorporate many different aspects of hardscaping, they are perfect for experienced hardscape crews, he notes.

Northey says that water features have proven to be a good tie-in with his company’s landscape work. “Most of the times we install a water feature, it needs landscaping on top of it, so it’s another opportunity,” he states. 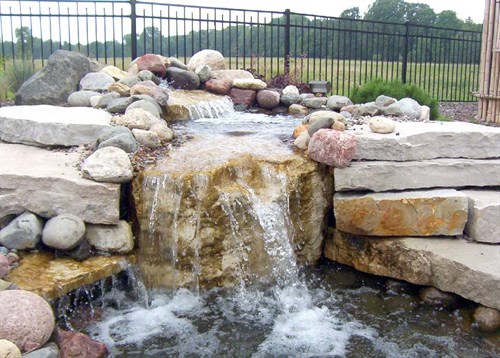 R&A Water Features and Landscaping offers pondless waterfalls starting a little under $4,000 and going up from there — all the way to $100,000 to $200,000. “It’s just like a home. It depends on how much the customer wants to spend, and how big and elaborate they want to get,” says Northey. 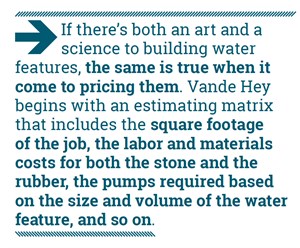 Something else that adds to the challenge of selling water features is the number of installations out there that have been done poorly, says Northey. Water features that either look bad or don’t perform properly can sour people on them. When installers skimp on the products they use, such as installing inferior filtration, the water feature won’t do what it should do.

Fittingly, when it comes to demand for water features, there seem to be ebbs and flows, says Vande Hey. “There are years that we’re doing $500,000 in water features, and there are years when it’s $50,000,” he explains. Because water features are only one of the many services his company provides, the overall income for the year tends to balance out either way, he says.

Overall, he has noticed a bit of a drop-off in demand for water features. “They were probably at their peak about 10 years ago — everyone wanted them and was asking about them. Now, water features have died down a bit. We still do a good chunk of them, but it’s less volume than what it was 10 years ago,” he says.

Still, they are often featured on landscape improvement shows on television, so more people have at least seen them. That publicity helps from a sales standpoint, “but that’s not always the best education because every location is different. You build a water feature differently here in Wisconsin than you do down South, for example.” While the pumps and products are similar, the structure of the water feature is different when you need to deal with frost, etc. “So there’s some educating of customers needed, because they watch HGTV and that sometimes can be misleading.”

When talking with clients about what kinds of things they are looking for in their landscapes, if they mention that they want it to be relaxing, “we say, ‘Well, have you thought about water?'” says Vande Hey. He says that some homeowners immediately think about ponds and all the maintenance involved, so the sales process often requires some time to explain the concept of pondless water features.

If there’s both an art and a science to building water features, the same is true when it comes to pricing them. Vande Hey begins with an estimating matrix that includes the square footage of the job, the labor and materials costs for both the stone and the rubber, the pumps required based on the size and volume of the water feature, and so on. “Once we have it estimated, we actually sit down and look at it — I try to review every number that goes out — just to talk about it,” he explains. “There’s always that gray area, and it’s that gray area that can really bite you in the tail.” 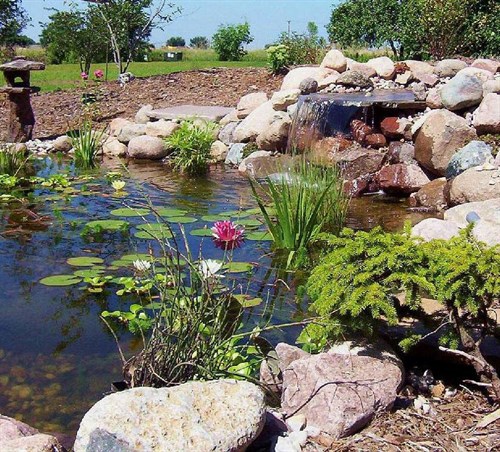 Many customers need to be educated on the type of water feature that will work in their region, regardless of what they may have seen on TV.

For example, he analyzes the labor aspect: “Can we build this in a day? Can we build it in two days? Or is it a one-week project?” And he considers the access that’s available to the site, something that can be a particular concern when building water features that might feature large rocks or involve sloping terrain. “Access is huge. We can do the same work on one site, and on another site, if the access is terrible, the same plan can take us three times as long,” says Vande Hey. “We walk through every step of it to make sure that we’re covered from a budget standpoint. We do have a pretty complex estimating system, which works great, but you still need that human element of experience.”

For someone just getting into water features, “you just need to be careful and cover your hours and realize that to build a wall for a water feature might take you twice as long as building a normal natural stone wall,” advises Vande Hey. Between being careful with the liner and shimming every stone so that it’s just right, it’s just a slower process, he states.

Internally, at Vande Hey Co., a particular service only becomes its own “profit center” when it regularly reaches a certain dollar threshold. Pools, for example, are a separate profit center; water features don’t warrant that designation and fall under the general design/build profit center, along with things like landscape lighting. Which is not to say they’re not profitable, Vande Hey stresses. “Water features are profitable. They are labor-intensive, but there’s also a fair amount of materials. When we look at balancing what we do, for us at least, we like to have that balance because anytime you have labor and materials, it’s more profitable.”

Again, that’s if the project is priced correctly. “If not estimated properly, water features are something that can get away from you,” he cautions. “So you have to be careful.”

Vande Hey Company, through its maintenance division, also offers water feature maintenance. “We start them up in the spring, we shut them down in the fall, we clean, we trouble-shoot issues,” says Andy Vande Hey. While water feature maintenance is also profitable, he adds the caveat that, “It’s not like holiday lighting that fits a slower time of the year — the start-ups happen in the spring when you’re going on all cylinders, so it doesn’t fill in the peaks and valleys, but it’s a nice addition.”

R&A Water Features and Landscaping offers water feature maintenance packages, but Andy Northey says that many customers prefer to handle the simple tasks themselves — it’s part of the enjoyment they get out of the water feature. “The one thing we specifically shoot for is doing the spring clean-out,” he says. Mid-season and fall maintenance services are also offered. “We also get a lot of repair work, and people who move into a house that has a water feature and they don’t know what to do with it.”