“It is quickly becoming my specialty,” says Jim Kerns of Typhula blight, or gray snow mold. That’s because there are generally long periods of snow cover in the northern Midwest in the winter, and that’s when this disease proliferates. His job is to find controls.

Kerns is an assistant professor and extension specialist in plant pathology at the University of Wisconsin, Madison, and he and his colleagues run one of the few labs in the country doing in-depth diagnosis and testing of controls for snow mold. He’s had a lot of experience with the pathogens responsible, and his work is applicable across the northern tier of states and in higher elevations in states such as Colorado. 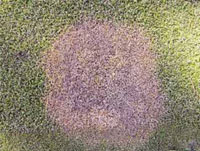 Chemical treatment must be done in the fall before the first frost. It is too late in the spring after emergence.

The disease occurs when the fungi Typhula incarnata and T. ishikariensis over-summer in turfgrass thatch and soil. In late fall and early winter, as temperatures drop below about 65 degrees, spores germinate, but it is snow cover that really promotes the fungal growth, leading to infection. It is primarily a disease of creeping bentgrass, though it can also occur in other cool-season grasses such as Kentucky bluegrass and tall fescue. He notes that the velvet and colonial bentgrasses also are susceptible.

“You need at least 60 days of snow cover,” Kerns says, though there can be some development under leaves or greens blankets. T. incarnata can proliferate in as few as 60 days, but T. ishikariensis requires 90 days or more. In the spring, infected grass will be matted and light colored. There are cultural practices that can decrease the incidence of the disease, but none that can prevent it once it is present.

“One of the major things we’ve been trying to get people to limit is late-season fertilizer applications,” he says. He recommends that no fertilizer be applied after October 15 in Wisconsin, or whenever the first frost hits. He notes that research forthcoming from Cornell University indicates that potassium applications may diminish the incidence. Kerns points out that it is also important to keep mowing turfgrass in late autumn, because any tall grass under a snow cover provides an “incubation chamber” and more habitat for the fungi.

One of the reasons that more isn’t known about cultural management is that there are so many highly effective chemical controls, he says. Typhula blight is easily controlled with the proper applications, though the two species may require somewhat different consideration. T. incarnata tends to appear around February and March, and T. ishikariensis later as the snow melts. At sites where there is moderate pressure, many chemicals work remarkably well.

Kerns recommends treatment before snow falls, but not too early. In Wisconsin, treatments can be scheduled from the first of October to the end of November, but the chemicals undergo degradation in sunlight. Thus, an application applied too early may require a follow-up treatment, while a single application late in the season will almost always be sufficient.

He also recommends mixing chemicals for the best results on both Typhula species. There are several good mixes, but he has tested three extensively and found them to be efficacious. The first is the use of a demethalation inhibitor, or DMI (Trinity, Banner Max, Triton Flow, Tourney and many other generics), with a chlorothalonil product (Daconil). Instrata is a pre-mix of these chemicals that is often used now.

Another good mix is a DMI with a thiophanate-methyl product (3336 Plus, or one of many generics, such as QP TM or QP Propiconazole). Kerns has had particularly good luck applying this mix in one treatment late in the season.

Typhula blight, or gray snow mold, is a disease that can be lessened through cultural methods and controlled by chemicals.

The third recommended mix is Iprodione (Chipco 26GT or one of several generics such as QP Iprodione) with a chlorothalonil (Daconil or a generic such as QP Chlorothalonil). This blend is effective not only on Typhula blight, but also on other fungi.

Kerns has also tested other efficacious premixes such as Tartan, and there is a new blend from Bayer coming out called Interface, which has been “phenomenal” in treating Typhula blight in his trials. It has been 100 percent effective on greens in his experience. With any treatment, he does not recommend applying chemicals to patches that are still showing fungal growth in the spring.

“Once the snow melts, you’re not going to see the fungus advance,” he says. He and his colleagues at Wisconsin recommend taking steps in the spring to get grass growing quickly. That means good early fertility, primarily. Usually, any active mold in the spring only blights the foliage and is not a threat to kill grass unless there has been an extreme and prolonged snow cover.

He points out that pink snow mold is a completely different issue and may require chemical treatment in the spring after the snow melts. For that reason, it is important that turf managers properly diagnosis the pathogens on their facilities. “I think one of the key things is to know which snow mold you’re dealing with.” It is a waste of money to treat Typhula blight in the spring, but the economics may be better for pink snow mold.

Grass/pathogen samples can be sent to a number of diagnostic labs around the country, with results coming back as quickly as 24 hours. This is often done in the spring on holdover disease patches because it is more difficult to find the pathogens in October.

Kerns has also been looking at situations where there is a long period of snow cover early in the winter, then a melt and then a subsequent period of snow cover. He says that treatment may be advantageous during that melt period, but only if the ground is not frozen. The snow molds are much less active when snow falls on frozen soil and in that case will probably not be a problem during the second snowfall.

Ultimately, he says, turfgrass managers in any area will have to make a judgment on whether to use one of the above chemical treatments based on their historical snowfall records. If they haven’t treated and they get unusually heavy snowfall, they will just have to live with the pathogen and stunted grass for a while. Typically, the grass will survive.