Global warming or not, the landscape industry remains confident it can deal with whatever Mother Nature brings.

Gloomy scale (Melanaspis tenebricosa) is a tiny insect, the crawlers of which are a mere 1/64-inch long. This small armored scale is a serious tree pest in the eastern U.S. Its size hardly seems to suggest that it could play a big role in warning us of the consequences of increasing urbanization and climate change. But it does, says Dr. Adam G. Dale, assistant professor of turfgrass and ornamentals at the University of Florida.

These destructive tree pests, like many other small seemingly insignificant things (a mere degree or two of warming of our environment?) can have a huge impact on the livability of our neighborhoods and also on our livelihoods, which are so dependent on keeping the plant life under our care healthy and attractive.

Dale, while completing his post-graduate work at North Carolina State University at the time, teamed with Dr. Steven Frank, associate professor of entomology, to study the urban heat effect on gloomy scale populations on red maples at 26 sites in Raleigh. In all, they evaluated the health of 2,780 trees. They discovered and published that even small increases in temperature profoundly affect gloomy scale populations.

“Temperature was the most important predictor of gloomy scale abundance – the warmer it was, the more scale insects we found,” he continues. The highest temperatures, not surprisingly, occurred in areas of the city with the greatest amount of impervious surfaces, such as streets, sidewalks and parking lots.

“This work makes us think that increasing urbanization and rising temperatures associated with global climate change could lead to increases in scale insect populations, which could have correspondingly negative effects on trees like the red maple,” adds Dale, careful not to speculate beyond what the research showed.

Destructive pests on the move

Tree expert Rob Gorden appreciates the science performed by researchers like Drs. Frank, Dale and the many others who are gathering evidence of how our climate is changing and what it may mean to the green industry in the years to come.

“In my mind, the impact of climate change on our country is rapid and is reflected in larger swings in weather patterns,” says Gorden, director of urban forestry and business development for ArborJet. “It’s resulting in more severe weather in some regions of the country and less severe weather in other locations.” 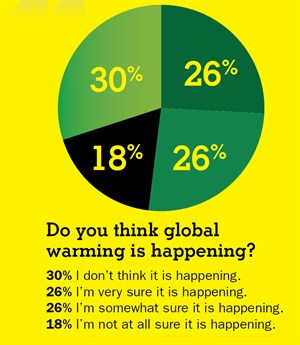 Gorden says although many people deny climate change and global warming—or that it is being exacerbated by human activity—he is convinced otherwise based on what he is witnessing.

Gorden points to the spread of hemlock woolly adelgids into regions of New England where they were previously rare. This pest, true to its name, is particularly destructive to hemlocks. Similarly, he cites the arrival of southern pine beetles (SPB) into southern Connecticut. “The southern pine beetle doesn’t belong there. It shouldn’t be there, but it’s there and it’s causing damage,” says Gorden. While he believes 2012’s Hurricane Sandy, which ravaged New Jersey and New York, helped the SPB move farther north into the Northeast, he’s convinced climate change is an equally large factor in its march northward.

The U.S. West also doesn’t escape the effects of climate change in terms of the spread of destructive pests and the diseases they may bring with them, Gorden adds. The mountain pine beetle is expanding its range from Colorado and surrounding states north into southern Canada. As it moves into new areas, it brings with it a disease fungus that is very destructive to host trees, he says. 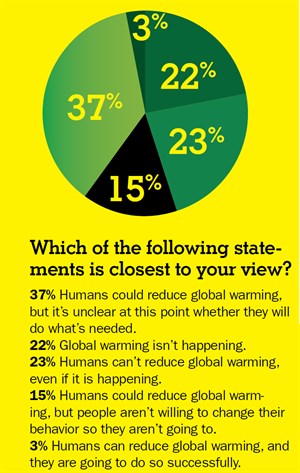 Gorden acknowledges that climate change is a hot button topic. “When you are talking about climate change, it is with a certain hesitancy because some people, even people within our own industry, will dismiss it saying, ‘it’s just fluctuations in the weather,'” he points out.

Global warming’s effect on insects, is complicated because all living organisms, both beneficial and destructive, may respond to it differently. Even so, most researchers feel that because insects are cold blooded, rising temperatures will:

Similarly, weeds and plant diseases are expected to respond to warmer conditions by extending their ranges further north and to higher altitudes. 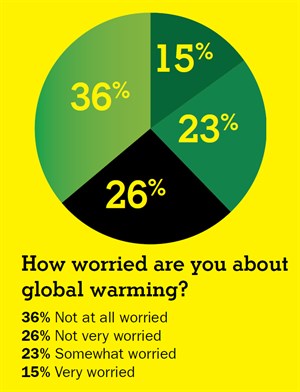 So, what does this mean to the landscape industry?

All living organisms are dynamic, opportunistic, always seeking to procreate and, in many instances, extend their ranges. The landscape industry is no less dynamic and opportunistic. And, unlike the snail-paced changes to biota resulting from climate change (even what researchers warn as today’s historically rapid change), landscape companies are constantly adjusting their practices to deal with insect, weed and disease issues caused by “unusual” weather. 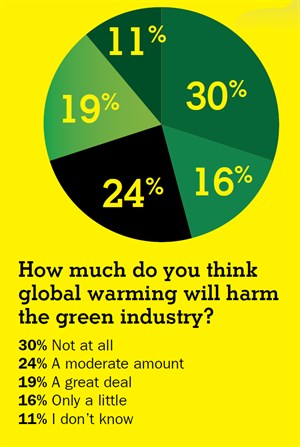 Indeed, few industries react as aggressively to weather changes, and how these changes affect the turf, ornamentals and urban trees under their care, than does the lawn and landscape services industry. That the industry is also blessed with responsive researcher/educators, product developers, manufacturers and well-established product distribution channels, appears to give it even greater confidence that it can handle whatever Mother Nature throws at it—into the foreseeable future anyway.

Indeed, judging by the lack of apparent interest and responses from company owners, it’s probably safe to surmise that the issue is not high on their lists of immediate concerns. 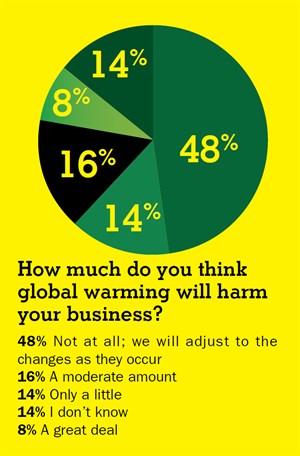 That seems to be reflected in Turf‘s recent Climate Change Survey. By a 2-to-1 margin, respondents said the president and Congress should make global warming a “low” rather than “high” or “very high” priority.

Tellingly, just under 30 percent of the industry members answering the survey indicated they “don’t think” global warming is underway. This degree of disbelief is not shared by the larger agricultural community and, in some cases, by influential segments of the green industry either. 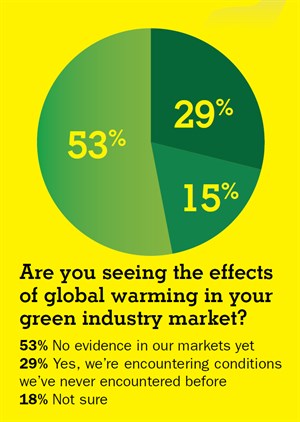 Similarly, The Landscape Institute, based in London, in 2013 published a 22-page position paper on climate change, urging its architect, contractor, planner and ecologist members to take steps to address it in urban environments. Closer to home, the American Society of Landscape Architects keeps it members aware of research and issues related to climate change, as well. 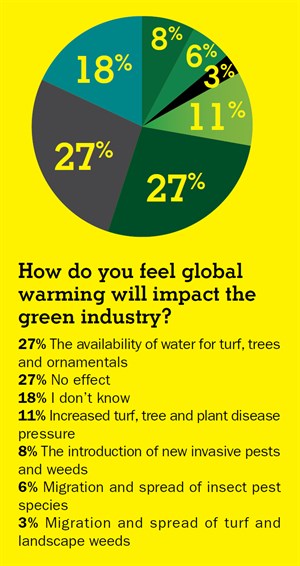 “As a scientist, I believe climate change (e.g. global warming and CO2 elevation) has impacts on agricultural production, including turfgrass systems,” says Dr. Yiwei Jiang, assistant professor turfgrass/physiology at Purdue University. Jiang says the long-term effects of climate change will put new stresses on some plants, such as turfgrasses, and favor growth in others, including weeds.

Jiang, a native of China who did his undergraduate studies at Inner Mongolia Agricultural University and earned his doctorate degree at Kansas State University, is researching the physiological traits associated with the stress tolerance of turfgrass species. Jiang and his collaborators are seeking to advance the development of turfgrass species specifically adapted to water-deficit, flooded and salt-affected sites.

“This means that turfgrass plants (or newer varieties) need to become more resistant to harsh and stressful conditions to better adapt to their local environments,” Jiang points out.

Turfgrass breeder Dr. William “Bill” Meyer and his small team at Rutgers University are engaged in research with similar aims, but it’s done on a much grander scale.

After 23 years working in Oregon’s Willamette Valley (the turfgrass production center of the world), Meyer came east to take over the prestigious program at Rutgers University, then being run by turfgrass expert Dr. C. Reed Funk, who died at age 84 in 2012.

“We were doing some low-maintenance work prior to 2008, but we’ve greatly expanded the program since then,” says Meyer, a professor of plant biology and pathology.

Today, about half of the 40,000 turf plots at its Adelphia research farm are being evaluated for conditions such as drought, heat and greater insect and disease pressure.

Yes, says Meyer, future environmental conditions will demand the industry use fewer energy inputs in terms of chemicals, irrigation and maintenance in providing homeowners with landscapes, especially turfgrass, that remains healthy, attractive and continues to provide the many environmental and aesthetic benefits they’ve come to appreciate.

Read more: Worried About Climate Change? Soils Have Our Backs