As of April 1, the Professional Landcare Network will become The National Association of Landscape Professionals.

Then, the newly joined association chose a name that represented the many disciplines of its combined membership—from lawn care to maintenance to design/build to tree care to snow and ice management to interiorscaping to everything inbetween.

But a lot can change over a decade. While the 4,000-member association’s service makeup has only increased in variety as the industry has evolved, the name itself has become harder to understand. In a recent PLANET member survey, 90 percent of respondents said they have to always or usually explain what the name PLANET means. “Over the years, we’ve been having a harder time explaining what PLANET is,” explains Sabeena Hickman, PLANET’s executive director. “As we’ve gotten more penetration into the consumer market, our PR firm spent more time explaining who we are as they pitched stories versus the benefits of what we provide to people.”

“In a day when quick hits and 140 characters are the norm, we don’t have the luxury of explaining what we do again and again,” adds Jim McCutcheon, CEO of HighGrove Partners, Austell, Georgia, and current president of PLANET.

When asked what the association could improve upon, the single most cited answer in the PLANET member survey was improving the perception of the industry and promoting the industry (25 percent). This goal was becoming harder to achieve with a name that was posing some hurdles when it came to explaining what the association does and what types of members it represents.

The association’s board knew it reached a time when a name change may help it grow, but it didn’t want to just change its name. “We decided we needed to invest in a rebranding effort,” Hickman says. “If we were going to change the name, we wanted that name to come with an image, a program and a strategy so we could create a more robust future for the lawn and landscape industry.”

On Feb. 26 at PLANET’s Great Escape educational and networking event, PLANET unveiled the results of months of research and strategic planning: The National Association of Landscape Professionals (NALP). 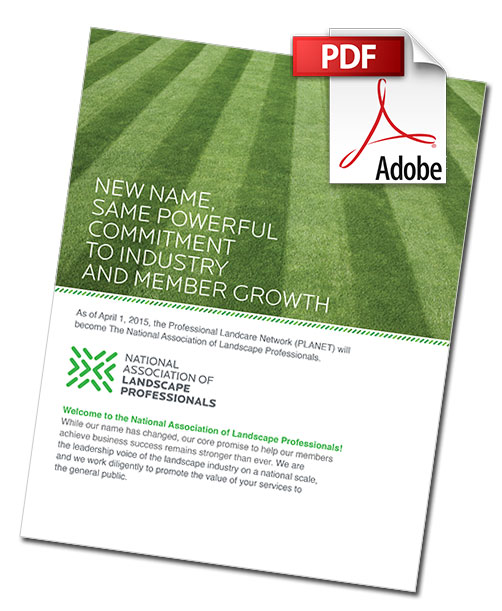 Going from PLANET to NALP
When ALCA and PLCAA merged in 2005, the new name of the joined associations was meant to convey the many current and future membership disciplines. The association’s board has a lot to focus on at the time, including ironing out the logistics of the merger itself, as well as exploring a few other potential mergers. The goal was to become an umbrella organization that other industry associations could join. That same year, PLANET and the American Nursery & Landscape Association had signed a letter of intent to merge before they ultimately decided against the agreement later in the year.

Ultimately, the Professional Landcare Network was chosen because “professional” stood for the members’ credibility/competency, “landcare” represented the diverse membership base and “network” identified the group as an association. In creating a name then, the term “green,” which has been used to refer to the lawn and landscape industry, had become muddied by the sustainability movement, so green industry was avoided because consumers deemed it confusing. Also, PLANET’s mission to merge with more associations didn’t come to fruition, Hickman explains.

Fast-forward to today and “landcare” has become challenging to explain to consumers and potential members, and “network” tends to be thought of as a peer group, Hickman explains. PLANET the acronym was also misunderstood, occasionally mistaken for an environmental group. While the name meant something in the beginning, as times changed it became less clear that it truly and clearly represented the association.

So, one year ago, the conversation of a rebranding began. PLANET hired the marketing and branding firm DeSantis Breindel out of New York and formed a strategic task force to focus on the effort. In the PLANET member survey, more than 70 percent of members were in favor of pursuing the rebranding, Hickman says.

Twelve names resulted after the member survey and consumer research were conducted. Those were whittled down to five and then tested through focus groups, which included a balanced representation geographically, by service specialty, business size and supplier/contractor designation. Both focus groups landed on the same name. That name and the research used to come up with it was then presented to the PLANET board for discussion, including 25 PLANET past presidents before it was ultimately approved.

More than a name
While a new name is big news for PLANET, “it would have been a short cut to just change the name and move on,” explains Scott Jamieson, vice president, corporate partnerships and national recruiting, Bartlett Tree Experts, and incoming PLANET president. “After announcing the new name, we expect people to say, ‘OK, what’s next?’”

“We knew a name wasn’t going to mean anything without something behind it, some goals,” McCutcheon adds.

A rebranding is a chance to look at the overall association and its promises and hone in on what it’s doing right and where it may be missing the mark. In evaluating the association’s programs and benefits, three key focus areas rose to the top for members:

1. Relentless advocacy. NALP will represent the industry in pressing issues—from pesticide and water use to H-2B regulations to safety.

These three things resonated with members. “At the end of the day, it’s all about how we can better serve our members and the industry,” Jamieson says. “We decided if we want to deliver member value, we should stand for these three things and build the association around this. We know we’ve been strong in some areas and not in others. We have to be strong in these three areas. I want to belong to a group where education is big and there are higher standards and advocacy is a focus.”

With a vision and goal, now PLANET is evaluating its programs and looking at which ones make the most sense and which ones don’t. “We’re going to be announcing a realignment in programing where some things may be consolidated, some things may go away and there may be some new things,” Jamieson explains. “There will also be the acquisition of new talent to the association to focus on areas where we’ve been weak.”

Where’s the “lawn?”
When PLANET was discussing its rebranding, there were those in the industry who worried different segments of the market might get lost. How does an association come up with a name that represents every service its members offer, yet also make it simple enough for the average person to understand in an instant? This became a daunting task.

“No way in the world could we throw everything we can do in a name and keep it simple,” McCutcheon says.

Because one of PLANET’s founding associations—PLCAA—had members strongly rooted in lawn care, it was a natural to think the term “lawn” would show up in the name. “I thought early on that lawn would probably be in the name,” Jamieson says. “But the moment we looked at different options and saw lawn and landscape, it seemed to create two silos. On the other hand, landscape professional by itself stood for everyone. It encompassed everything from irrigation to interior to tree care. We are truly all landscape professionals. It finally clicked.”

While conducting market research, when consumers were asked what they thought lawn care versus landscape people do, there was virtually no difference, McCutcheon explains. “The fact that we all work in the landscape became the critical piece,” he says.

Simplicity won. “The whole concept is we’re trying to take the association from good to great, and we’re drilling down and focusing on what we need to do to make that happen,” McCutcheon says. “Before, we tried to do everything for everybody and it muddled our messaging. Now we are focusing on our pillars and making sure what we do for everybody fits in those pillars.”

The uncomplicated name “should also be simple enough to drive membership and value on capital hill or in front of legislators,” Jamieson adds. “It sends a strong message that there’s a professional association out there representing our industry.”

PLANET membership has remained stagnant over the past decade, but there are hopes the rebranding will help draw some new blood to the organization. “I firmly believe—and everybody believes—we’ll attract a lot more members to the association now,” McCutcheon says.