MARYSVILLE, Ohio — The Scotts Miracle-Gro Company (NYSE:SMG), announced strong sales and adjusted earnings growth for its fiscal third quarter. The company also reiterated its full-year adjusted earnings guidance range of $3.40 to $3.60 per share and said it expects sales for the full year to exceed its original outlook to a range of 5 to 6 percent growth.

For the quarter ended June 27, 2015, company-wide net sales increased 9 percent to $1.21 billion due to strong growth for both Global Consumer and Scotts LawnService. Adjusted earnings improved 15 percent to $2.68 per share, excluding impairment, restructuring and other one-time charges.

“We’ve seen meaningful market share gains in key categories, have had a solid year of execution and continue to get outstanding support from our consumers and retail partners,” said Jim Hagedorn, chairman and chief executive officer. “I’m pleased with our overall execution in the areas that we can control and I applaud our associates for their continued focus. But whether it was the harsh and extended winter in the Northeast, historic flooding in Texas, the record rainfall this summer in the Midwest or the drought in California, 2015 has been a season of extremes.

“The fundamentals of the company remain strong and most of our product categories have fared well. The weather-related impact on lawn fertilizer, however, has caused product mix challenges that will result in a lower-than-expected gross margin rate. Even with those challenges, I am confident in our ability to achieve the earnings guidance we established early this season.”

Global Consumer sales increased 9 percent, or 12 percent excluding the impact of foreign exchange rates, to $1.10 billion. The increase was driven by a combination of organic sales, up 6 percent, and acquisitions, which contributed 6 percent growth. Scotts LawnService sales increased 12 percent to $103.7 million in the third quarter primarily due to higher customer count and the impact of acquisitions.

For the quarter, the company-wide adjusted gross margin rate was 37.5 percent compared with 37.9 percent a year ago. The year-over-year difference was primarily attributable to unfavorable product mix. Selling, general and administrative expenses (SG&A) were up 3 percent in the quarter to $193.8 million.

Adjusted income attributable to controlling interest from continuing operations was $167.2 million, or $2.68 per share. That compares to $146.0 million, or $2.34 per share a year ago. Those results exclude impairment, restructuring and other one-time charges in the quarter of $51.7 million primarily related to current and expected costs associated with consumer complaints regarding the company’s newly formulated Scotts Turf Builder Bonus S Southern Weed and Feed product. ScottsMiracle-Gro withdrew the product from the market in nine states in mid-May and has been working with affected homeowners who reported lawn damage after using the product.

“We now expect internal costs related to this issue to be in the range of $7 to $10 million, which is slightly higher than our original estimates,” said Randy Coleman, executive vice president and chief financial officer. “While we also have established a much larger insurance reserve in the quarter to cover the total expected claims costs, we will begin to recover those reserves as we receive reimbursements from our insurance providers in the weeks and months ahead.

“Given the one-time nature of this issue, we believe it’s appropriate to exclude any costs related to Bonus S from our adjusted earnings so that investors can get an accurate picture of how our business has performed this year. This is an approach that is consistent with our past practices. We do not anticipate the Bonus S issue having any negative impact on fiscal 2016.”

When including all charges, income attributable to controlling interest from continuing operations was $133.4 million, or $2.14 per share. That compares with $120.7 million, or $1.93 million from the same period a year ago.

Net sales for the first nine months of fiscal 2015 increased 6 percent to $2.53 billion, compared to $2.39 billion a year ago. Sales in the Global Consumer segment increased 6 percent, or 9 percent excluding the impact of foreign exchange rates, to $2.33 billion. Within the segment, organic sales increased 5 percent and acquisitions accounted for 4 percent growth.

For the first nine months of the year, Scotts LawnService sales increased 8 percent to $180.8 million.

“Expense control continues to be an outstanding story and one that will remain a focus going forward,” Hagedorn said. “When excluding the impact of acquisitions and currency changes, SG&A is essentially flat as we continue to benefit from a disciplined approach to spending as well as restructuring efforts that have made us a more efficient organization.”

In addition to re-affirming its adjusted earnings guidance, the company increased its sales growth outlook from a range of 4 to 5 percent to a range of 5 to 6 percent. The gross margin rate, originally projected to be flat year-over-year, is now expected to decline 50 to 75 basis points. SG&A is expected to increase approximately 3 percent for the year. 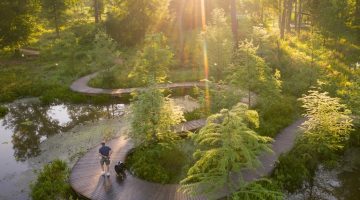