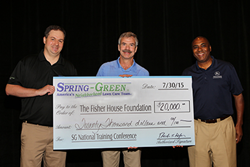 The Spring-Green National Training Conference silent auction raised $20,000 for the no-cost comfort homes where military and veterans’ families can stay during medical treatment.

PLAINFIELD, Ill. — Spring-Green Lawn Care held its annual National Training Conference July 29–Aug. 1, 2015, at McDonald’s University in Oak Brook, Illinois. All Spring-Green franchise owners and support center staff gathered for the event, which was filled with insightful hands-on training and multiple opportunities to network with other owners from the entire Spring-Green franchise system.

Spring-Green’s core values—ecstatic customer base, pursue common goals, innovate to improve, do right, respect for all, move forward—are evident throughout the organization, our vendor partners and at the conference. Attendees were privileged to hear Retired Lt. General Randall L. Rigby speak at the event. Lt. General Rigby is a former artillery officer who was awarded two bronze stars for his combat service in Vietnam. He also served as a West Point instructor and in several key positions within the Pentagon.

Spring-Green’s key vendors and suppliers generously donated items that were bid on by the conference attendees. “This is the second conference in a row we’ve elected to donate silent auction proceeds to the Fisher House Foundation, which builds on-site housing at military hospitals to provide lodging for the families of current military members or veterans who are hospitalized,” said James Young, Spring-Green president. “When this year’s Silent Auction was completed, we had raised a total of $40,000 over the last two conferences for this great cause.”

The silent auction benefitting Fisher House Foundation is not the only way that Spring-Green works to help veterans. Spring-Green’s military history is evident throughout the franchise organization. The company has multiple veteran-owned franchises and employs hundreds of veterans and reservists through the company-owned and franchise network. Spring-Green’s ties to veterans run even deeper, however. Tom Hofer, co-founder of Spring-Green, is a veteran of the Vietnam War, where he served as a Navy pilot conducting anti-submarine missions.