When water accumulates behind a retaining wall, the lateral forces acting on the wall increase. The more water that has collected behind a retaining wall, the greater the hydrostatic pressure on the wall will be. If the overturning moment (caused by the total lateral forces) exceeds the resisting moment (caused by the total vertical forces), the wall will fail. 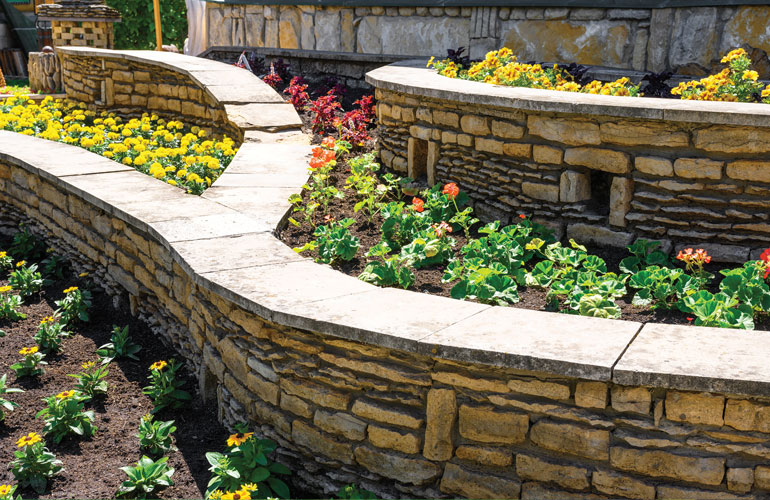 There are several ways to prevent water from building up behind a retaining wall. Weep holes should be drilled through the wall. Weep holes allow water to escape from behind the wall. These holes should be regularly spaced in the horizontal direction. Retaining walls with a height greater than a few feet should also have weep holes that are regularly spaced in the vertical direction, forming a grid pattern.

Another method for relieving hydrostatic pressure is to install a drainage pipe behind the wall. This should be a perforated pipe, to allow water to enter it through the length of the wall. The pipe can be located just above the footing, or can be located at a higher elevation. Taller walls may require more than one drain pipe to sufficiently relieve the hydrostatic pressure. This can be done by placing one pipe near mid-height of the wall, and another pipe near the footing of the wall.

A cohesionless, granular soil should be used as backfill to allow water to penetrate the soil to reach the drains or weep holes mentioned above. If a cohesive soil is used, such as clay, it will be difficult for the water to reach a depth where it can enter a pipe or weep hole. Granular materials allow for water to permeate through the backfill, rather than being trapped within it. As gravity pulls the water downward, the granular backfill lets the water freely pass until it reaches weep holes or pipes.

Ideally, these and other methods would be combined to create a redundant system. Proper grading will minimize the amount of water that will be directed toward the wall. A backfill made up of cohesionless, granular materials will allow the water that is directed toward the wall to penetrate the soil rather than building up above or within it. Weep holes will allow the water moving through the soil to escape to the other side of the wall. Drainage pipes allow additional water to move away from the wall instead of accumulating behind it. These methods will help to reduce the amount of hydrostatic pressure acting on a wall. Without the added lateral force, the wall is able to remain in service for the duration of its intended life.

Do you have a comment or business experience to share? Share your thoughts in the Comments section below, or send an e-mail to the Editor at [email protected].