Spanish for the Green Industry

The American landscaper may not comprehend the Latino language, and may wonder if his workers understand him. He concludes they show disrespect, because they fail to make eye contact. Each scenario involves misunderstandings of language and culture by both parties.

An instructor at Virginia Tech in Blacksburg, Va., is working to bridge the gap between the landscape owner, crew leader and Latino laborers so they can avoid any misunderstandings on the job.

Seven years ago, Barbara Kraft developed a one-credit-hour course elective to teach Spanish to horticultural students so they can better communicate with the Latino workforce. During that time, she placed more emphasis on language, culture and immigration issues. About two and a half years later, and as the Latino workforce increased, the industry pushed for the class to become more than an elective.

One of those pushing for the course to be a requirement was Joe Ketterer, a production specialist for the Mid-Atlantic Division of The Brickman Group, Ltd., headquartered in Gaithersburg, Md. When he started with the company 24 years ago, Brickman relied solely on local labor in the Maryland market. This resulted in high turnover and inconsistent work.

“When we introduced Hispanics into our labor force, we found quality and consistency improved dramatically,” Ketterer says. “They are a much more stable and dependable labor pool, and we value their contributions greatly.”

The class is held on a Tuesdays and Thursdays, and is offered at three times on those days. The popularity of “Spanish for the Green Industry” has drawn the attention of more and more landscape industry leaders who have communicated to Kraft the increasing need for her class among students and future landscapers.

Through the course, Kraft hopes to teach students not to be afraid of speaking with and learning from Latinos. “My whole purpose is to teach communication through speaking and through understanding [of other people’s culture],” Kraft says.

Most of her students already work summers with landscapers or superintendents at golf courses. “The majority of laborers are becoming Hispanic, so it’s important to be able to communicate with the laborers who work for you,” says student Jeremy Waddell, from Appomattox, Va. He works part-time at the Pete Dye River Course of Virginia Tech in Radford, Va.

Kraft, who grew up in Mexico and Venezuela as a child through high school, updates her course every semester and offers students the basics with the aid of a booklet she developed called, Spanish Guide for the Green Industry. She teaches language geared toward vocabulary they will use while working with Latinos. The Spanish vocabulary focuses specifically on commands—rather than grammar sessions—that a landscape owner or crew leader would communicate to workers such as “Go get the shovel” and “Dig a hole here.”

She also teaches students Latino culture. “To be a better manager, you really need to understand the people that you are working with,” she says.

The misunderstandings go two ways. Latinos often will say they understand the commands of their English-speaking bosses when they really don’t. Kraft says Latino workers should question their boss if they don’t understand. As a supervisor, the landscaper or crew leader needs to learn that he must instruct his workers to repeat or reshow him what he has instructed them to do, so he will know they understood him.

“The growth of the [number of] Latinos in the workforce grew so fast that we’re backtracking now in learning and realizing we need to learn a little bit of the culture, a little more language, which helps save time during the day,” Kraft says. “Saving time is saving money for a lot of people in these corporations. If students can get from point A to point B a little faster because they took my class, the companies benefit from it, too.”

Ketterer agrees, and if he had his way, Kraft’s course would be required for horticultural students during all four years of their college stay.

Another part of the course covers current immigration issues. Students learn about the H2A and H2B federal government programs and about current and possibly future laws on the floors of the U.S. House of Representatives and U.S. Senate at the Capitol in Washington, D.C., as well as local laws in each state House and Senate.

Her class includes a ratio of about 50-50 of students who can speak Spanish and mainly English. She wishes the mix was 80-20 or 90-10, with more being able to speak some Spanish. For her, the even ratio presents a challenge. To overcome this, Kraft groups some students who speak better Spanish with ones who don’t know as much, so the more fluent Spanish-speaking students can help the others along. Together, they all learn from each other.

She learns from her students, too. Since that first class seven years ago, Kraft understands what students need as far as their vocabulary and what knowledge they have about the Spanish language, the Latino culture and current immigration events.

To entice her students to learn more, Kraft encourages them to watch Spanish TV, listen to Spanish radio, join Hispanic clubs on campus and order meals in Spanish at Latino restaurants.

The suggestion and Kraft’s class have made a difference. Walking on campus, Teague finds herself picking up on Latino conversations of workers and students and understanding partially what they have said. That surprises her.

To talk with Barbara Kraft about how her course can help you, contact her at bkraft@vt.edu .

The author is a freelance writer in Danville, Va., and can be contacted by e-mail at rockyagwriter@aol.com .

About the Author Rocky Womack 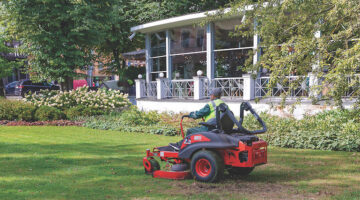