While there’s a lot of landscaping tasks that need to take place before the first freeze, luckily tree and shrub pruning is not one of them. In fact, there are actually several advantages to winter pruning — for both you and the plant. Here are a few.

Visibility. When leaves have fallen from shrubs and trees, you can see the branch structure better. Shaping and eliminating crossed branches becomes much simpler, as does identification of any damaged or diseased branches.

Less pest/disease risk. Pruning cuts are like a temporary wound on a tree. In winter months, these cuts will have less exposure to potential negative effects. According to a blog from Arbor Experts in Dayton, OH, “Tree diseases are typically caused or spread by bacteria, fungi, parasites, and insects. Unless the weather has been exceptionally warm, these disease agents are usually dead or dormant during winter months. As a result, diseases are less likely to be transmitted through tree work done in winter. Some trees, such as elm and oak, as well as trees infected with fire blight, are best pruned in winter specifically to minimize the risk of spreading Dutch elm disease and oak wilt.”

Better overall health. When a tree is in dormancy, cuts heal faster and cause less stress to the tree. “A tree’s normal reaction to pruning is to stimulate new growth and to close the wound made by the pruning cut. When a tree is pruned in winter, it doesn’t cause new growth until spring, at which time the tree has access to the moisture, sunlight, and nutrients it needs to support healthy growth,” say Arbor Experts.

Less lawn damage. Pruning large trees can require bringing in heavy equipment that has the potential to damage landscapes. Yet when temperatures are low enough, the ground in many regions will freeze. This more solid surface with dormant turf means such equipment has less potential for causing harm. Additionally, any perennial, annual, or vegetable gardens will be frozen and potentially vacant, rather than large and lush. Not only is this one less consideration in terms of damage risk, it can provide more space for equipment to maneuver. 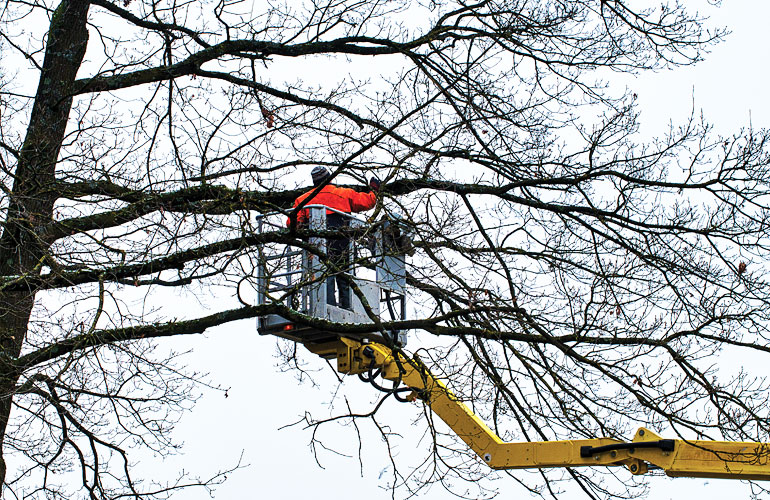 Since winter encompasses a fairly long stretch of time, when exactly is the best time for dormant pruning? According to Melissa J. Will, who has an excellent blog entitled Empress of Dirt, the best time, specifically, is, “late winter, while the plants are still dormant, a few weeks before buds start swelling and sap starts flowing again.” She continues, “Late winter is considered to be four to six weeks before spring thaw begins. This could be any time in January to May, depending on your climate. Use your average last frost date and count back (as shown in the guide below from the blog.)”

Will believes late winter/early spring is actually the best time for pruning most trees, shrubs, and vines, year round. The exception is early spring bloomers which should be pruned after flowering, in the summer. Pruning in the fall should be avoided, she says, since it stimulates new growth, which isn’t desired when winter is around the corner. Dead, damaged, and diseased branches, however, can be removed any time.

“Here in the Idaho Falls area, your trees and shrubs will get the best benefits of winter pruning if you tackle the task before any hint of spring,” wrote Chase Coates of ID-based Outback Landscape Inc. in his blog. “A sunny day in January or February is a great time to prune. Head out with the shears too early, and your trees and shrubs aren’t yet dormant, and those fresh cuts you make will invite insects and disease. Start snipping too late, in spring, and you could nip off buds and prevent any flowering.”

Coates also notes that ornamental grasses can wait to be cut back until late winter. “Many of them add interest, grace, and movement to [a] winter landscape,” he writes. “Frilly tassels look pretty with a dusting of snow, and the seed heads can feed the birds. Pick a sunny day toward the end of winter—or as late as March—then cut them to about six inches above the ground.”

To Prune Or Not To Prune

What are some spring flowering trees and shrubs that shouldn’t be pruned in late winter? According to Campbell & Ferrara, a landscape design/build company in Alexandria, VA, plants like lilacs and azaleas should instead be pruned right after flowering for best growth. The same goes for roses that only bloom once a year, such as damasks and mosses. It should be noted that trees that produce sap—like maples, ash, birches, elms, dogwood, oak, sycamore, and walnut—can create an unsightly “bleed” if pruned in winter, however it will not affect growth of the tree.

Not only is winter an ideal time for pruning for the health of the tree and shrub, but it can provide lawn care and landscape professionals with a revenue-generating service in an otherwise slow season—especially in areas where substantial snow and ice accounts are not feasible.

“In addition to our regular work in the fall, we really try to get on all of our clients’ properties and build winter backlogs, then set aside work we can do during the winter, like applying anti-desiccants and conducting winter pruning,” said Almstead. “We go through a campaign in which we talk to our clients about the things they should be doing during the winter and what we can handle for them.” Almstead told Vermeer his marketing team has also sent emails to existing customers before winter storms to let them know of services the company can provide afterwards.

Essentially, an anti-desiccant is a waxy coating that slows transpiration (water released through plants leaves/needles) for about four months. Over the winter, when trees and shrubs are exposed to harsh conditions, water can be “lost” more quickly than it can be absorbed though roots. The result can be winter burn—essentially plant dehydration—that shows up in spring as yellow, brown, or damaged leaves. According to the blog of Independent Tree in Newbury, OH, especially susceptible trees and shrubs include those: exposed to wind or an abundance of sun; recently planted (within a year or two); recently under drought stress; or suffering from pests or diseases.

Application timing is crucial. Spraying too early, when plants are still actively transpiring, can trap too much water in the leaves that could freeze and cause cellular rupturing, according to the University of Massachusetts (UMass) Extension. For this reason, plants should be fully dormant, yet weather should not be freezing. Look for temperatures between 40˚ to 50˚ when rain has not fallen recently or is expected. UMass Extension recommends waiting until December to spray conifers in its region. Alpine Tree in Morristown, NJ, says in their blog, that due to anti-desiccant degradation over time, in their region “…an application in November may need to be repeated in January or February.”

It should be noted that conifers with waxy coatings, such as blue spruce, should not be treated with anti-desiccants. Also, due to the potential for damage, if unfamiliar with anti-desiccants “being conservative and applying first to a small portion of the plant may be the best way to proceed,” recommends UMass Extension. For a typical application, however, make sure to spray both the upper and under side of the leaves and/or needles.

Other protective measures like mulching and burlap wrapping can feasibly be performed for clients any time during the winter—but should happen before harsh conditions set in. Also, make clients aware of salt use and its damaging effects.

Independent Tree offers several tips to minimize salt damage on landscapes in its blog. Just a few include:

Keeping an eye on the season’s weather conditions and maintaining communication with clients can not only lead to off-season opportunities (if wanted and cost-effective), but better overall spring outcomes.