Drought surged to the top of Bay Area residents’ concerns in a poll taken at the end of June. The issue didn’t even crack the top three list the year before, but today the seemingly endless drought is changing how residents feel about water. The poll found 48 percent of residents heavily favor expanding the use of recycled water, turning seawater into drinking water and building dams and reservoirs. Eighty-nine percent of survey respondents said preparing for the drought is an important priority for the region.

The drought forecast isn’t surprising anyone on the West Coast. Through September of this year nearly every inch of Washington, California, Oregon, Nevada, Idaho and parts of Arizona and Utah show drought persisting or intensifying. Across the country, the only other areas where drought development is likely include parts of North Carolina and South Carolina.

While upbeat predictions in May said El Nino could provide some relief from drought, most experts say people shouldn’t count on it bringing the West Coast out of drought and especially out of reservoir storage deficits, which are a key part of California’s water woes, in addition to a shrinking supply of groundwater. 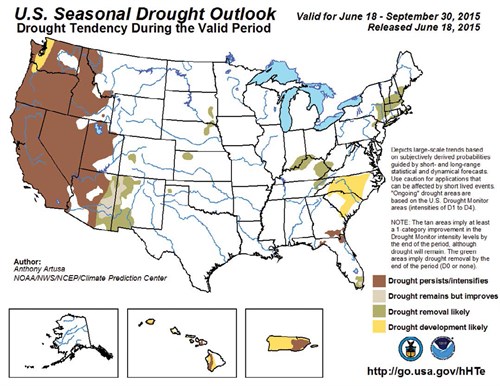 El Nino is no longer a quick fix for drought, say experts. With no magical drought-busters in sight, most folks are pointing to changing human behavior and water management as the real way to bust drought and survive. We’d love to hear what you think of the current drought and how it’s impacting landscape contractors.