Story of a Landscape: A Big Job Done in Small Steps 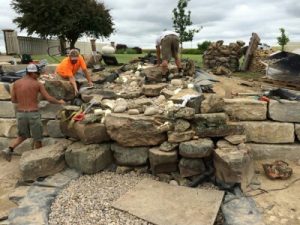 How do you eat an elephant? One bite at a time. And, how do you do a project that surprises you with its number of components and size? For Josh Graczyk, the secret is breaking it into a lot of smaller projects and then tying them into an award-winning whole.

Graczyk, owner of Grindstone Hardscapes and Graczyk Lawn & Landscape in Kearney, Nebraska, says he got the job based mainly on the referral of a local interior decorator. However, he was well into the design phase before he got a good grasp on just how massive a project he had taken on for a residential client more than two hours down the road in McCook, Nebraska.

“We had talked water features, and we had talked fire features,” he says. “The swimming pool was existing, so we had to tear that out and go around it. The main goal was to tie in the area from the house underneath the deck all the way to the pool and make that area usable (to the clients).”

As if that wasn’t enough, during the design process the client decided to expand the job further, leading to a driveway and new front entryway. Still later — during construction — a pathway to the property’s pool house and a revamp of the landscape were thrown in, as well. 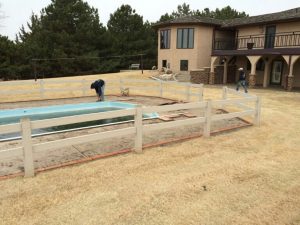 It was, he says, a little different animal than the average backyard patio.

“The biggest challenge on a job like this is the timing,” Graczyk says. “It’s a matter of coordinating everything and managing each individual aspect of the project. What I like to do is break it down into smaller projects. That helps the crews set goals and stay on task.”

Fire is certainly present in the project, as it sports both a grill island and a fireplace from Belgard. The water — besides the pool — comes from two water features. 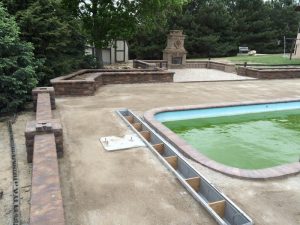 “There’s a fairly sizable moss rock waterfall in the backyard, right at the edge of the patio,” Graczyk explains. “Then, on the front walkway, there’s a small bubbling boulder we put in just for a little bit of sound as guests are walking to the front door.”

He admits that working with the existing pool and installing a new deck provided its own learning experiences.

“We tore out the old concrete deck and an old fence and went in with segmental pavers,” he says. “The pool had been in the ground for a while, but in working with a pool company we were able to put in a new tarp and a new diving board as we went on.”

Segmental pavers were the order of the day for much of the project: Graczyk estimates Grindstone installed some 4,500 square feet of pavers, in five different colors. 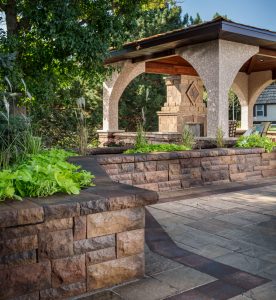 “I took a common color and a common band color and we switched out colors and textures as we went from one section to another,” he says. “We would use one color for the field and another for the band in one area, and then the next time, I’d flip it so the field became the band and the band was the previous field color.”

Much of it relied on Graczyk’s own eye, and he spent quite a bit of time on the job site, despite having one or two three-man crews on the job throughout the 29 workdays of the project. 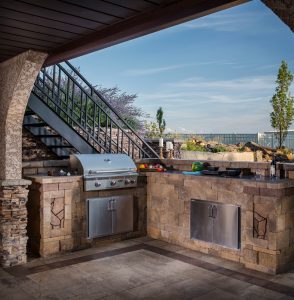 “I find color isn’t something that can be decided on a design,” he says. “I like to see the jobs as they develop and use our creativity as we go through the process.”

He adds that the entire project is sand-set to traditional Interlocking Concrete Paving Institute (ICPI) specifications using 6 inches of nonreinforced crushed concrete base with an inch of sand on top. The installation was put to the test the night after the poly-sand was installed when the area received 4 inches of rain in about an hour.

“We use a very high-quality sand, so it didn’t ruin anything,” Graczyk says. “We did have to do some cleanup, though.”

Other hardscape features include Belair Wall seating walls from Belgard and three hardscape planters built into the patio.

As for the landscape itself, Graczyk describes it as being fairly low-maintenance and somewhat rustic.

“There are a lot of boulders on it, a lot of conifers and nothing that needs a lot of water,” he says. “We used very little rock, other than in a dry riverbed we installed to help cover all the drains. The annuals in the planters — which we do for them — are where they get their color.” 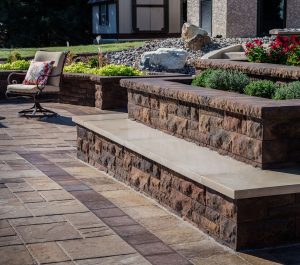 Graczyk says he’s particularly proud of the way the various components of the job tie together.

“It’s decorative, but it’s a very functional project,” he says. “It’s something the client can use with his family and grandkids, but he can also bring in someone from out-of-town with Champagne tastes and knock their socks off. I’m proud he has the ability to do that because we built it.”

The fact that it’s well-used makes him smile. 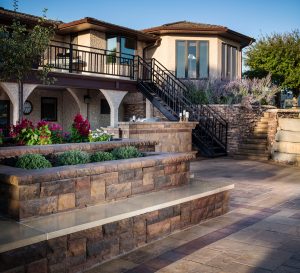 “Sometimes you put in a patio and you go back a year later and they haven’t even burned anything in the fire pit,” he observes. “These folks use it on a nightly basis, and we’ve had the pleasure of enjoying it with them through that process.” 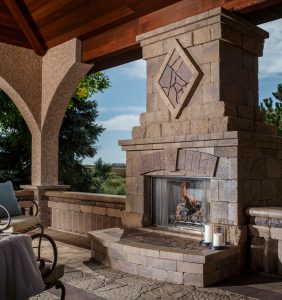 Graczyk and his crew have been invited back this year to do some additional landscaping on the property, including removing some berms and adding boulders and curbing. In total, he says the client has spent about $320,000 with his company, with the patio project winning last year’s award from Hardscape North America (HNA) for best residential paver project of more than 3,000 square feet.

As if that’s not reward enough, Graczyk says the whole experience was a very positive one for him. Not only did he make the acquaintance of the client, whom he describes as “a great businessman,” but he says it taught him lessons that can only be learned by taking on a project of its scope.

“When you do a project of this size and complexity, everything else becomes a little easier,” he concludes. “I learned how to manage when things weren’t there, when they were back at the shop or with our other crews. Sometimes we had to find new vendors. Sometimes we had to work with different materials because they didn’t sell the same thing, but we managed.”

Next post R.M. Landscape's Strategy to Be Productive While Pushing Snow