My small town on Lake Erie’s southern shore in northwest Ohio is struggling to maintain its economic dignity. The loss of manufacturing and well-paying union jobs these past few decades stripped it of much of its financial vitality. More than half of the storefronts in our downtown are vacant. Wal-Mart’s arrival just east of our city dried up much of the enterprise not already withered by the shutdown of our small manufacturing base. In that regard, our town probably resembles many other small Midwest hamlets.

Nevertheless, contrary to bleak reports of the economic rusting of the U.S. industrial heartland, the Midwest remains a fine place to live and raise a family. The cost of living is moderate. And, speaking specifically for my community, we’re blessed with good schools and a general sense of security. Yes, our community of 6,000 hearty souls has its share of problems caused by the many and varied human shortcomings. But you can walk our streets without undo fear of harm.

It was during one of these recent leisurely strolls to our 112-year-old county courthouse one late afternoon that I was suddenly and quite unexpectedly struck by my community’s greenness. I commented as much to my wife as we approached the meticulously maintained lawn surrounding the three-story, sandstone courthouse. The nicely trimmed lawn – dotted with leafy maple, oak and ash trees in various stages of growth – is the site of the city’s annual youth Easter egg hunt. Also, each Memorial Day many of its citizens gather there for a solemn ceremony. Memorial Day is special in our community. More than a dozen of the community’s young men, volunteers in the local armored tank company, perished in WWII as Japanese prisoners of war during and after the infamous Bataan Death March. While the last of the local prison camp survivors died about five years ago, the memory of the sacrifice of the local soldiers remains very much alive.

Across the street from the courthouse is the site of our former junior high school, a rambling, 85-year-old, three-story, brick affair. Workmen demolished and removed the rubble of the massive structure several years ago and seeded the site in turfgrass. While I disagreed with the decision to tear down the building (letting emotions rather than reason color my feeling), I now concede our school board made the right decision. Our attractive, new, energy-efficient junior high school building boasts technology better suited to prepare local youngsters for our rapidly changing world.

As a plus, homeowners living on streets surrounding the rectangular 7-acre site, now look over the beautiful lawn for stunning views of our courthouse with its ancient functioning clock tower to the north and the city’s towering Catholic church to the west.

Yes, I realize that lawns have their critics. These critics decry the practices we use to maintain them, including our use of chemicals and water in keeping them green and manicured, the emissions and noise produced by our mowers and other equipment.

But, if not turfgrass, what else could we use on our properties that would look as lovely, be as pleasant to walk and play on and still provide so many proven environmental benefits? Concrete? Gravel? Artificial turf? Ground covers, such as pachysandra or myrtle?

None of these choices even comes close to offering an acceptable substitute for turfgrass, my wife and I agreed during our stroll around the courthouse property.

As our tiny city awaits its economic revival, it grows ever greener. The construction of a regional water facility on the outskirts of the community necessitated the removal of the downtown water plant, an aging eyesore. This too gave way for turfgrass and gardens. The same thing is happening with some of the older, vacant homes in our town. Green is replacing boarded up windows and broken down porches. It’s a good thing.

Miss The Smell Of Fresh-Cut Grass? Cub Cadet Has Your Answer 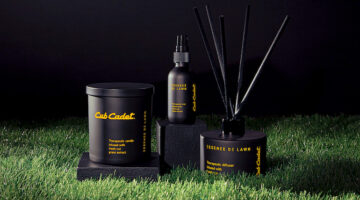