This California property was updated with a large fire pit and circular seating wall.

What will most enhance an outstanding view?

That’s the question an Oceanside, California, couple asked of Landmark Pavers Inc. The company’s answer: A beautiful place from which to enjoy it.

“The client was very much in need of a complete backyard makeover,” says Christine Bristol, Landmark’s marketing director. “They didn’t have much of anything back there, but they had a beautiful view to work with and we wanted to take advantage of that as much as possible.”

At the same time, she says the clients wanted something that would be a gathering spot for their family, as well as for entertaining. Designer Isaiah Ruczewski (who is no longer with the company) responded by creating a circular fire pit area with an arc seating wall.

The property in question is on a ridgeline affording views of the canyon below. The backyard was something of a challenge, Bristol says, with approximately 70 feet along the back of the lot, but only about 30 feet deep. 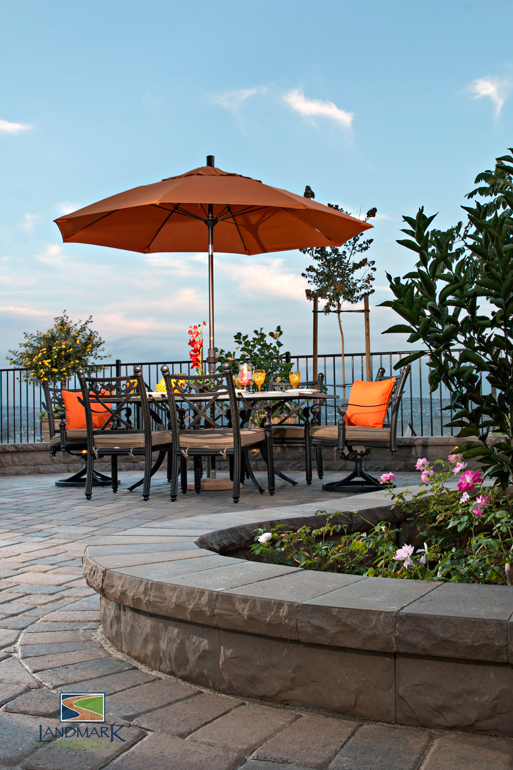 The clients also wanted their hardscape to have the same sort of flow as the distant hills.

“They didn’t want a linear look,” she says. “They wanted a softer look with curves incorporated. That’s why our designer decided on a large, round fire pit with a circular seating wall. Even the curves around the flower beds are undulating in nature.”

The configuration of the space was not the only issue Landmark had to contend with. Bristol says the air-conditioning unit had to be relocated, and because of the elevation within the lot itself, drainage for the backyard had to be installed well beneath the standard depth to have an adequate fall to the street.

“The setback along the side of the house was also really narrow,” says Bristol. “It was a big challenge for our crews to get our equipment in and out of the area.”

The hardscape portion of the project was constructed from a range of products from Belgard.

“This project began with Belgard pavers,” says Bristol. “We used a combination of sizes on it, including some Mega Arbel in three different colors. There were eight different hardscape products, as well as different colors and sizes used to create visual interest.”

She adds that the patio area off to the side is large enough for a grill and a seating area with a table. The clients didn’t choose to install an outdoor kitchen at the time of construction, “but there’s certainly room for it, and they may come back later and do it.”

Lighting the space was also critical, and Bristol says the project includes a mix of wall lights, step lights and path lights. One important feature: wall lights under the caps on the fire pit, which illuminate the pavers around it. 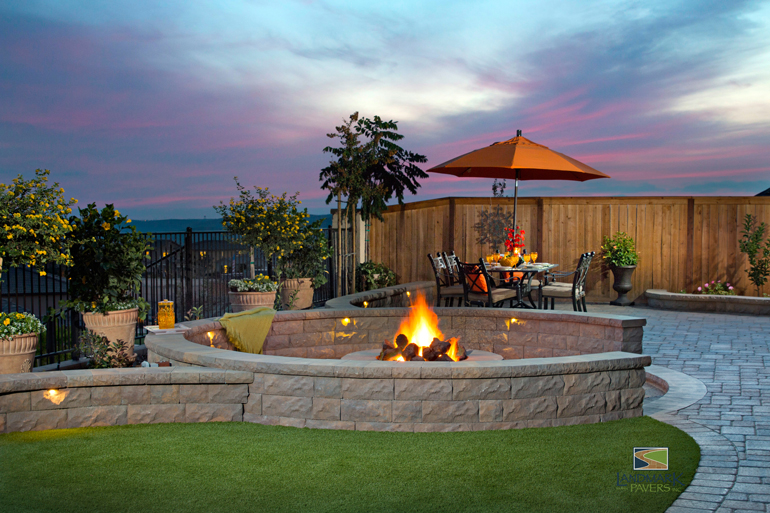 Construction took a little less a month, with a crew ranging from four to six people. The softscape includes artificial turf, the curved flower beds and a minimal number of plantings.

“The clients made their major investment in hardscape,” says Bristol.

The fact that the project was recognized as the winner of Combination of Hardscape Products – Residential – Less than 4,000 square feet at last month’s Hardscape North America (HNA) show has generated a fair amount of pride for the Landmark team.

However, Bristol says as with any project, real pride comes from the pleasure of seeing the client using the project – and in this case she got to see first-hand how much it means to the homeowners.

“When we went out for the photo shoot, she just wanted us to sit down and have a glass of wine with her outside,” says Bristol. “She was just so excited to be enjoying that space. What makes us happy is that they’re happy.”