Home » Design, Build & Installation » Story Of A Landscape: Opening Up A Small Backyard

Story Of A Landscape: Opening Up A Small Backyard

Say the words “Georgia” and “backyard landscaping” and the first images that come to mind are likely the formal gardens of another century.

John Newman, owner of Hampton, Georgia-based Classic Landscapes, Inc., turned that stereotype on its head with a project he calls “Cozy Contemporary Fire and Water,” and contemporary is definitely the style as the project incorporates large concrete steppers in a random pattern, a concrete fire table and plenty of linear design.

Certainly, the way Classic Landscapes got the job is a bit old-fashioned. The company still does a bit of print advertising, and the owners gave them a call.

“They had a space that was just unusable,” Newman explains. “They’re really outdoors-type people who like their garden and like to cook with herbs, but the original owners had planted some privacy screenings that blocked everything and the grass wouldn’t grow because there was too much shade.”

At the same time, he says they had some very definite things they wanted to see in their new landscape.

“They had a deck that was very small,” he says. “They like to entertain but the deck would only hold about four people with some furniture. The wanted a place to grow herbs, they wanted a water feature and the fire table, along with lighting.” 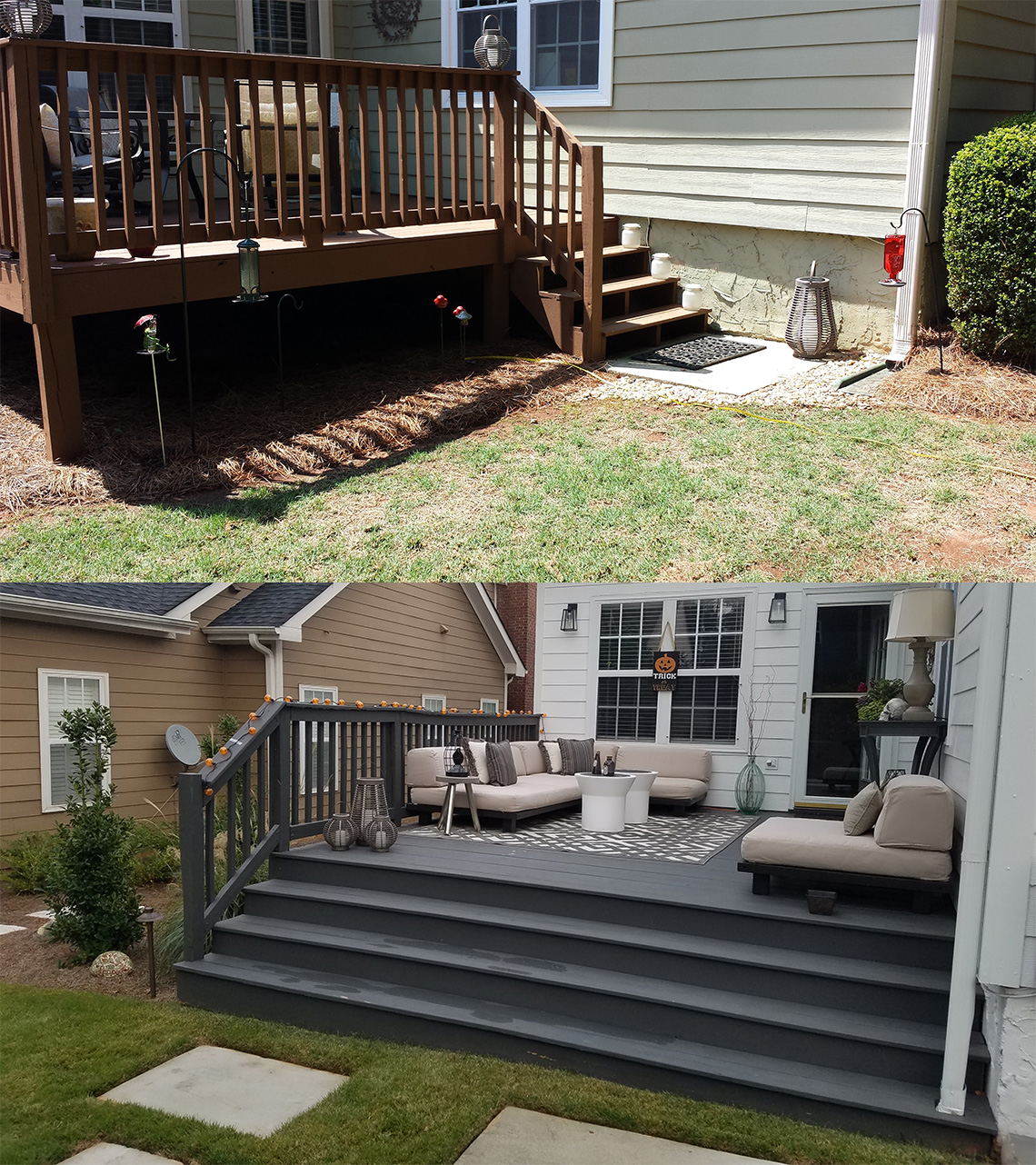 The first things to go were six or seven Leyland cypress evergreens that had been planted above the backyard retaining wall. Newman says they had grown so large it was like being shaded by a three-story building.

“There was privacy, but they were badly out of scale for the space,” he says. “The owners were concerned if we used equipment to take the trees out it would affect the wall from the weight, but it didn’t.”

That still left several crape myrtles in the space, and Newman added some smaller evergreens and a Japanese maple.

“It’s not necessarily a screening tree, but as it gets larger it will block some views in the summer,” he says. “We just don’t want things to get huge and out-of-scale again.”

Another important step was expanding the deck. Newman says the project about doubled the space by expanding it to the back façade of the house. He also opened up the space by running the steps across the entire open end and removing the handrail.

“When you have such a small yard you want to do everything you can to help create an open feel,” he says. “That was a key element to adding that extension onto the deck.”

Rather than change products or rebuild the existing deck, the addition is made of construction-grade lumber and the entire deck was painted.

At the bottom of the deck steps is one of the features that helps give the project such a contemporary feel. Several concrete steppers in a variety of sizes are set in the grass between the deck and the backyard seating area. 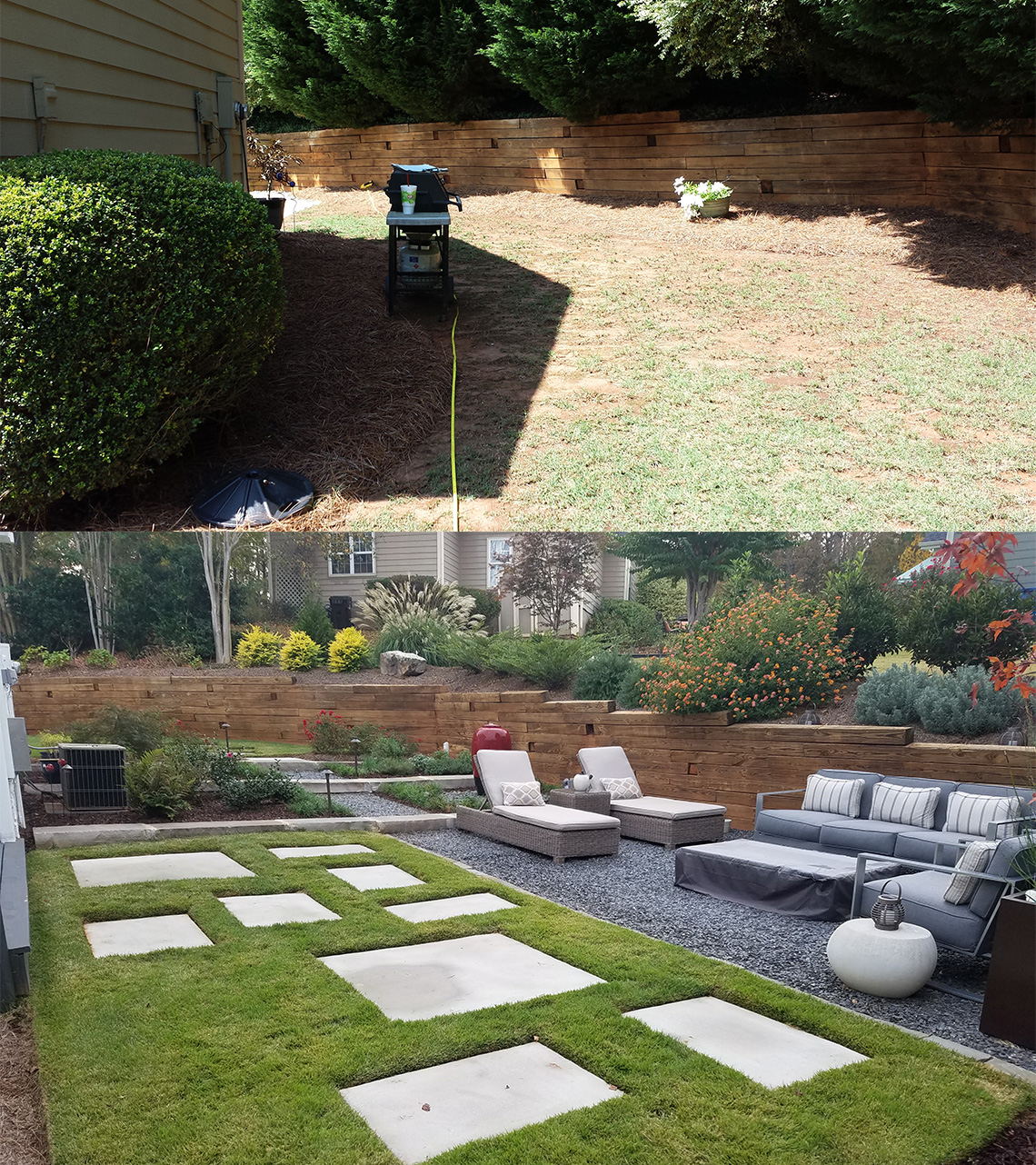 “We didn’t want it to look like a country garden with stepping stones of the same size,” he explains. “We felt this lent a contemporary look. It’s nothing fancy.”

The seating area features a mix of outdoor furniture selected by the owners and the custom fire table, all set on a base of mini slate chips. Newman says their use was predicated mainly on their color.

“It’s a flat gravel, so it’s not like pea gravel or sand where you think you’re going to sink down,” he says. “It compresses well, and it provides a more-refined look without spending money on something like bluestone.”

The installation of the fire table required a specialty contractor who helped bring natural gas to the site. Newman says it’s really a simple setup, but the flames coming up through the glass aggregate provide an interesting look, and the linear look complements the rest of the design and especially the concrete steppers. 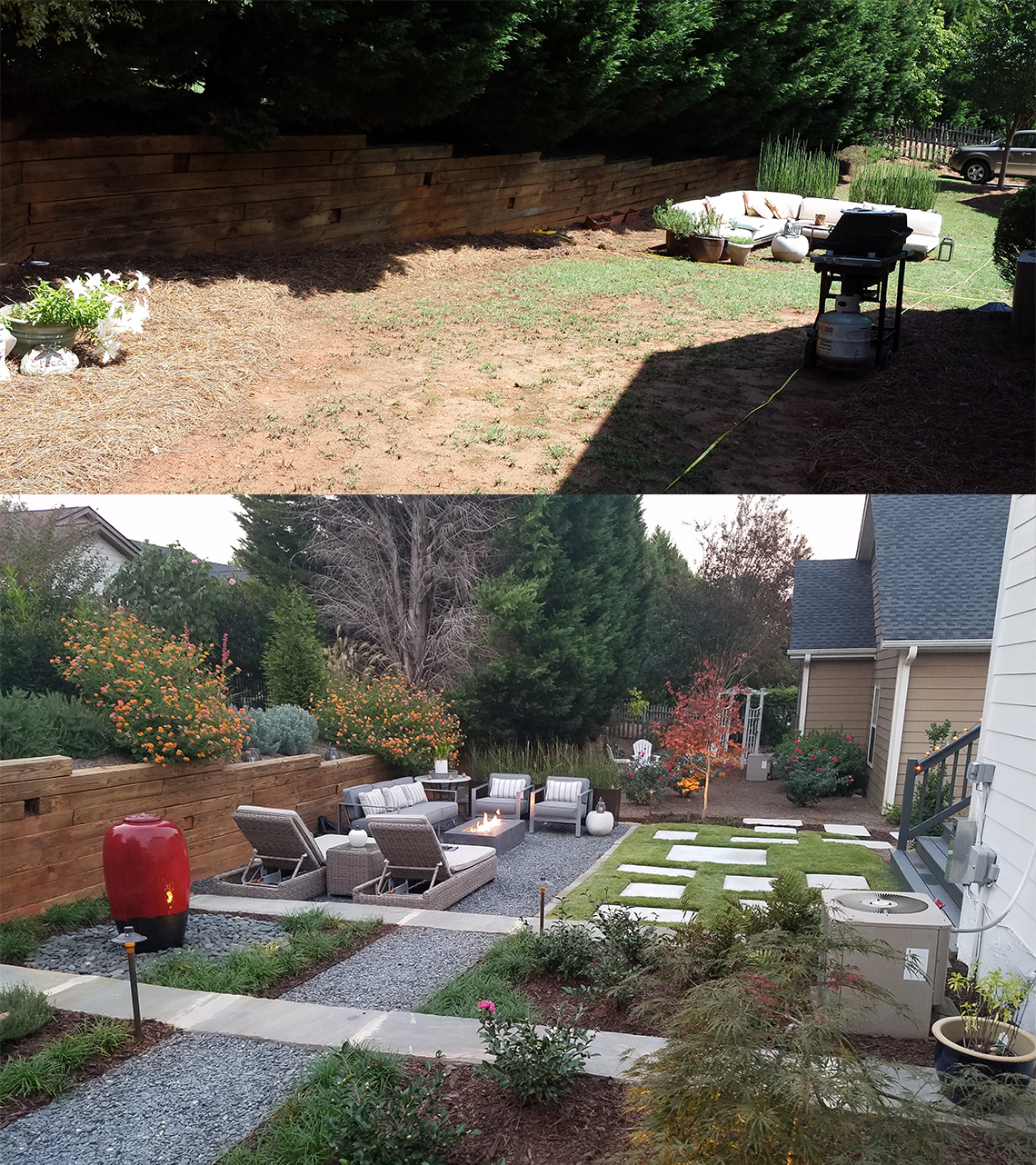 The same can be said for the 6-inch thick mini stone slabs that are used at 10-foot intervals across the backyard to disguise the fact that there is a slight elevation change in the main backyard. Newman says that’s his favorite feature.

“It’s a different use of them,” he says. “Typically, we used those in sequence, like a boulder staircase. Here, you don’t feel like there’s a slope; you’re just moving across this space.”

The water feature is a recirculating urn fountain seated in gray Mexican beach pebbles that match the color of the mini slate chips. Newman says it’s one of the yard’s centerpieces, and a real eye-catcher for people walking into the yard.

“This is a really good small space setup because you see the water and hear the water,” Newman says. “There certainly wasn’t space for a big fountain, and this is a nice, low-key trickle sound.”

Adjoining the urn fountain is the clients’ herb garden. The remainder of the backyard plant palette is strictly ornamental and includes Sunshine Ligustrums, which Newman describes as “very attention-grabbing.”

Along with some ornamental grasses, the space also includes some Miss Huff’s Hardy Lantana, which he chose for its ability to attract butterflies and multi-colored blooms, a couple Japanese maples with purple leaves, dwarf azaleas, creeping phlox and a bit of lavender.

“We went out on a limb with the lavender,” he says. “It normally doesn’t do well in Georgia, but the clients really wanted is so we said we’ll put one in, but it’s done really well.”

Although Classic Landscapes didn’t need to do much to the backyard’s drainage, the company did install new drip irrigation, which Newman says really isn’t standard for his area yet, but is his personal preference.

“About 10 years ago we decided we wanted to be more conservation-minded,” he says.

The same could be said for the project’s lighting, which is all low-voltage LEDs. 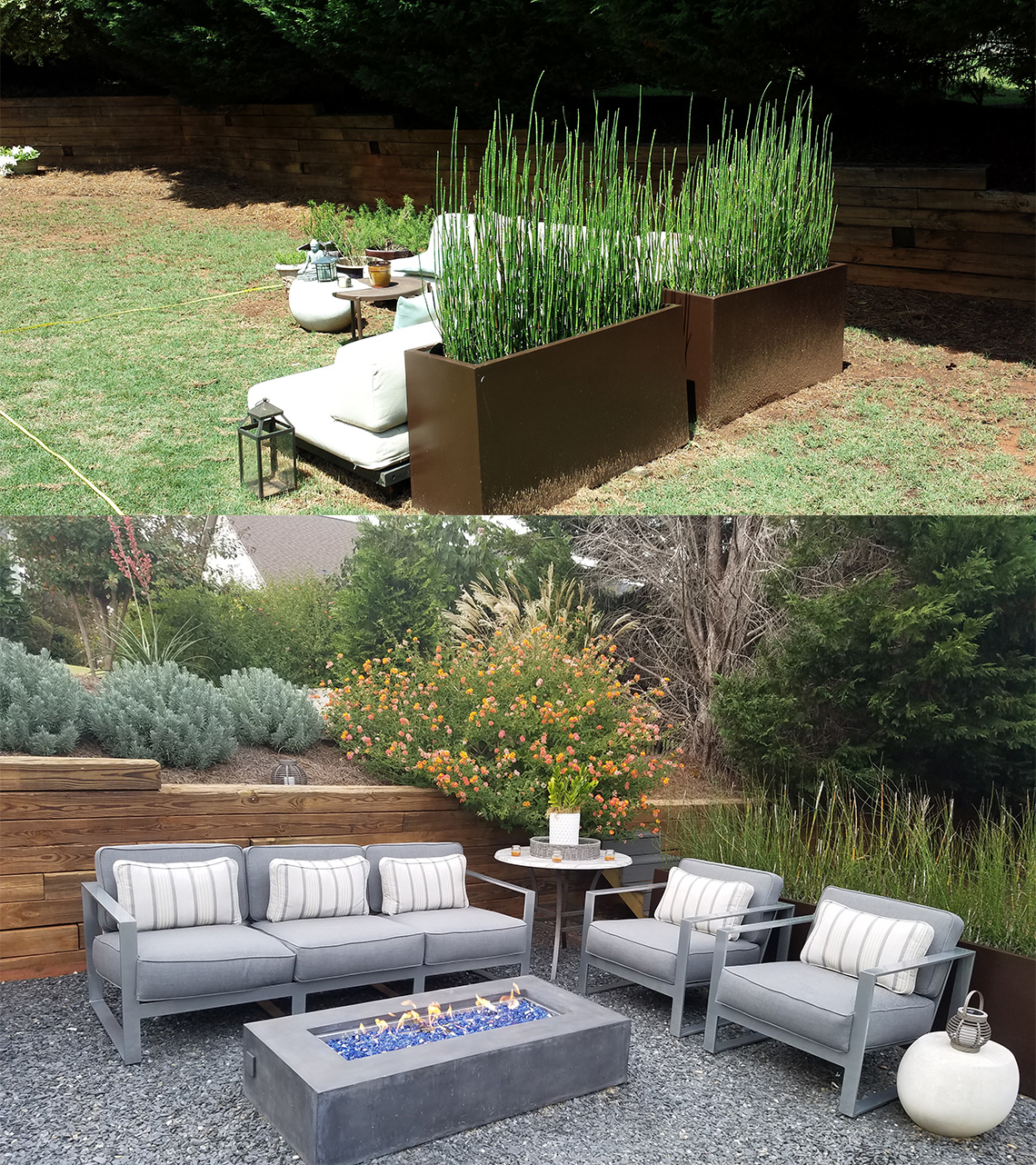 “We put some above the retaining wall on the existing crape myrtles, because they’re multi-trunked and it looks really cool at night to have those trunks up-lit,” Newman says. “A lot of it is area ground-lighting to make the area feel safe at night without turning on the outside lights on the house.”

Although the job took only about a month, Newman says his biggest challenge was coordinating the subs he brought in for different phases of the project, including the tree removal, extension of the gas line, electrical and carpentry work and pouring of the concrete steppers.

“Coordinating all those people can sometimes be a challenge, especially in a small space,” he says. “We had to communicate really, really well to make sure nobody stepped on anybody’s toes.”

While Newman and Classic Landscapes were recognized by the Georgia Urban Ag Council for a design/build/install project of less than $50,000, Newman says he’s most proud of having given the clients a design not often seen in the Atlanta suburbs.

And, of course, it also meets their needs.

“We made it flow with what their goals were and at the same time not make it look weird,” Newman says. “The house is not necessarily contemporary, so it’s a surprise when you come around the side and see this linear contemporary landscape that the homeowners enjoy and use a lot.”

However, he says he did learn one important lesson about creating a linear landscape, and that’s to make sure everything truly is linear.

“Even if it’s masonry, you must make sure it lines up really, well,” he concludes. “It’s not free-flowing. The lines should be straight, and to do that you should look at it in different ways, then double-check yourself as you go along.”