Story of a Landscape: A Lakeside Permeable Paver Driveway

Stumpf Creative Landscaping, Inc. had to find a creative way to design a paver driveway near a lake in Wisconsin.

When is a driveway more than a driveway? When its permeable paver surface is just the first step in a rock reservoir designed to not only hold runoff, but also filter it before sending it back into Lake Winnebago in Menasha, Wisconsin.

And, when it’s a 2015 award-winner from Hardscape North America, of course.

At first glance, the 1,150-square-foot driveway Stumpf Creative Landscaping, Inc., installed at a residence on Firelane Road adjacent to the lake seems fairly ordinary. However, it’s special enough to have earned plaudits from HNA in the category of Concrete Paver – Permeable – Residential, and kept state and county regulators at bay, as well.

Dan Stumpf, Jr., who designed the project and supervised its installation, says the driveway was the main hardscape component, but actually only one part of lot-wide improvements the company made to the property.

Stumpf got the job based strictly on recommendations. Not only were the clients friends of a friend’s parents, but the friend – a CPA – was also doing work for the couple.

“They said, ‘Who would you have do it?’ and Chad suggested they call me,” Stumpf explains. “The builder and excavator recommended us because we’ve done work for both of them, too.”

Hanging over the project was a requirement by the Wisconsin Department of Natural Resources (DNR) that no runoff could exit the property, either onto adjacent lots or directly into Lake Winnebago.

Although it is a state regulation, Stumpf says the agency’s involvement was pretty minimal. The county really oversaw the enforcement of the regulation – a regulation the contractor says he has no problem with.

“They wanted to make sure we weren’t slamming something in there and creating a water issue,” he says. “We didn’t want to see a water issue come into the scenario. We wanted to correct any problems as we got closer to doing the job so we could show them this is what we’ve done and this is how we’re taking care of it.” 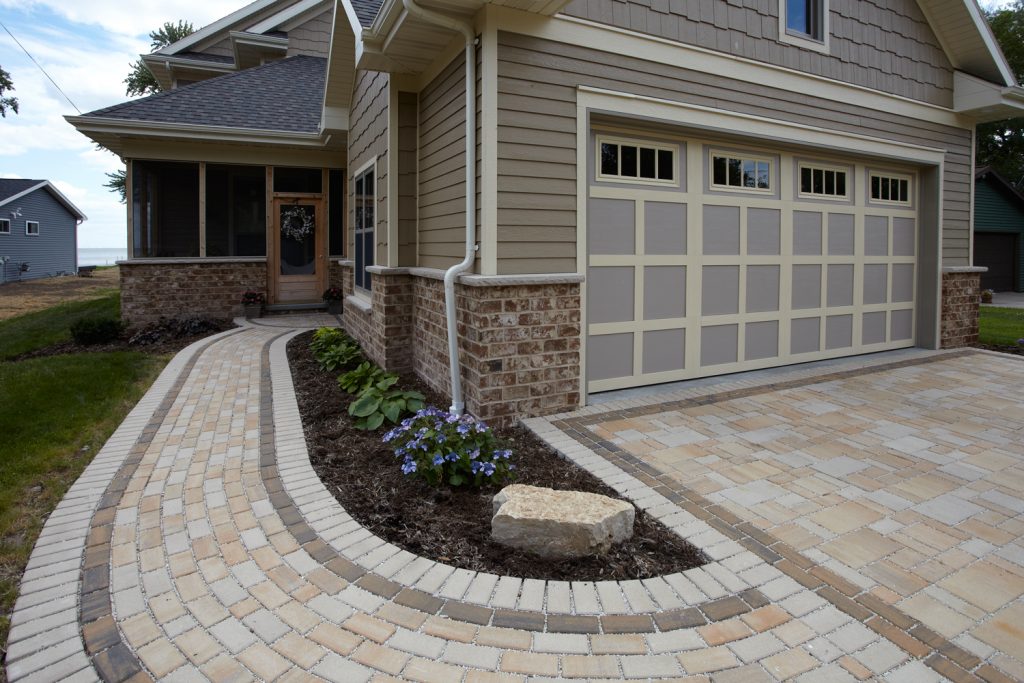 And, Stumpf adds, there were several different directions the project could have taken to account for the property’s lakeside location and high water table.

“They had to have a pervious area, and it could have been a patio or a garden area,” he says. “They decided to let the driveway area act as a reservoir to hold the water and eventually drain it out slowly.”

Stumpf offered several different options, including a pervious blacktop asphalt and pervious concrete, as well as the pavers.

“You don’t hear too much about the asphalt,” Stumpf observes. “It’s out there, but we would have had to have waited to do it. I showed them photos of the concrete and how it was honeycombed, and in one place the concrete had already been torn out because it was so beat up.”

He then suggested doing a pervious installation of a brick product, which was a little more expensive, but offered a choice of colors and designs. Stumpf also explains that if there is ever a problem, the pavers could be removed, the base repaired and the pavers reinstalled.

Ultimately, Stumpf and the clients went to the County Materials Corp., an outlet in Appleton, and selected the company’s H2O Pro Paver for the job. He says the product selection was one of the biggest challenges the job offered.

Installing the project required the driveway be excavated to a depth of 30 inches and then filled with several layers of clean stone in different sizes.

“We started with a 3- to 4-inch layer and then a 1- to 2-inch layer to provide a filtration system,” he says. “The different layers also act as the reservoir. Everything is getting filtered on the way through, and then drain tiles were installed and run to the lake so that if the reservoir gets to a certain height, the pipe system will take some of the water out. It still has a place to run but it goes out at a slower pace.”

Work on the driveway took approximately a week, and cost in the neighborhood of $16,000.

While Stumpf’s crew was on-site, they also addressed some other drainage issues on the property, mainly to keep runoff from moving onto the adjoining lots.

“We also cleaned up a little bit of the shoreline and made the lake a little more visible from the house,” he says. “They’re also older and they didn’t want a ton of landscaping to take care of, so we did a few things to dress up the house – just enough to set things off for them.” 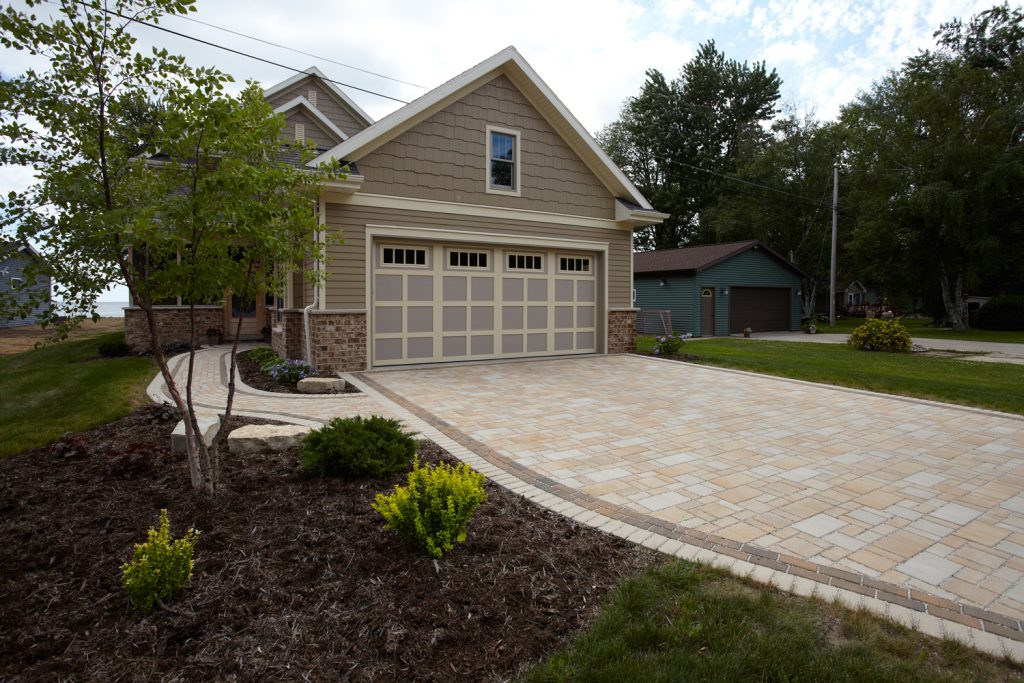 Now that the project has had a chance to mature a bit, Stumpf says he’s proud of how everything came together.

“I second-guessed the colors at first, the black and the brown, as well as the pattern until we got it down and I saw it,” he says. “I was floored by the overall look of the colors. And then, after the first year of the project, how great the lawn looked and how it worked with everything else. It all came together nicely.”

Stumpf checks on the project from time to time to make sure there’s enough pea gravel in the joints. He’s also picked up a couple other jobs in the area installing patios with gravel reservoirs under them. However, he says he sees the idea slowly gaining interest among commercial property owners, as well.

“It’s not taking right off with residential, and I don’t think it’s going to because the cost of it is greater than what a normal patio would be,” he concludes. “With commercial projects, it’s a little different. They have to contain their runoff water on-site, and by putting in a reservoir like this, they’re not eating up so many square feet with a retention basin; they’re getting parking.”

Previous post 4 DIY Trends to Pay Attention to This Year