This story begins like so many others do: the clients contacted South Windsor, Connecticut-based Bahler Brothers, Inc., about building a patio. There was an existing plan, designed by another landscaper. Oh, and the plan called for building the patio on an existing retaining wall system.

Things got much more complicated when designer Jen Kloter and her boss, Tom Bahler, went out to the site to take a look.

“As we started walking the site, Tom realized the existing walls were failing,” says Kloter. “This house was new to this couple, but the walls had been built 12 years prior when the house was built and had never been finished. They did not put a cap on it and just left bare gravel behind it.

“The closer we were looking at their walls, we realized we couldn’t really build the patio in good conscience knowing the wall was going to come down eventually,” she adds.

Further complicating matters (Kloter calls it one of the biggest challenges on the project), the family was living in London at the time. She says they might have met face-to-face three times during the entire design and construction process.

Kloter says the recommendation to replace the existing retaining walls wasn’t an easy one for the firm to make — the cost would easily double what had already become a $100,000+ project — or for the clients to hear. The homeowners hired an independent structural engineer to evaluate the wall. 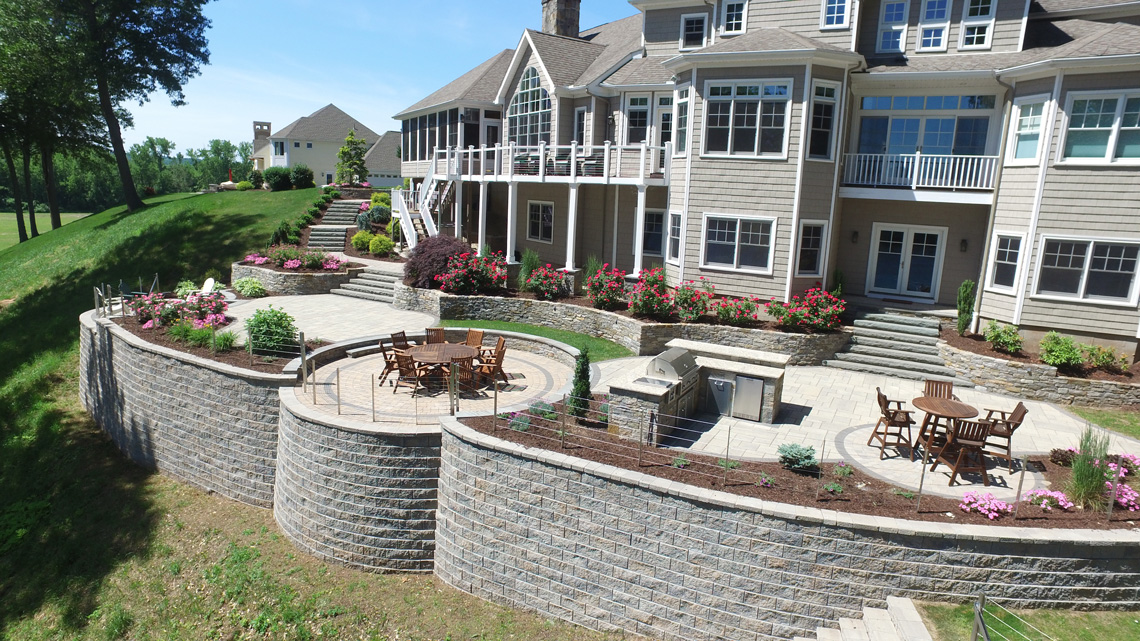 His report was a mixed blessing. While he agreed that the wall was breaking apart and needed to be replaced, he recommended digging down below the frost line and installing a poured-in-place concrete replacement.

Kloter says her response was, “How ugly can you get.” She also recognized that a properly engineered wall didn’t have to be big or ugly. However, it could expand the scope of that backyard patio.

“At that point, we were completely obliterating the other design,” she says. “We weren’t confined to the lines of the existing walls and those lines really didn’t represent how they wanted to use the project.”

Still, the challenge of the site was that whatever area the project could contain by a large retaining wall would become the clients’ backyard. Because of its location on the bank of the Connecticut River, the slope fell away almost immediately and steeply from the back of the house, and only got steeper further down the hill.

“What we had to do was get creative and balance the wall height to the distance from the house to maximize how much space they could gain and still be safe,” Kloter explains. “What we ended up doing was coming off the house just a few feet, dropping a three-foot wall to get the patio down as far as we could and slightly decreasing the size of the big wall.”

And, when she calls it a “big wall” she isn’t kidding. In the end, the wall height measured almost 15 feet, with the bottom two feet of that underground. Bahler Brothers keeps an engineering company on retainer, and even so, it took 10 months to complete the specs for that part of the job.

“The engineering company actually hired a Geotech engineer as a sub to come in and drill some cores to get down to bedrock and get samples of what the full horizon was,” Kloter says.

The time might have even been longer is the client hadn’t been active in researching and gathering information for the various governmental requirements and permits needed because of the site’s location on the river.

In the end, the company opted to build the big wall out of Techo-Bloc’s Suprema wall blocks. Kloter says the precision cut of the blocks, plus their overall construction made it an easy choice. However, getting the old wall out and the new one in was not easy.

“We had to remove the existing retaining wall while we were sitting on the patio above it,” she says. “It was all rather precarious. We had no less than four site visits with the foreman as he was planning how he was going to go about doing it.”

Fortunately, much of the old geogrid was still in place to help hold the hillside. Work began on the big wall about a year after the clients first contacted Bahler Brothers and took approximately eight weeks to complete.

To access the site, the company also had to build a gravel roadway across the front lawn and around the right side of the house that was used throughout the entire project.

For the patio, Kloter designed a series of four different spaces on three different levels.

“The intent was that each level would have its own function, and to break up that mass of square footage, so the whole thing wasn’t all hardscape,” she says. “We wanted some landscaping in there, to soften it.”

The different spaces include a gas fire pit, a sunken dining area, and then the kitchen area with a raised bar with a granite countertop, a grill, and a built-in ice-chest, and then another seating/eating area. 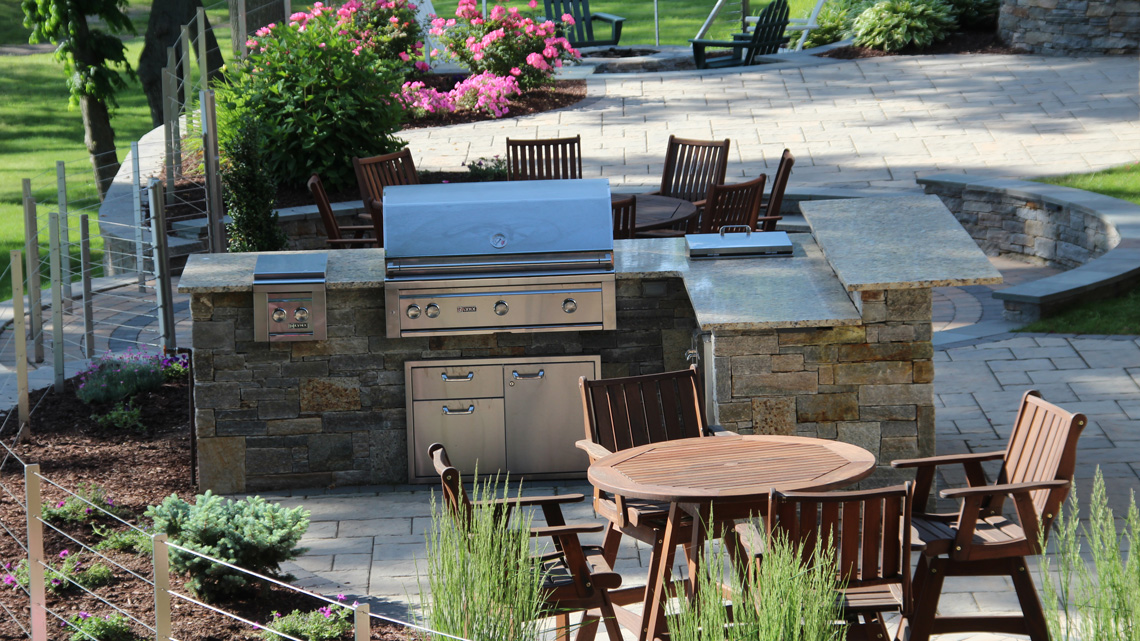 The patio is all Techo-Bloc pavers and slabs, and the steps, including a set leading down the hill and around the big wall, are bluestone. However, the three-foot wall closest to the house and the outdoor kitchen are of natural stone and were installed by a stone mason sub.

Again, excavation had to be done carefully, and Bahler Brothers did some reinforcing of the deck piers.

Also, drainage was a major concern. Kloter says one of the stipulations from the engineer was that all water above the big wall had to be collected and redirected around the patio.”

“We have conduit under the patio for electrical, for low-voltage lighting, for irrigation and for gas,” she says. “And, then there’s all the drainage. All the downspouts from across the back of the house had to be collected, as well as all the water off the patio.”

Kloter described the lighting for the project as “pretty subtle” and says there are a lot of wall lights, including in a seating wall around the sunken dining area, under-cap lights and a few path lights.

To protect the patio-users from the 13-foot drop-off, the company also installed a stainless-steel cable railing system from Nature’s View Railing.

“The view from the property and from the patio is so gorgeous, they didn’t want any fencing to obstruct that view,” Kloter says. “We needed to find a solution, and Nature’s View basically hand-makes all the components of this fence.”

And, to further protect the wall, on the advice of the engineer, each fence post sits on a separate conduit from Surefoot Footings so no additional pressure is placed on the wall.

The bulk of construction on the patio took place the spring following the installation of the big wall and involved a great deal of logistics between Bahler Brothers and the stone mason.

“Because of the location of our road, we had to start at the side of the patio by the gas fire pit and work our way out,” Kloter explains. “We would alternate weeks with the stone mason. We’d go in and put in the base for the patio, then he’d come in and build the wall, then we’d go in and build the next section of patio. It went back-and-forth like that for three months.” 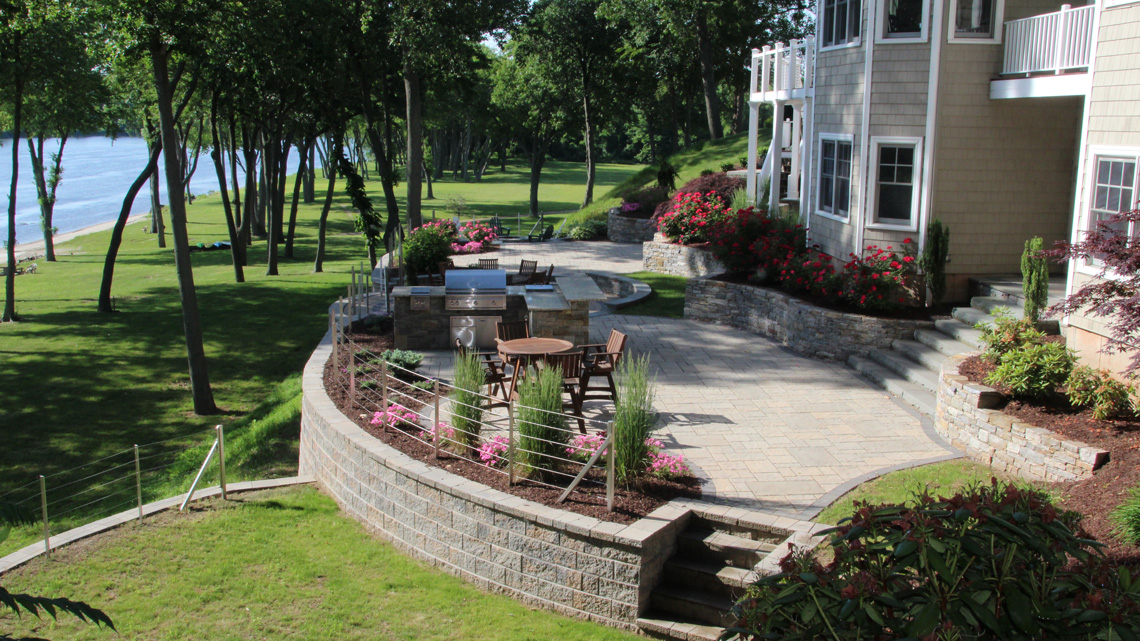 Even then, with the job approaching the $300,000 range, some of the work Kloter designed was left undone. For instance, the softscape, which includes a heavy use of Knock Out Roses (which she recommended for their summer-long color), was installed by another landscape company some 18 months after Bahler Brothers completed the hardscape.

Also, still on the table are a swim-spa area on the hill beyond the patio, and a pergola over the sunken dining area. Even so, Kloter says the dining area is her favorite feature of the project.

“Actually, I just love the way the lines came out on the patio, and the way the whole thing flows together,” she says. “The kitchen is really cool, and the pergola would have set off the dining area because of the shade overhead and a little more lighting.”

Kloter and Bahler Brothers were recognized with an honorable mention in the category of segmental retaining walls for a residential project by Hardscape North America back in October, and Kloter admits the entire project was a challenge from start to finish, with logistics playing a big role in that.

“I can draw pretty lines on paper, but the logistics of physically getting it built, that was the challenge,” she says.

Fortunately, she says, she learned the rest of the Bahler Brothers’ team is up to the task, bringing the project in under-hours.

“We put our crews through the wringer on this project and they stepped up and did a fabulous job,” Kloter concludes. “As I said, our foreman was out on the jobsite weeks before he started the project, thinking about it. And, even in the design phase, I was talking to him regularly, bouncing ideas off him on best practices for making his job easier. It was a huge help.”

Tags: landscape lightingStory of a Landscape

Next post 7 Ways To Stay Competitive In The Labor Market 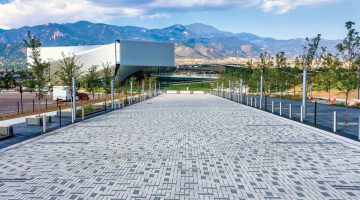