The Strong Case for Core Aeration

Embrace this service to produce healthier turf for clients and also boost your bottom line. 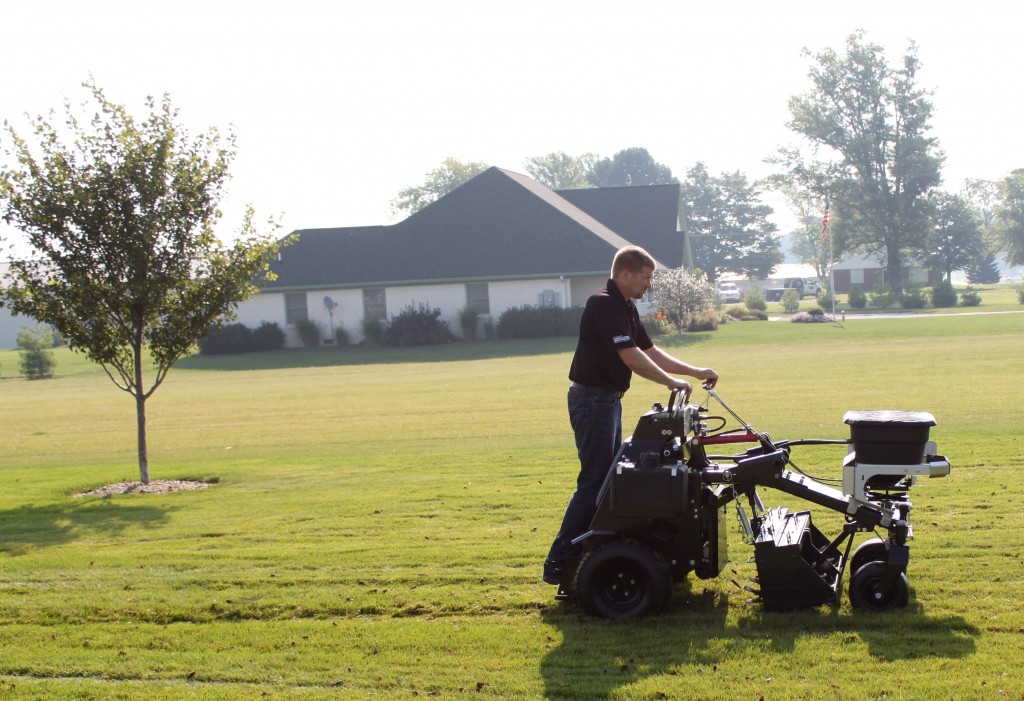 Lawn care pros can boost their revenues while also improving customers’ lawns by offering turfgrass aeration. It’s not a particularly difficult service to add to an existing turf care program, and the aeration equipment best suited for professional use on residential properties isn’t a major capital expense. Even so, experienced lawn care pros know aeration isn’t as simple as buying a unit and poking holes and pulling cores — not by a longshot.

Performed incorrectly or at the wrong time, such as during an extended drought, aeration can damage turgrass. Obviously, if the lawn is rock hard and the aeration unit does not penetrate the soil to a sufficient depth, the service offers few benefits to a customer’s lawn.

Obviously, there’s also the issue of the unsightly cores that are created by aeration. Some property owners don’t want to see them on the lawn — to even though the cores break down within a week or two. In those cases, it might be necessary to drag a property and break up the cores after aeration. That has to be taken into account when promoting the service.

Aeration is a specialized service with its own unique set of pricing and selling challenges. And, yes, it has to be sold. Property owners rarely come to a service provider and ask for it. Lawn care pros offering aeration generally provide customers with reminders via mailers and e-newsletters, and education pieces along with their invoices. And, turf aeration, like all lawn services, has its own seasonality.

“For us, core aeration fits best during the fall,” says Larry Ginger, founder and owner of American Lawn, Des Moines, Iowa. “During the spring we’re extremely busy doing other things. Also, Iowa State University recommends aeration during the fall months, for the most part.”

Fall, of course, is when grasses, such as Kentucky bluegrass, perennial ryegrass and tall fescue, are recovering from the summer’s heat and beginning to grow more vigorously. That’s when they’re building root mass and storing carbohydrates prior to going into winter dormancy. Fall is also the time when lawn and grounds pros provide fertilization, overseeding and winter weed control. These practices prepare cool-season turfgrasses for an earlier spring greenup and a thicker start (especially Kentucky bluegrasses with their spreading rhizomes) when they emerge from dormancy the following spring.

Aerating at this time provides the plants’ roots, which are actively growing, better access to air, water and nutrients. The next best time to aerate is spring, but lawn and grounds care pros are so busy then, it’s often difficult to fit aerations into their schedules.

The best time to pull cores on southern lawns with warm-season grasses is mid-spring to early summer. This gives the grass a chance to recuperate as it goes into its primary growing season. And yes, even turfgrass growing in sandy soils, especially those growing in compacted sandy soils, benefit from aeration. The process of mechanically removing small plugs of thatch and soil from the lawn is commonly called core aeration. This is different than other soil cultivation practices, such as spiking and slicing. Core aeration: 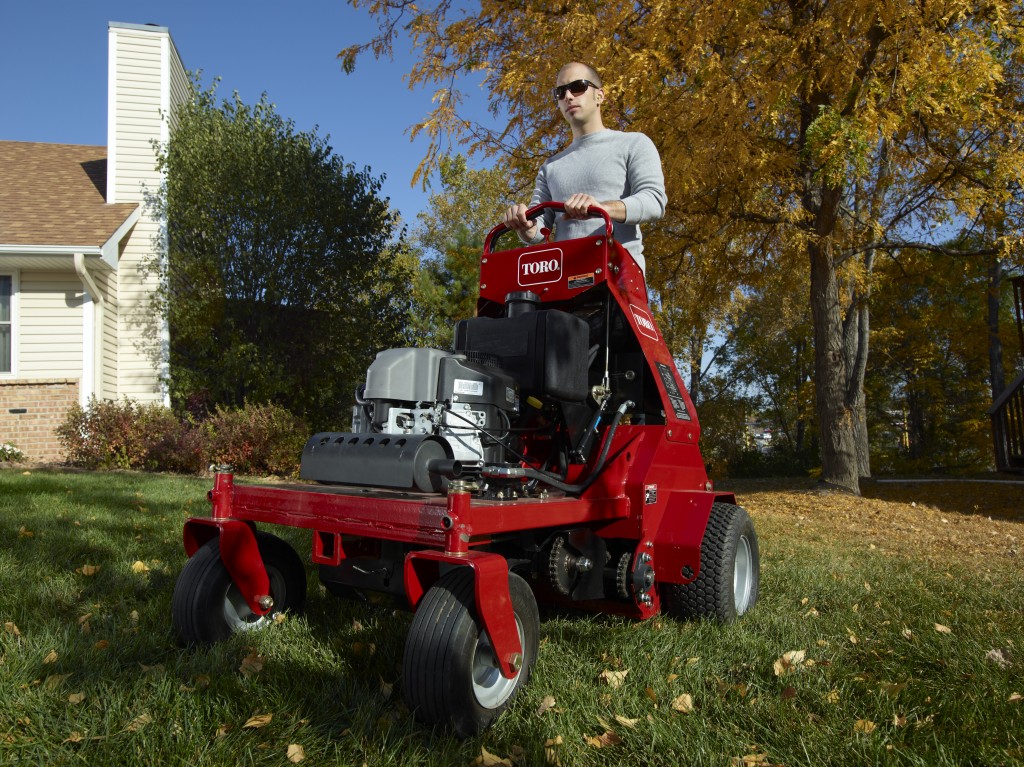 Obviously, conditions such as soil compaction, thatch buildup, turfgrass health, soil moisture and soil types determine how aggressively a particular lawn should be aerated, if at all. That said, it would be difficult to pull too many cores on turfgrass growing on badly compacted clay soils. Often, these are the soils that lawn pros contend with in newer subdivisions.

Lawn and grounds professionals have a rich variety of aeration equipment in terms of size and coring capacity: walk-behind, ride-on, tractor-mounted and aerators that are pulled behind tractors. These include simple, small units that require just a lawn tractor to pull them to powerful PTO-powered machines that require a 65 hp tractor and shatter the soil or pull cores in a swath of more than 100 inches per pass.

Smaller aerators, with some units small enough to fit through gates, are more appropriate for residential properties. Very large tractor-driven coring units are used mostly on golf courses and sports fields. Some ride-on and mid-sized units can be (and often are) used for both purposes.

Ginger says that his residential customers are more receptive to aeration than his commercial clients.

“We never push or upsell anybody, but when we see a property that truly needs core aeration, we strongly suggest it, especially patchy and/or compacted lawns,” says Ginger. “Oftentimes, homeowners will overseed right after we aerate their lawn. ISU’s favorite method of seeding still involves overseeding and then making multiple passes with a core aerator.”

American Lawn technicians have the choice of several different units depending on what they’ll be aerating on any given day.

The company’s oldest unit is a small 22-year-old Ryan walk-behind now on its fourth engine. It keeps chugging along. “My guys like it, it’s small and nimble,” says Ginger. Technicians fire up a Ryan 48-inch (36-inch effective) tow-behind unit for larger properties. They pull it behind a John Deere 22 hp garden tractor.

But the company’s most popular unit is its new Turfco XT5. “We use the XT5 on every seeding job,” says Ginger. “With its hydrostatic transmission, it’s extremely easy to operate, and we haven’t found a faster hydro.”

Chris Shipp, owner of Shipp Shape Lawn Service, Sylvester, Ga., has been providing lawn services for 35 years, 20 for his own company, serving residential and commercial clients in Georgia’s “peanut country”. For the past 10 years he’s also maintained a sizable municipal account that requires him to aerate several sports fields.

“I normally aerate in early spring when I apply fertilizer,” says Shipp. “I’ve found that if I do both of them at the same time I don’t have to use as much fertilizer. The fertilizer gets down into the soil to the plant roots and you don’t lose as much to runoff and other factors.”

But not all of his aeration is done in the spring. He does some in the fall, too, when he treats lawns for winter weed control.

Shipp says that because a program of regular aeration removes thatch and thickens turfgrass, it reduces the presence of weeds and lessens disease pressure, again cutting down on the use of lawn chemicals.

Shipp favors a front-mount 928D-Series Grasshopper diesel tractor equipped with a 5-foot-wide AERA-vator to knock out his company’s aeration jobs. He likes the Grasshopper unit because of the power that its diesel engine delivers and because it can be used with a variety of different landscape attachments in addition to mowing.

One of the biggest challenges for individuals just getting into aeration is pricing. If the service is not priced correctly, and special considerations, such as obstructions and slopes, are not factored into the price, aeration can be a world of work for little financial return. Common obstructions include trees, shrubs and children’s play equipment to name a few. Be especially vigilant of sprinkler heads.

Ginger takes into account the size of the property, how difficult it will be to aerate and which unit will do the job most efficiently. He says his technicians will not aerate sections of lawns they deem too dangerous or too steep. Also, they make sure lawns are irrigated before they aerate them, and that sprinkler heads are marked.

Many lawn pros set a minimum fee to aerate residential properties (what one contractor describes as his “just-getting-it-off-the trailer” fee) and goes up from there based on the size and difficulty of servicing the property. In most cases the charge is three to four times what it would cost to mow the property.