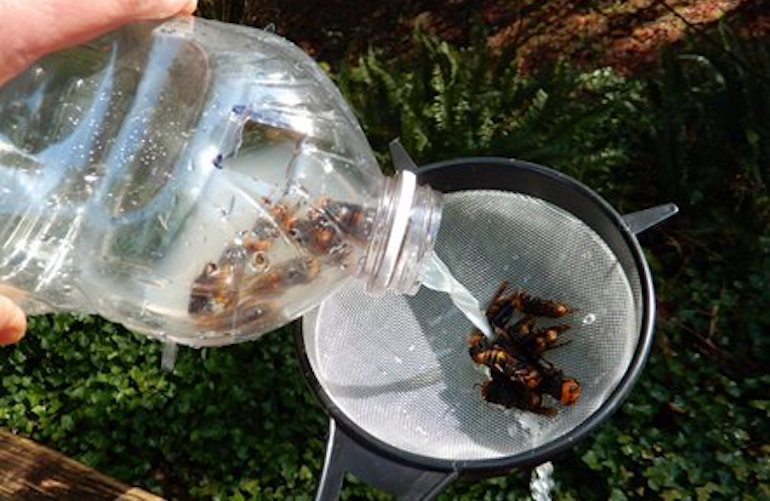 Specimens from a trap are emptied into a strainer. This is the same method used in Nagoya, Japan.

Read about Asian giant “murder hornets?” Want to stop their spread? Live in Washington state? The Washington State Department of Agriculture (WSDA) is looking for volunteers within the state to participate in helping trap Asian giant hornets starting in July. The insects, which have made headlines across the US as murder hornets, are a serious threat to honeybees, other insects, and even humans. If it becomes established, this hornet will have negative impacts on the environment, economy, and public health.

Although WSDA invites anyone in Washington to participate in trapping, the agency is particularly interested in volunteer trapping in Whatcom, Skagit, Island, San Juan, Jefferson, and Clallam counties. In December 2019, WSDA received and verified two reports of Asian giant hornet near Blaine. These are the first-ever sighting in the US. Canada had also discovered Asian giant hornet in two locations in British Columbia in the fall of 2019.

By contrast, the WSDA urges those outside of WA state to NOT build traps. There are no known sightings of Asian giant hornets anywhere else in the US and trapping for them outside of WA will likely do more harm than good by catching native desirable insects, according to WSDA. 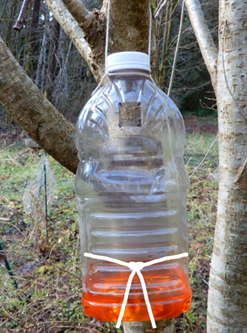 A homemade trap filled with bait is hung from a tree.

In order for trapping to be successful, those who participate should know that trapping is a commitment. It will require you to:

The full, easy-to-follow instructions, from building the bottle trap to preparing your samples, is available in a printable pdf. The trap targets Asian giant hornet workers in the summer and fall and is the same one used by the hornet program in Nagoya, Japan. 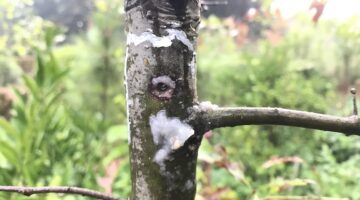