A Year of Tragedy and Rejuvenation

Big John was a good worker, always happy and always willing to step up when things needed to be done at my company. When I needed a safety director he stepped up and took charge, giving weekly safety meetings for the crews. He wasn’t going to win any public speaking awards, but he got the job done.

John had a motorcycle, lived in a trailer and never complained about anything. He was 55 years old and while doing a spring cleanup at one of our HOA’s he suddenly passed away from a massive heart attack. It was the worst day I ever had at work, and meeting his family at the hospital was one of the saddest moments of my life. Big John was about the most likable guy you would ever meet and we all miss his witty yet gruff and outgoing personality.

It has been one year this month since he passed away and a lot has changed in my company since then. Today, I took down his timecard that the guys had put up on the bulletin board in the foreman room, the words “we will miss you Big John” scrawled across the front. It got me to thinking about just what has changed in the past 12 months and why.

Things had to change

The change, it had to come and boy did it ever. Over the last year I have had a major staffing overhaul, changed our mowers and power equipment brand, purged our offices of as much non-essential paperwork as we could, cleaned and renovated our shop, started a major rebranding campaign, closed down a division of the company, changed our time-tracking software, refocused and identified our target customer base, hired new key people, restructured our pricing strategy, fired some customers (not easy but had to be done), became the president of the company and did some soul searching along the way and got our mojo back!

So what about the why? Why did we have to change? We had to. I’m not trying to be a smart aleck here, it just had to be done that’s all. Sometimes it’s just as simple as that, but there are reasons that force the “why”.

In the case of my company, over the past several years there were what I will call mini-events that began to add up to a massive design flaw that became more and more apparent until it couldn’t be ignored anymore.

You may have these mini-events occurring in your organization as well. Maybe it’s an employee who is constantly late and has a bad attitude, but is otherwise a “good worker”. Or it could be the loss of a long-time customer; you know the one who never complained and always paid their bills on time. Perhaps you are noticing small piles of junk lying around your shop or offices, things that need fixed or addressed. It could be that for some reason all of your trucks look like they just went through a stock car race. Get the picture?

Mini-events if not addressed will add up eventually. Left to their own devices they will become larger and multiply. It’s pretty easy to put the blinders on and just let them add up. If you’re only interested in surviving, that’s probably fine. But if you want to thrive and grow then sometimes you have to force the “why” and re-boot. That may mean different things to different companies, but doing the same things over and over again expecting different results will lead you nowhere.

Getting back to Big John, he was the kind of guy that would have embraced the changes we have made this past year. Sometimes it seems to me that it was his passing and the realization that all of us are given a finite amount of time got me to make the changes that we did this past year.

We all wish he were still with us. He would be a key player in our stronger and more focused company. We all miss and remember him fondly. It’s just too bad that Big John won’t be around for the ride; I know he would have enjoyed it.

The following is one of my favorite quotes about change:

“Here’s to the crazy ones. The misfits. The rebels. The troublemakers. The round pegs in the square holes. The ones who see things differently. They’re not fond of rules. And they have no respect for the status quo. You can quote them, disagree with them, glorify or vilify them. About the only thing you can’t do is to ignore them. Because they change things. They push the human race forward. And while some may see them as the crazy ones, we see genius. Because the people who are crazy enough to think they can change the world, are the ones who do.”

The author is the owner of Southwest Landscape Management, Columbia Station, Ohio, and a partner with his brother, Jeff, in Rak Consulting. Contact him at [email protected]. 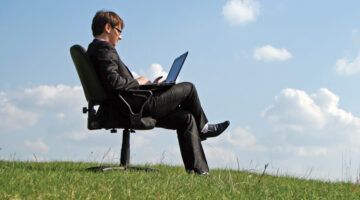