Reviving A River With Landscape Design

There’s something about moose being one of the bigger challenges of a project that signals this isn’t an average landscape job. And, the Blue River Habit and Restoration project carried out in 2017 in Colorado certainly was not ordinary. 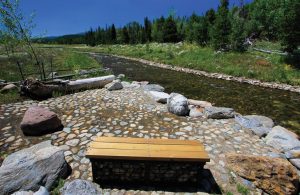 Skiers likely recognize Breckenridge, CO for its world-class peaks, but what the snow covers in the winter doesn’t necessarily look quite as glorious come spring. Located just west of the Continental Divide, this area was originally settled by miners who stripped the land and left piles of rocky waste in their path. Work has been ongoing for more than two decades to clean up the rubble and improve fishing along the Blue River, which drains the area and provides drinking water for the Denver metro area.

In fact, the 2017 version of the river restoration project earned a silver award for the Eagle, CO office of Rocky Mountain Custom Landscapes, Inc. This award was part of the 2018 Awards of Excellence (ACE) for the National Association of Landscape Professionals (NALP).

Brian Wells, Rocky Mountain Custom Landscapes’ construction manager for that segment of the project, says the goal was to create a natural park setting where people can hike along the Blue River north of the Breckenridge central business area and restore a stretch of the river along Coyne Valley Road and Colorado Highway 9.

“We were recommended by (Denver-based) DHM Design, who did the overall design,” says Wells. “We had done some work with them over in the Aspen area. It was a bid process, and there was a total of three bids, but we were awarded the contract.”

Wells adds that weekly meetings between Stephen Ellsperman and Jason Jaynes of DHM and Shannon Smith, who oversaw the project for the Town of Breckenridge, contributed to a very cohesive team that was instrumental in the success of the project.

Hardscape work consisted of three sitting areas with a path going through the project area, and then work on the river itself.

“The path is granite crusher fines—just pulverized granite,” says Wells. “It’s roughly three feet wide and we put it in four inches deep and did some real loose compaction. The idea is the path will erode and go into the ground as people and wildlife choose their own way. But, honestly, that’s going to be years down the road.”

The sitting areas themselves are also a bit atypical. These are embedded cobble areas that are completely permeable. For this project the company utilized river rock from 3″ to 5″ in size—including some from the job site—in a sand-set base.

“It took a bit of experimenting with the rock size so that it compacted right and felt right under your feet,” he says. “It’s a matter of getting the subgrade correct, but once we got that in there and compacted with the sand and fill material, it’s rock solid and looks great.”

The look and performance so far have been good enough that Rocky Mountain Custom Landscapes is now incorporating the embedded cobble hardscape in work for some of its higher-end residential clients as an alternative to flagstone patios.

“You can install it and forget it,” observes Wells. “It maintains itself; it looks fantastic, and the payoff per dollar is extremely high.” 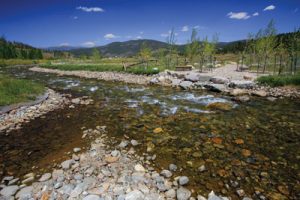 Attracting wildlife to the restored area has been one of the project goals. Moose, elk, and deer have been increasingly seen in the area. Meanwhile, this stretch of the Blue River is an aesthetically and functionally pleasing area for people to enjoy as well. (Photos: Rocky Mountain Custom Landscapes, Inc.)

Work on the river involved grading, excavation, and backfill, although Wells says part of the stretch included areas that are designated as wetlands that were not disturbed.

“We did erosion control along the river itself with wetland plantings and fiber mesh along the edges,” he explains. “We also placed boulders and some deadfall logs to give habitat for the fish because they really want to encourage fly-fishing.”

Because of the condition of the river through the project site, efforts on one bank were made to save plant material and blend it with new plantings. However, the other side had been strip-mined and was barren.

All the plantings are native to the area but required additional effort on the part of Rocky Mountain Custom Landscapes to make them work.

“A lot of it was absolutely rock soil, which had to be top-dressed,” Wells says. “We had 3″ to 4″ of soil that was top-dressed in a lot of the areas.”

While a lot of the plantings were immature, the project did incorporate some evergreens in the eight-foot range.

Somewhat surprisingly, the project area also includes a 24-zone irrigation system that delivers 55 gallons-per-minute. Wells explains the decision to irrigate was based on 2017 being at the tail end of a drought in the area. There was the desire to get what he describes as a substantial amount of seeding on top of the plant material to germinate, as well as maintain the trees and plant material the next time a drought occurs.

“In 2017 we watered it pretty heavily, but toward the end of that season we started scaling back,” he says. “Last season we had it down to two days a week, and we’ll see how it goes this year based on snow and moisture. I’d anticipate maybe two days a week, although it took off and established pretty well.”

More than drought conditions impacted the project. At 9,600 feet in elevation, Breckenridge has a short construction season.

As it was Rocky Mountain Custom Landscapes spent four months on the site in 2017 and an additional two months in 2018.

It’s the plantings that ultimately created one of the biggest challenges on the project, though. Wells says the moose, elk, and deer who use the area and will eventually help create the paths through it, viewed the new greenery as—in his words—“gourmet salad,” and figuring out how to keep the plantings in the ground generated some head-scratching.

Work on a segment of the Blue River included grading, excavation, and backfill. Part of the stretch included areas designated as wetlands that were not to be disturbed. (Photos: Rocky Mountain Custom Landscapes, Inc.)

“We used some natural-type sprays,” he says. “In a lot of cases, the only thing that would work was temporary metal screening around the bigger trees.”

All the screening will ultimately be removed, but for now, it remains until things get better established. And, Wells says the animal incursions are a mark of success for the job.

“The whole goal of the project is to attract the wildlife,” he says. “We want them to use the area, along with people, so it’s really ‘mission accomplished’ if they’re coming already.”

In the meantime, Rocky Mountain Custom Landscapes is still at work on the Blue River. Wells says the company spent part of summer 2018 further south on the little river incorporating a lot of the same plant and hardscape materials and they were back on that site once the weather allowed, with a completion goal around Independence Day this year.