Even with some competition and a budget, the team at Landscape Concepts Management in Chicago successfully redesigned this under-used courtyard.

Renovating the courtyard at the Clybourn Lofts near Lincoln Park in Chicago could hardly be considered an average, run-of-the-mill job and it certainly didn’t prove to be for designer Ned Fleming and the team at Landscape Concepts Management.

The building itself dates to 1918, when it began life as a Baldwin Piano factory. In the 1980s, it was converted into 57 lofts by the well-known local residential architecture firm of Pappageorge Haymes Partners, which also did the original landscaping. 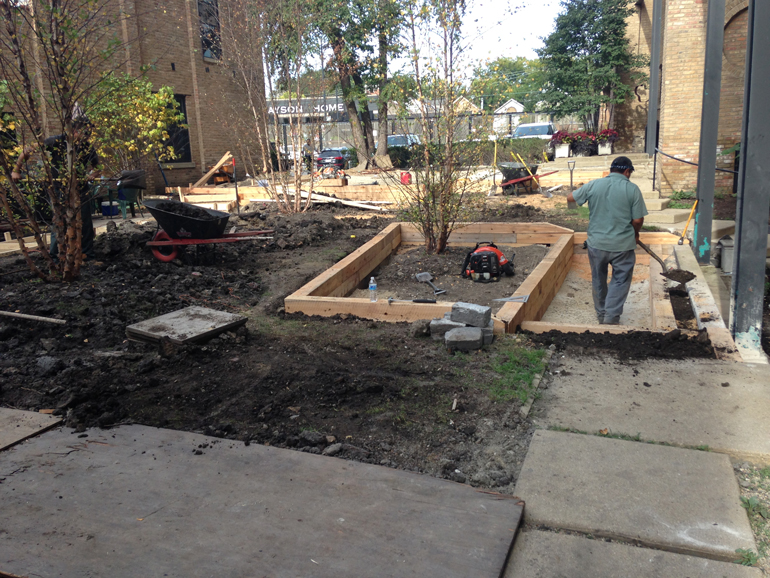 Earlier in the decade, the courtyard had been re-landscaped, a move which had not gone over well with some of the property owners. So, in 2014, they invited three firms to come in with proposals for a renovation.

“The courtyard looked like a little cottage space with a simple brick pattern,” says Fleming. “It was all grass and very open, and they were dissatisfied. So, the three companies here in Chicago came in and we did presentations to the people on the board and other community members, and they selected LCM to do the project.” 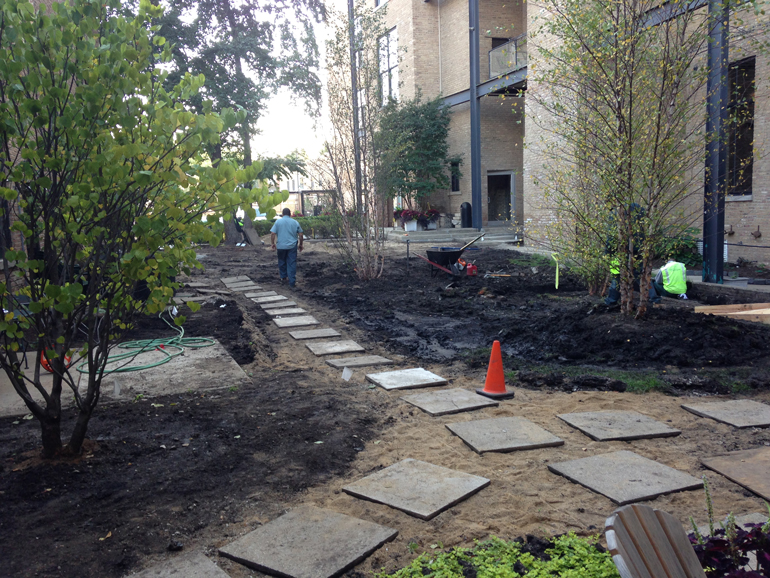 One caveat: the board had allocated $60,000 for the job which covers approximately 4,500 square feet.

“I liked knowing that up front, although if I were to go back and do the job again now, I probably would have added additional funds,” says Fleming. “But, we were able to pinch pennies and work within our budget. And, they’ve been very satisfied.”

Although Fleming modestly suggests that part of the reason LCM got the contract may have been that it made the last of the three presentations a more likely reason is his developing his design after careful consideration of the original installation. 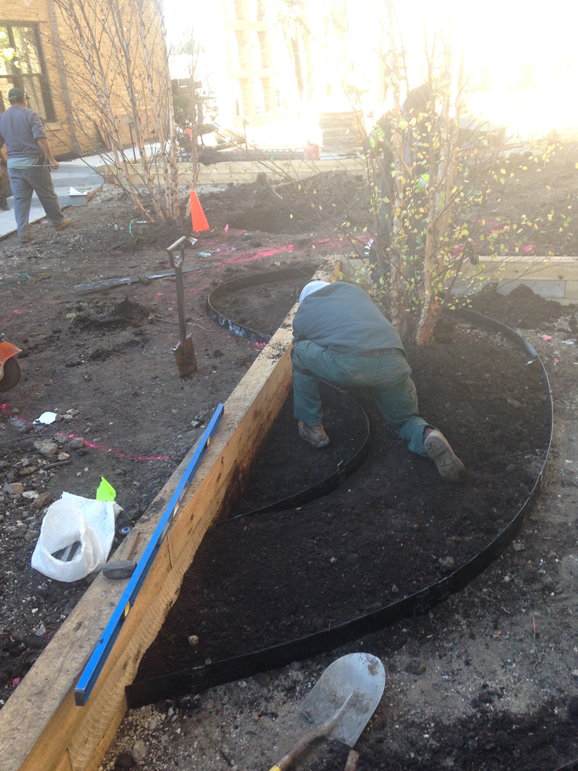 “For instance, each of the little patios that face the courtyard is shaped a little differently,” he says. “They don’t face each other and they aren’t squared off, which I thought was super neat. As we were designing the space, we used as our general principle, that if they hadn’t used direct lines, we should try to work with their patterns.”

That meant constructing rotating concrete stairs, using timbers to construct multiple levels and reverting to the original walkways, which were made of concrete steppers surrounded by pea gravel. At the same time, Fleming could accommodate the owners’ wish to double the size of the common patio area in the courtyard. 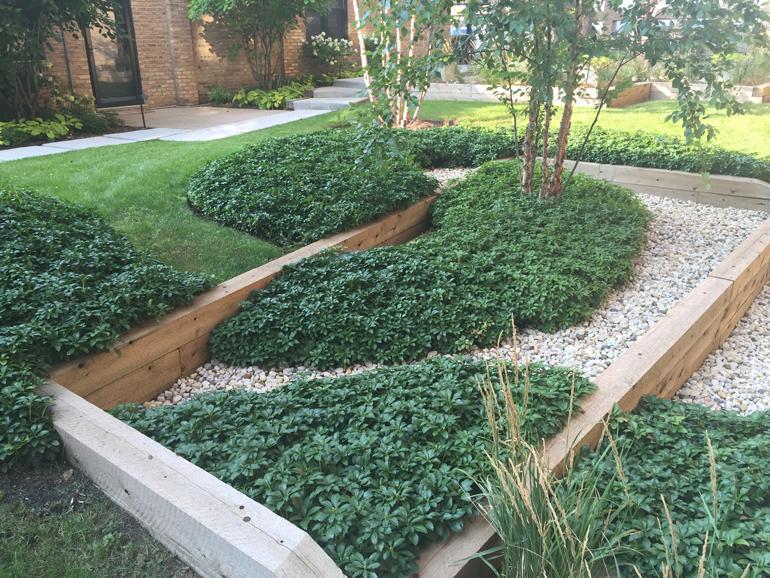 “We pretty much did an entire renovation on the space,” he says. “We stacked and saved the existing pavers (which were used for some edging), but on the whole, we came in and wiped out just about everything and then reinstalled a new design.”

Doing the work wasn’t easy, either. While Fleming says certainly one challenge to the project was working with a community of 57 owners and its board — a problem that was resolved by dealing with only a couple board members directly – access was also difficult.

“We had to remove a fence and take down some shrubs to access it from the parking area; there was no easy way in and out,” Fleming says. “The skid steer fit only by a matter of inches, and we used some really large trees that weren’t able to be lifted.” 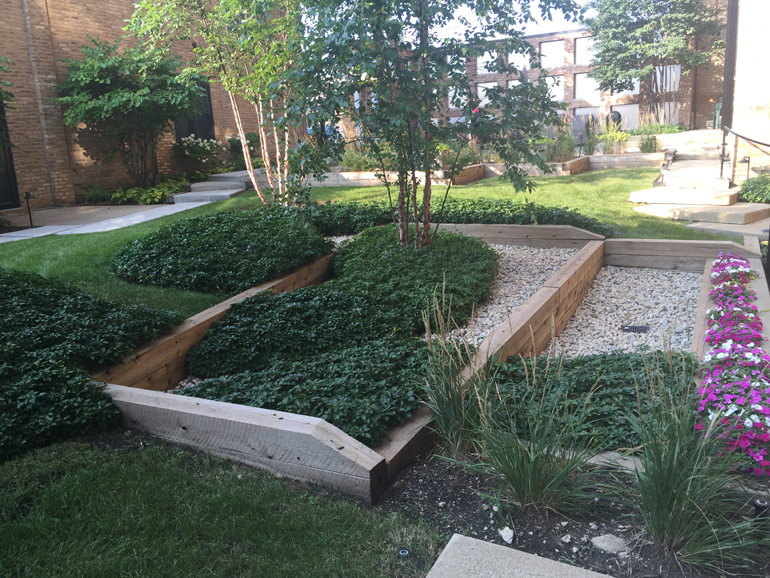 Although the area has only a few feet of grade change, Fleming says it was enough that the large grassy area that went in on the previous renovation tended to funnel rain to the bottom where it left a wet spot in the grass.

Rather than try to flatten it, the designer opted to put in tiers, with the expanded patio space at the highest level – supported by timbers. It then drops to the grassy level, and then into a rock garden, which handles drainage at the site.

“Drainage is why we included the rock garden to begin with,” he says. “Originally, the rock garden was to be one tier, but we weren’t able to move some old pipes because of the building codes, so we opted to separate the rock garden into two tiers.” 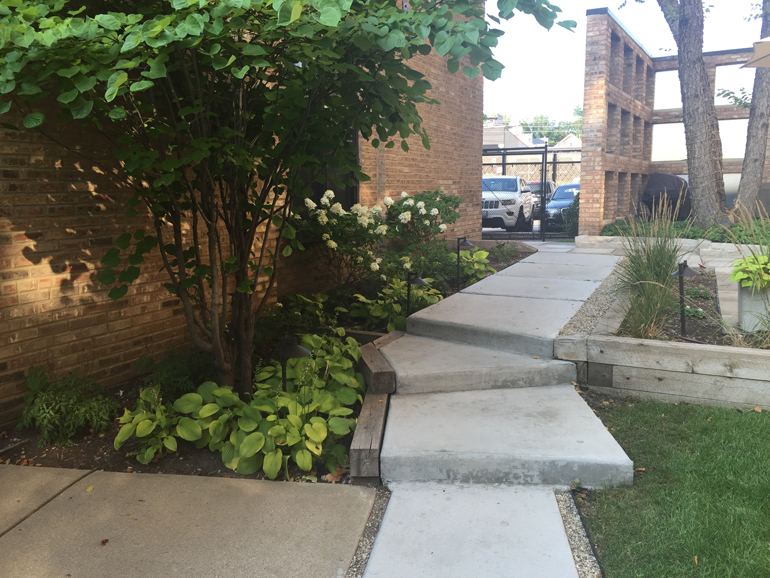 The rock garden, and more specifically the mounds of Pachysandra that set it off, is the feature that makes Fleming smile. He says it was a last-minute addition to the design to help break up the space.

“It really helps to separate it,” he says. “The Pachysandra has the strongest pull, but the rock presents a really strong contrast in color. That’s by far my favorite part.”

Along with the pachysandra, the plant palette for the project includes Hornbeam, Hydrangea, Hosta, and Astilba. 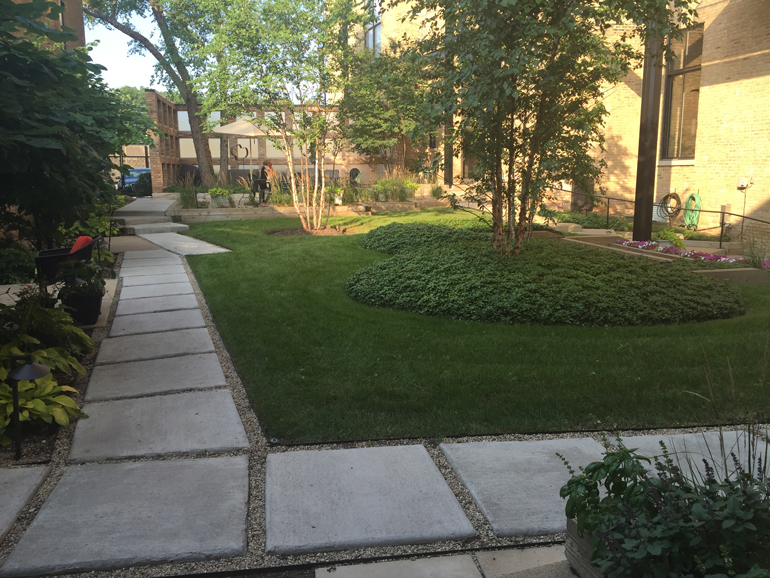 “We did a simple plant palette,” says Fleming. “They also had a beautiful river birch on site, so we installed three more of them. It’s a fairly shady space, which is why we used the mix of Hosta, Pachysandra and Hydrangea. The homeowners wanted to get some pink in the mix, too, so we included Clumped red buds, as well.”

There’s also a strong wind current that comes from the southwest side, he says, so he chose to use Hornbeam as a wind screen.

Construction of the job took approximately two-and-a-half weeks with a five-to-six-man crew, with additional team members coming in for some of the specialty work on irrigation and lighting. LCM continues to serve as the landscape maintenance provider for the site. 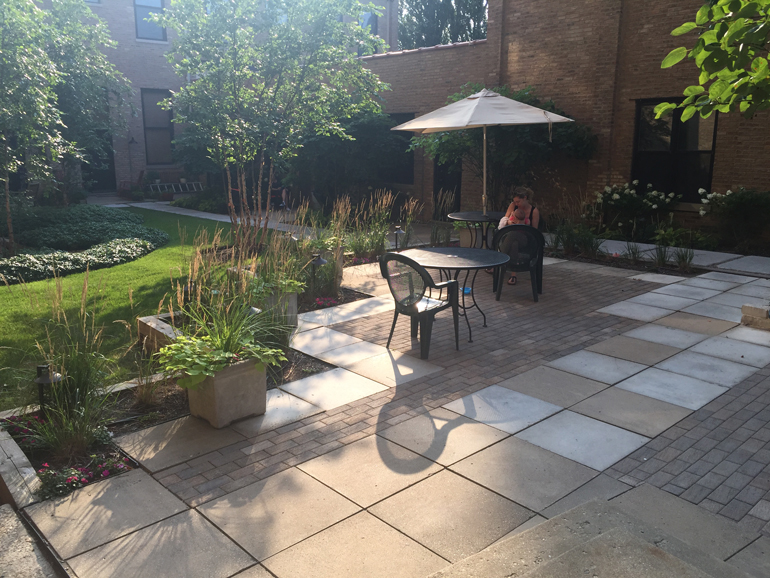 Fleming says he’s particularly proud of the way the job maintains the integrity of the space, as well as referencing the architecture as it was originally designed. As a former neighbor of the property, he adds that it’s gratifying to drive by and see the patio being used.

“I’m glad my design is liked and that the clients are happy,” he says. “That’s what we strive for when we do these projects. Plus, everything is still alive and healthy. We’ve made very little repair to any of the project.”

Adding to Fleming’s pride is the fact that the job won a Merit Award from the Illinois Landscape Contractors Association, in part because it truly was a learning experience for a young designer. 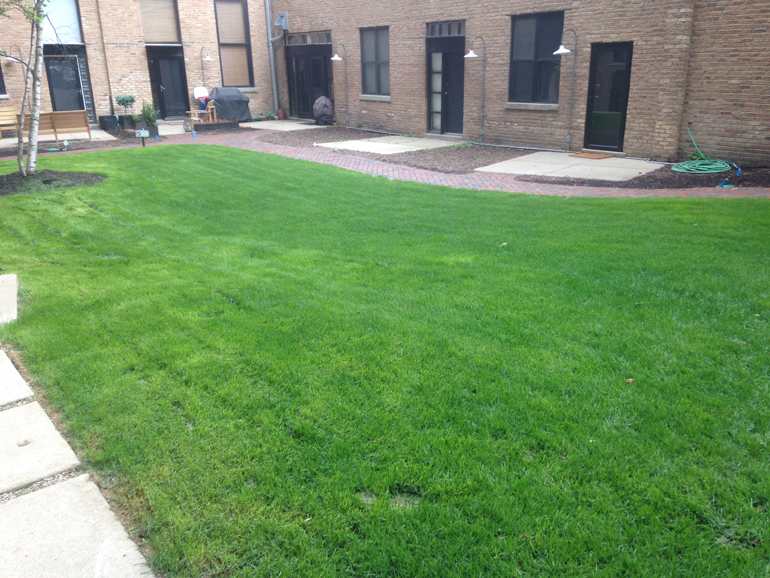 “This was my first large project here in the city,” Fleming says. “The former branch manager helped me with the bidding process. We have foremen who have been working here for years, and I sat with them to go over my ideas and how we could make them work. We had different crews for the lighting and the irrigation and the landscaping, so I learned I have to work with a lot of different people to come to the conclusion.

“I’m still learning from everyone, and that’s what made this experience great,” he concludes.