The grand finale for this property is a massive waterfall with five different outflows into the property’s existing pond.

James Godbold admits the job that won Hill’N Dale Landscaping two awards from the Landscape Ontario Horticultural Trades Association may be the grand finale for this client.

Although the team might still be called in to do what he calls “a few little additions,” he explains that over more than a decade they’d re-landscaped the front and side yards of the property and installed a multi-zone irrigation system before taking on the backyard. 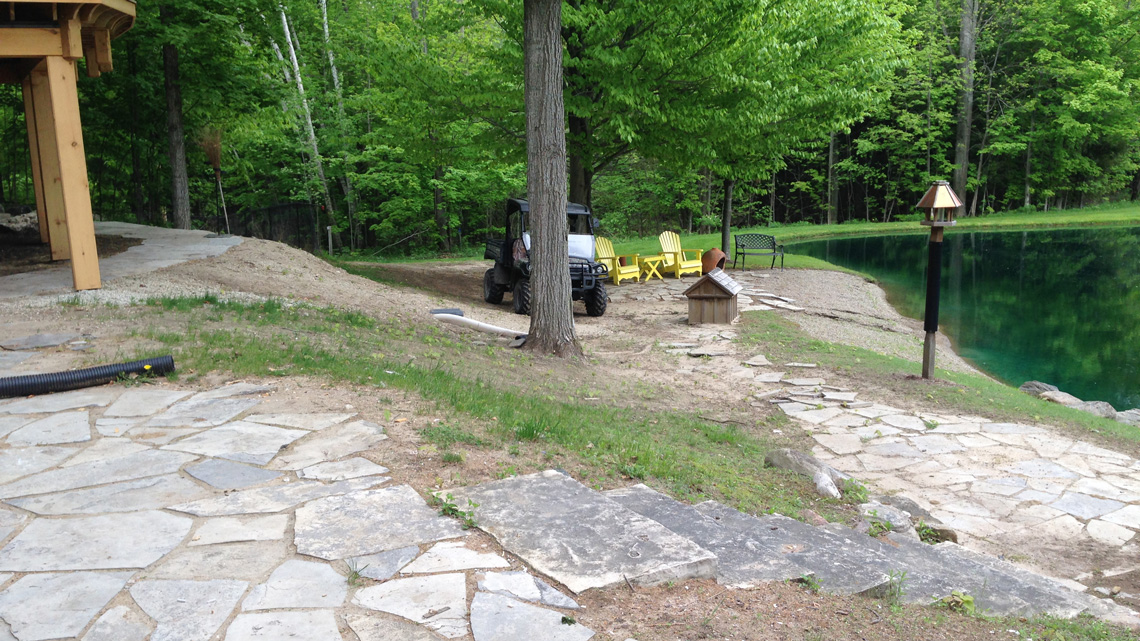 “The backyard has been on ongoing design/build effort because they were doing other things,” Godbold says. “For awhile it got put on the back burner, but we are finally finished.”

And, what a finish it is. While the job includes a flagstone patio, stone walkways and steps and an award-winning lighting system (the other recognition came for construction), the piece de resistance is a massive waterfall with five different outflows that when operating at full strength recycles a full 600 gallons per minute into the property’s existing pond.

In many ways, the waterfall was the project’s driving force. Godbold explains the clients have lived on the 20-plus-acre property for several years and both they and he felt the existing waterfall wasn’t quite right. 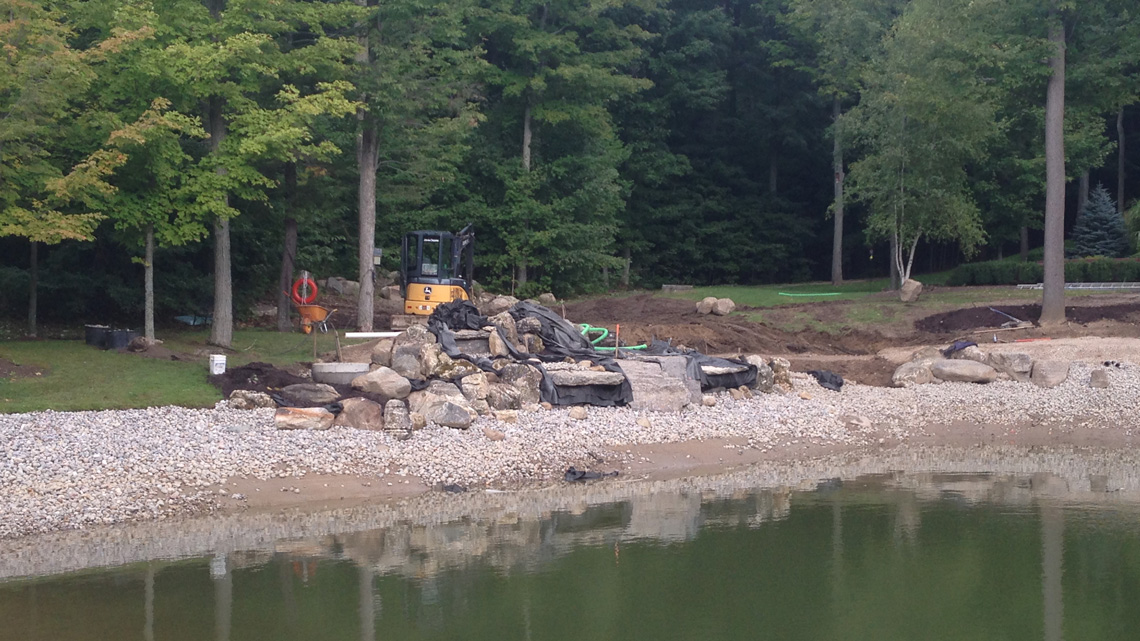 The waterfall was also a driving force in sizing the finished design. Godbold explains that the clients have a screened-in porch on one side of the house and a deck on the other side, and they wanted to be able to see it from both locations. They also wanted a dock at the pond from which to enjoy it.

“We basically laid it out with five different falls, and where you sit depends on what you see,” he says. “Now that the plants are growing up, it masks some things, but it gives different perspectives on it.” 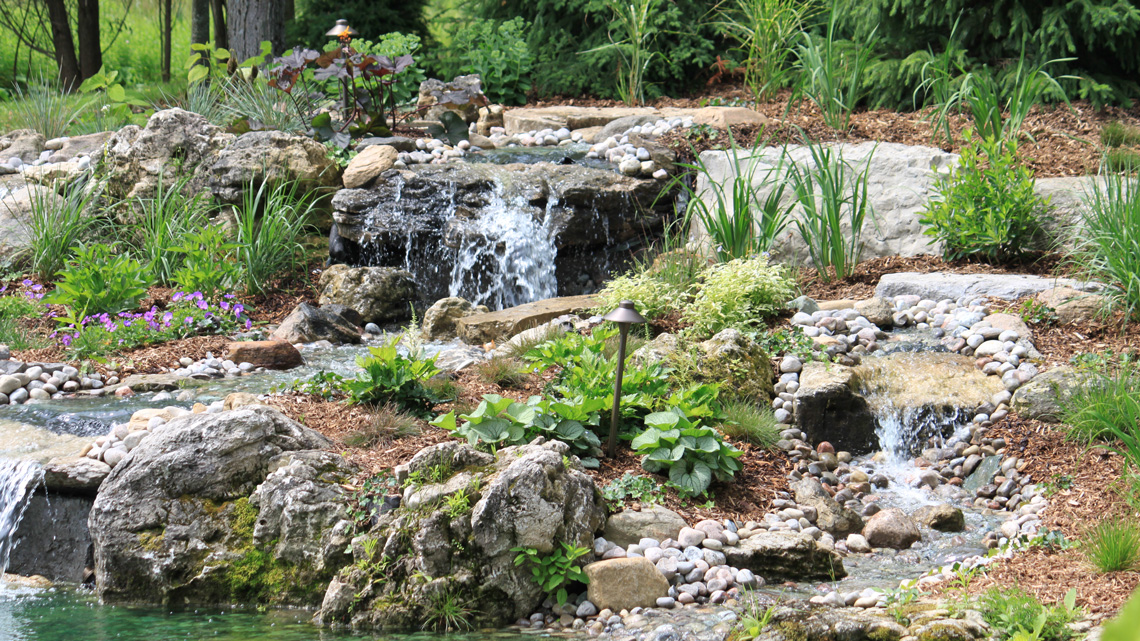 After tearing out the old waterfall, his team spent a lot of thought determining the best way to build the new waterfall, which is run by a three-inch pump and a valve system that controls how much water comes out of each of the five pipes at any given time.

“It sounds complicated, but it’s not,” he says. “It took some thought, but it’s a fairly simple system. The big challenge was trying to get the correct number of gallons-per-minute.”

Not surprisingly, both the waterflow and the lighting system are controlled from the house. 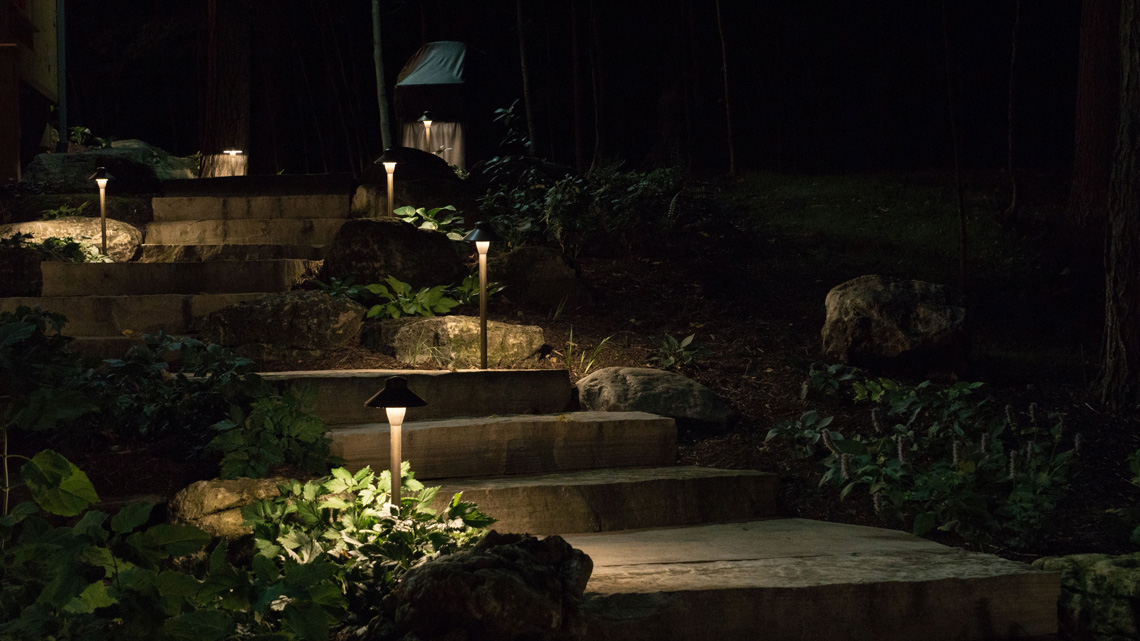 All the stone for the job – boulders, stone steps and flagstones – is Ontario limestone. Godbold says some of the boulders in the waterfall are as large as five tons, and one of the biggest challenges he faced with the job was getting the equipment back to build it.

“There was only one way in and that was driving between the pond and the house to get the equipment in,” he says. “We then had to work our way backwards off the site. We really made a roadway, but the logistics were one of the bigger challenges.” 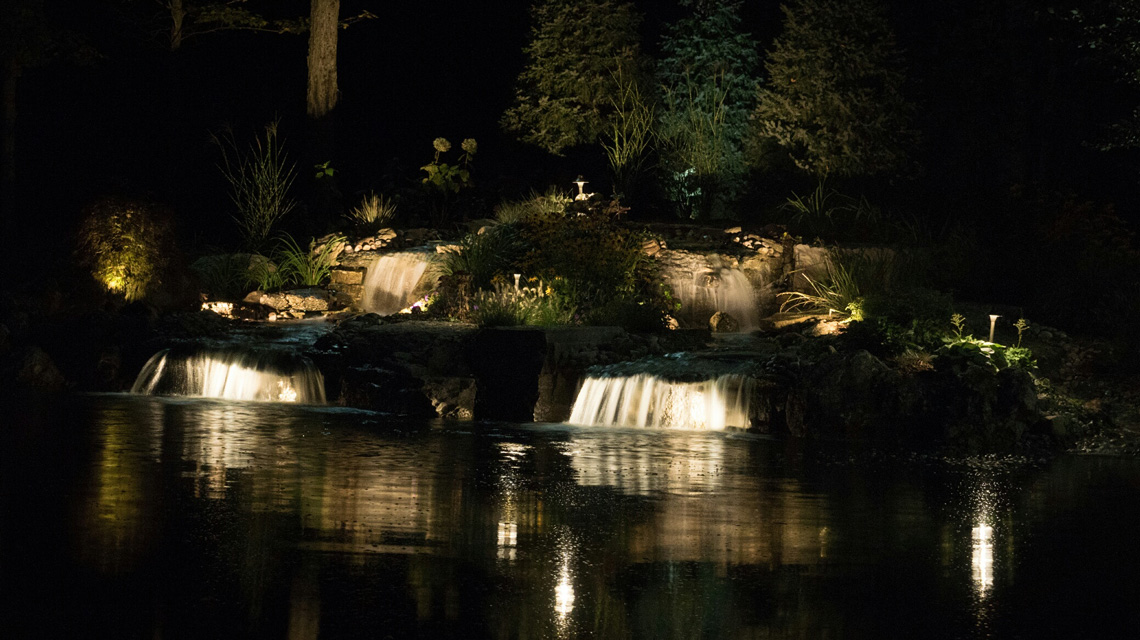 The job also required partially draining the pond – which also provides water for the 15-zone irrigation system – for the placement of additional boulders and lighting. A carpenter who regularly works for the clients built the wooden dock.

Godbold describes himself as a big fan of lighting, which may help explain the lighting award for this project, and the fact that he personally loves to look at the waterfall when it’s lit. The job incorporates three different styles: downlights, up lights and path lights, plus the underwater lights in the pond. 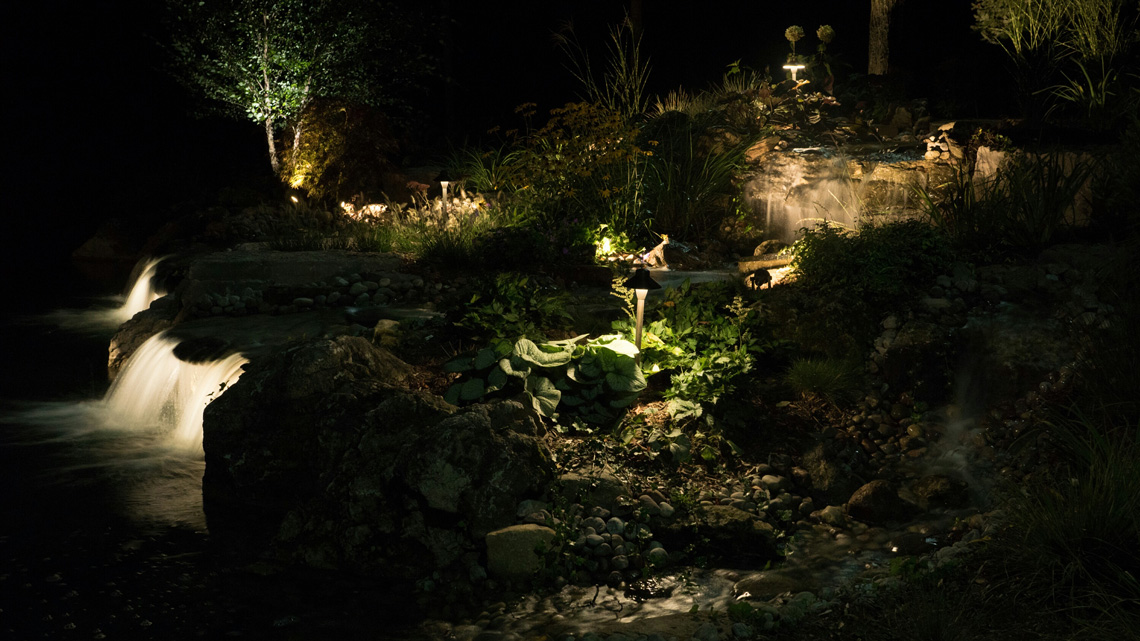 “I wanted it to not look too busy, but also to be safe,” says Godbold. “With the stone steps, we wanted to make sure they could see the step grades for safety purposes at night. You’ll see they’re fairly bright because we wanted to reduce the shadowing of the grade changes.”

He adds that the wrong light in the wrong place can make things harder to see and less safe.

The flagstone patio and walkways are also replacements for what was there. Godbold says the new construction features larger flagstones with butt joints to eliminate as much as possible gaps between the stones.

The plantings for the project are all chosen for the Zone 4 location.

“It’s a mix of about 60 percent shrubs and 40 percent perennials and grasses,” he says. “We like to use a lot of ornamental grasses and a lot of mass plantings. We wanted a mix of spring, summer and fall color, with a bit of winter interest.”

Work on the project extended for more than a calendar year, Godbold says.

“We started in July of one year and finished up in August of the following year,” he says. “But, that’s sort of deceiving because we don’t work from mid-November to mid-April because of the snow and the cold. It really gave us a full season.” 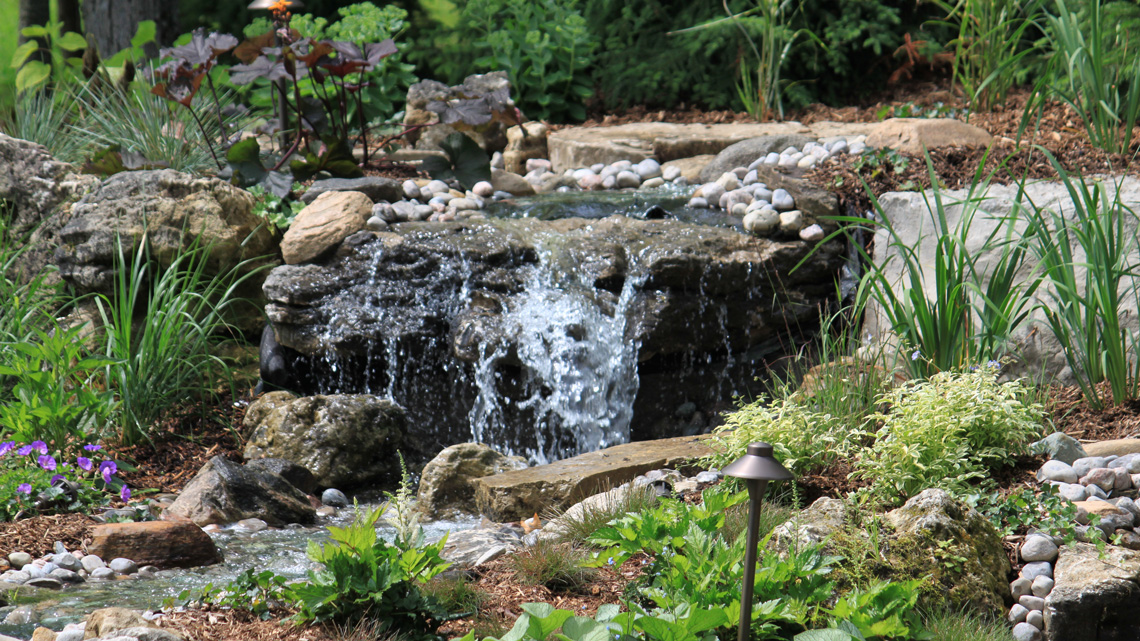 Most of that time, Hill’N Dale had no more than four people at the site simply because of logistical issues. A larger crew completed the plantings.

Along with the lighting, Godbold says he’s quite pleased with the way the entire project came together. And, as with any other job, the team learned a few things.

“Particularly with the waterfall, you learn little tricks along the way so that you know how to do things better the next time,” he says. “These are not cookie-cutter jobs; each one is custom and everything is not installed in the same way.

“When we analyze things after any job, we’re always trying to figure out how to do something better or quicker,” Godbold concludes. “Here, we learned a few new tricks for the water feature installation, and a couple good ideas for the lighting.” 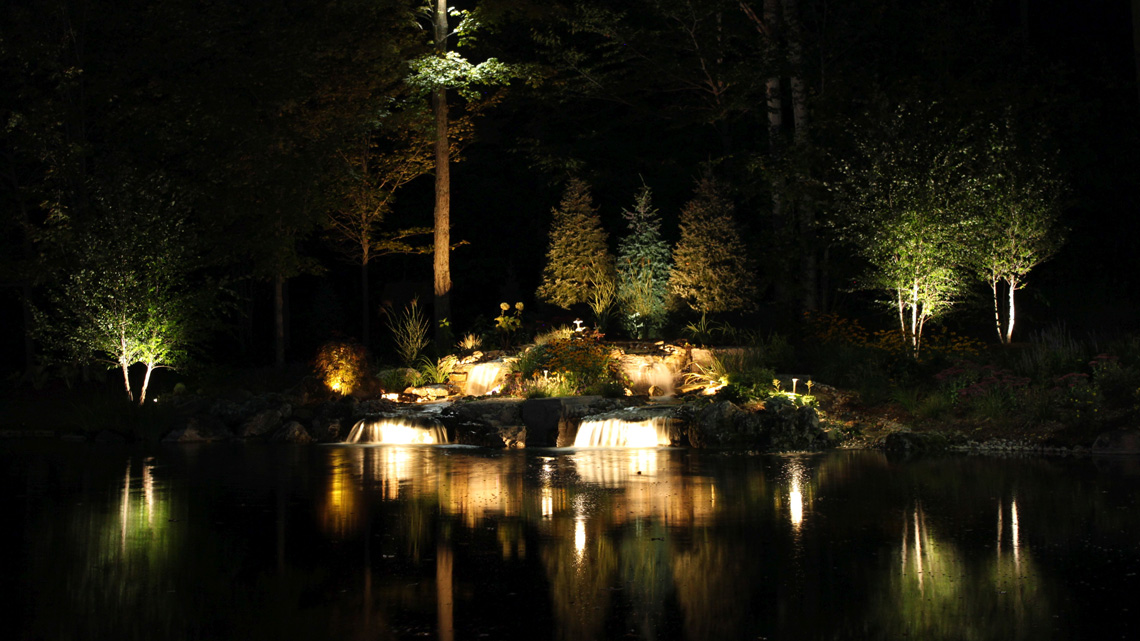 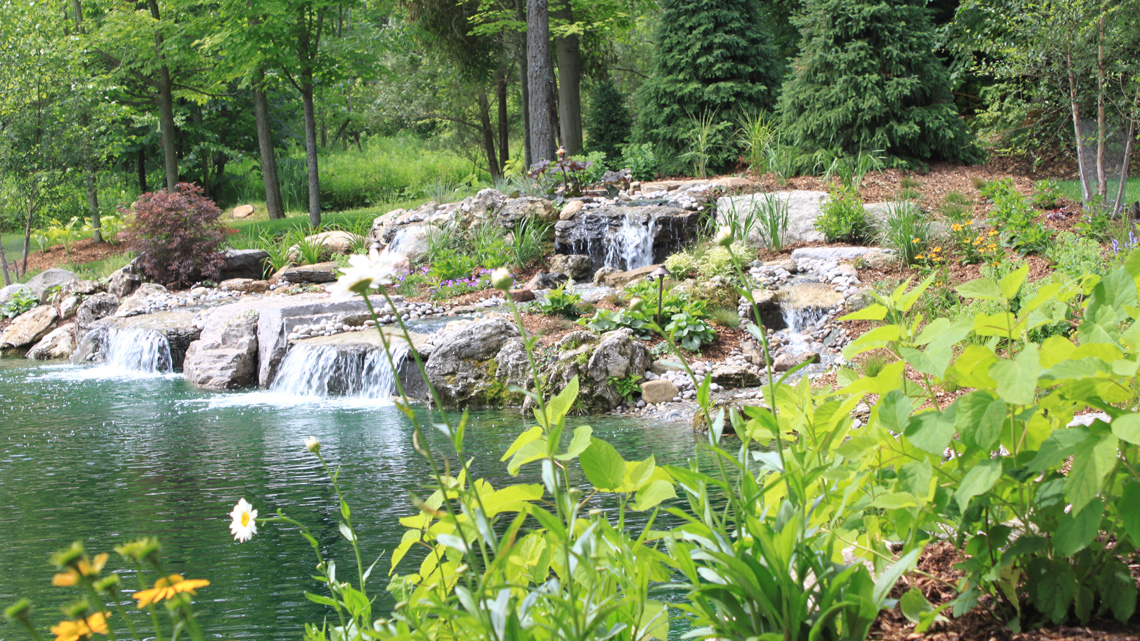