Chasing The EXPO’s Biggest Trends In My Socks 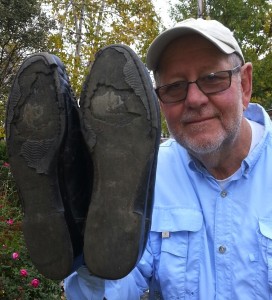 I broke a cardinal rule as I packed for the recent GIE+EXPO in Louisville. I packed a pair of comfortable but cheap shoes to wear there. By Friday at noon, after crisscrossing the show floor and the 19-acre outdoor demonstration area for 2 1/2 days, the soles of the shoes were shot. I was literally walking in my socks. Ouch! That’s probably all I need to share about my feet.

Let’s get to the GIE+EXPO itself. Two things stood out to me: 1. The energy and size of the show, and 2. three big trends that I saw there.

First, here’s a short recap of the size and scope of this year’s record-breaking event:

As for the trends, let’s start with the most obvious in terms of visibility and attendee interest—commercial mowers. The EXPO was again awash with big and busy displays of mowers in almost every imaginable color except pink. This year the big news from every manufacturer that I spoke with (and every mower that I demoed) was ergonomics, including operator comfort.

Responding to end-users, manufacturers added features (in some cases as options), such as air-ride seats, shocks/spring combinations making for smoother rides over bumpy terrain and more accessible and user-friendly controls. This is a big deal considering the number of hours operators put on their mowers each day. Whether the operator is an owner doing production or an employee, anything manufacturers can do to comfortably keep operators’ fannies in mower seats, hour after hour, day after day and week after week, is a win.

The other thing that jumped out to me at the show was the proliferation of commercial stand-on mowers. Just about every manufacturer now offers a line of stand-on mowers with various engine and deck-size options. Sales of stand-on mowers, in terms of percentages, have been growing faster these past few years than commercial mid-mount and front-mount mowers, several company reps told me.

What’s the advantage of a stand-on versus a sit-down mower? One rep told me some operators feel they are more comfortable to use given that operators can absorb the energy of the mower going over ground in their legs and knees rather than their backs. Another advantage is that commercial cutters can put three of these units on a trailer rather than two sit-down zero-turn mowers.

Battery-power ready for the big leagues? 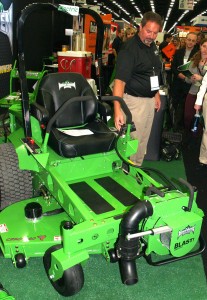 The second major trend I saw at the show was the interest attendees showed to display’s of battery-powered landscape equipment. Landscapers directed most of their attention to handheld and backpack gear, but the Mean Green Mowers booth, with its battery-powered commercial mowers and handhelds, drew a steady stream of visitors, as well.

Makita made a big splash at the show with its impressive line of battery-powered offerings as did STIHL. But traffic remained brisk at the booths of other companies, such as DeWALT, Oregon, Black & Decker and GreenWorks.

What impact is battery-powered equipment having on the commercial landscape industry?

That’s hard to judge as the category is so new. That question remains undecided among the few contractors that I chatted with at the EXPO. Certainly, the impact will grow as battery technology evolves and is combined with more advanced product design.

The third big trend evident at this past EXPO was the continued arms race (for want of a better term) among engine manufacturers Kohler, Kawasaki and Briggs & Stratton. Kohler and Briggs & Stratton touted their expanded lines of engines featuring closed-loop EFI engines. Kawasaki promoted its new open-loop EFI system. The many advantages of EFI (especially fuel savings) over carbureted engines has been a game-changer for many professional mowing companies.

Commercial mower manufacturers, realizing brand loyalty remains strong in the industry, offer contractors the choice of several engine brand options in many of their models. It will be fascinating to see the innovations that engine manufacturers, including companies such as Honda and Subaru, provide the industry in the years to come. The past decade has seen some incredible advancements in fuel savings, reliability and durability in engine development. Contractors are smiling.

Stay tuned to Turf magazine, both its digital news and monthly print publication, as we dig deeper into these and other trends and how you can benefit from them. 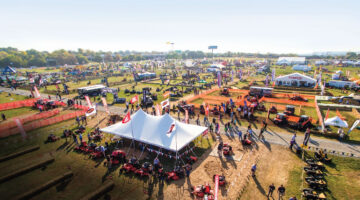